Lewis Hamilton says Formula 1's racing rules are still "not clear" despite the drivers having lengthy discussions with the FIA following Max Verstappen's controversial defence against him in Brazil.

But Verstappen disagrees, saying that after the drivers' briefing in Qatar ahead of this weekend's inaugural F1 race at the Losail track, which is understood to have lasted over an hour, that the situation "was in the end pretty clear".

After the Sao Paulo event, stewards ruled that Mercedes' request for a right of review into the decision that meant Verstappen's initial defence at Interlagos' Turn 4 did not to be fully investigated, the F1 pack held long talks with race director Michael Masi on Friday night in the usual drivers' briefing slot.

Verstappen said the briefing consisted of drivers "sharing their opinions and then the FIA explaining their process of thought behind it", but F1's two leading drivers were left split on the matter in their comments following qualifying in Qatar on Saturday evening.

After Hamilton had claimed pole but a massive 0.563s over Verstappen, he was asked if it was now clear what defensive driving was acceptable following the Qatar drivers' briefing, to which he replied: "No.

"It's not clear. Every driver, I think, expect for Max, was asking about just for clarity. Most drivers were asking for clarity, but it wasn't very clear.

"So, yeah - it's still not clear what the limits of the track are. It's clearly not the white line any more, so when overtaking. So we just go for it and...

"We just ask for consistency. So, if it's the same as the last race then that should be the same for all of us in those scenarios and then its fine." 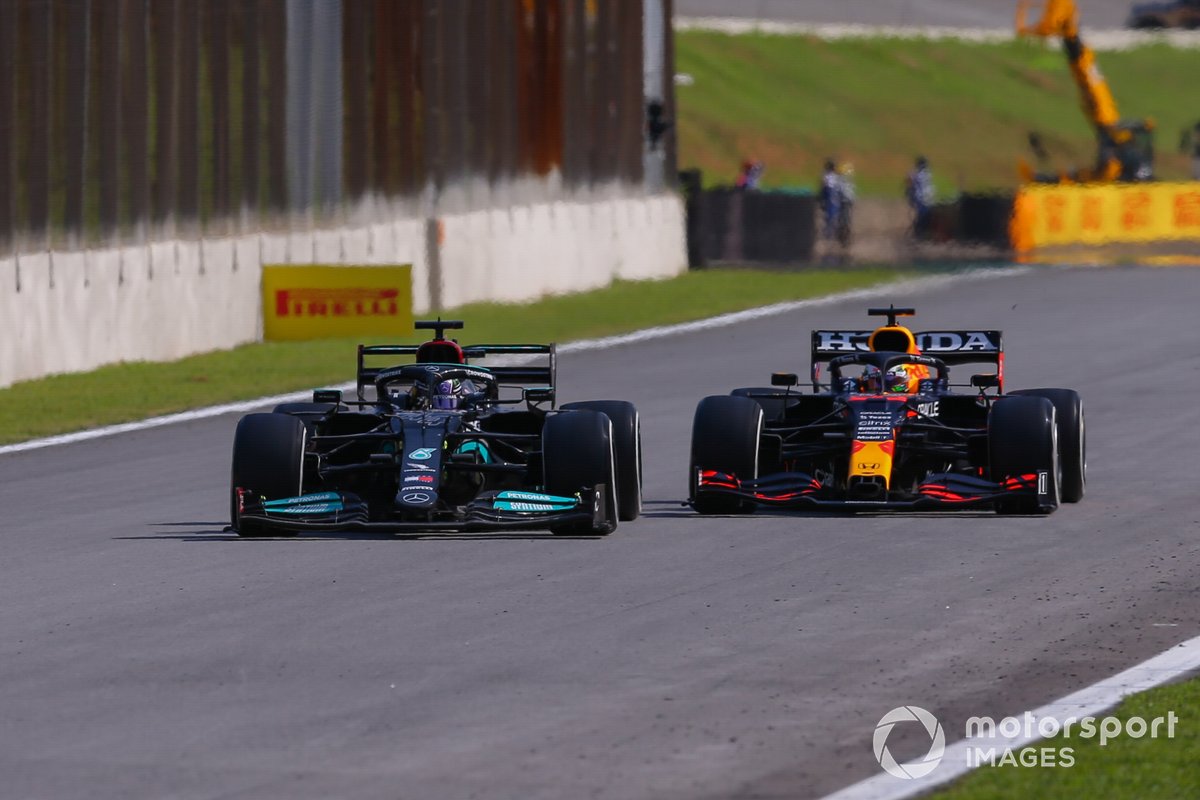 Verstappen, who answered before Hamilton, said: "Everyone is different, right? And everyone has their own way of racing and defending and overtaking, and of course it's very hard for the FIA as well to get everyone on the same line.

"Of course, they decide, but every driver has a different opinion and then I think yesterday it was all about sharing their opinions and then the FIA explaining their process of thought behind it.

"So, I think we came a long way and it was a very long briefing. So, yeah, I think it was in the end pretty clear."

Hamilton later stated that should he engage in a wheel-to-wheel fight in Sunday's race then he would approach any such situation understanding "that what happened in the last race is OK".

But he then said the drivers had been informed that different stewards could rule differently if the same scenario that occurred in Brazil were to play out again.

"It's not clear, as I said," Hamilton continued. "They said it's going to be different with different stewards. If we had the same ones as last week, this week it is one way - so we'll see."

Valtteri Bottas, who finished third in Qatar qualifying behind the two title contenders, said of the racing rules confusion: "I mean, it is clear in that way that if it's a similar incident [as] in Brazil then that's OK.

"But obviously it's always a fine line, but also the consistency that's the key and for us to know exactly [what is allowed].

"I don't think we got really an explanation like what we actually can do or not.

"So, I mean every overtake, every defending is different, so I'm sure they try to do the best job giving the best penalties or no penalties.

"I don't think it really changes anything, we'll obviously go for it and at least we know that's what Lewis and Max ended up having in Brazil that that is OK. That's a good thing to know."