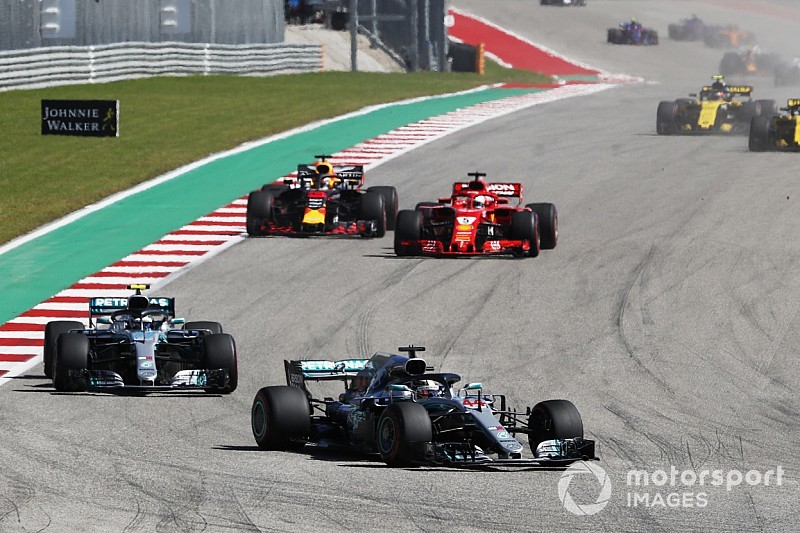 Lewis Hamilton says Formula 1 needs to sort some "fundamental issues" in order to make the racing better when it overhauls its regulations for 2021.

Hamilton cautioned that future rule changes should ensure that it's much easier to get close to other cars and be in a position to attack, and suggested that if that could be achieved, F1 could be the "best racing series ever."

Front wings are changing next year in an attempt to allow drivers to follow more closely, and research is ongoing for a bigger package of changes in 2021.

"I really enjoyed the race," he said when asked by Motorsport.com about the Austin race. "Kimi drove great, Max drove great.

"Seeing that there was three of us, at one point there was me and Kimi wheel-to-wheel, I thought it was awesome. I wish it went for longer in that first stint, and the next time that it happened.

"And then at the end with us three in that train I wished the race could continue, because it was awesome, and I was hoping that we might get to manoeuvre.

"But still fundamental issues in F1 being that you can't follow, so there's so big gaps between us all. So I really, really hope that whatever the guys are doing I hope they are making some good decisions for 2021.

"So that there's not a second and a half that you need to get close to a car. I hope it's a lot less than that. If you get it a lot less then we're gonna have the best racing series ever."

Hamilton suggested that the rules should ensure that there's not such a big speed differential between the top teams and the rest.

"How a Williams or a McLaren can be three seconds off a lap? That's a huge amount of performance. So I think they've got to change the rules to allow that gap to go so we can have more awesome racing.

"It's got the potential to be the greatest racing series there is, but you look at MotoGP and they are wheel to wheel, fighting from corner to corner."

Hamilton also rued he problems he had lapping traffic in Austin, which cost him huge amounts of time.

"I don't feel like it's entirely the backmarkers' fault. Here, tyre pressures have gone up, it's very hard to follow, so as soon as you get within five seconds you feel the wake from the car ahead. The car starts sliding more. So the advantage you have starts to disappear the closer you get.

"They've got a race to do, they shouldn't have to let off massively to give several seconds to you. So it's a bit of a difficult scenario.

"For example I was stuck behind two Toro Rossos, but I couldn't get close enough, and my tyres were getting worse and worse, and I wasn't getting close enough for them to have to lift off.

"So it is a difficult one. It was nowhere near as bad as somewhere like Singapore, for example."