Hamilton ignored instruction not to go for fastest lap

Lewis Hamilton ignored a message from his Mercedes Formula 1 team urging him not to go for fastest lap at the end of the French GP. 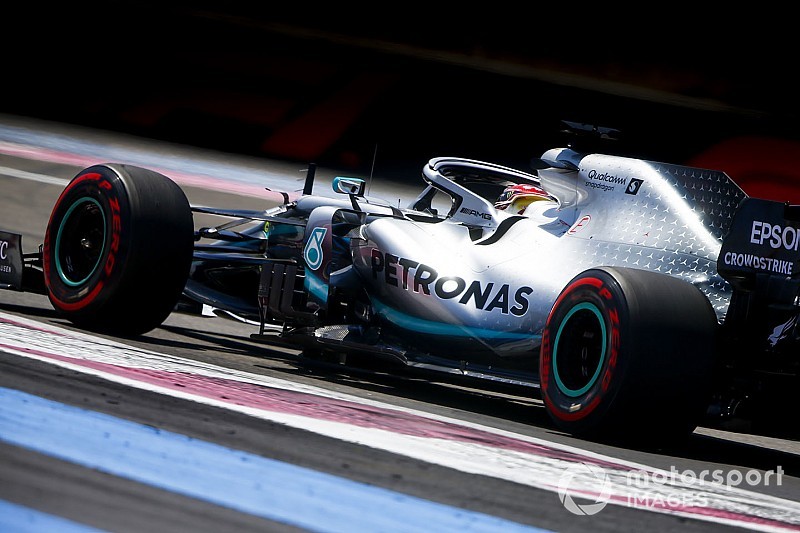 Hamilton was told several laps before the end of the race that fifth-placed Sebastian Vettel had a window in which to comfortably make a pitstop and go for fastest lap on new tyres.

Despite taking that information onboard with hard tyres that had run 29 laps, Hamilton posted a time of 1m32.764s on his final lap to briefly grab the fastest lap point.

However, having taken fresh soft tyres Vettel subsequently crossed the line in 1m32.740s, only just pipping his rival. The Ferrari driver revealed that he had been compromised by a battery issue.

Hamilton said having got so close was a reminder that he and the team always keep pushing.

"I think you should never give up and never be complacent and just think no it's not possible," he said when asked by Motorsport.com. "An extra point was available. Naturally the guys can't know how I feel in the car, but I felt like I had a little bit left in the tyres, and there was only one more lap.

"I was, 'I'm going to go for it man, let's go for it.' Even during the lap they were saying, 'Don't worry, he's got new tyres, there no way you're going to beat him.' As crazy as a driver is, I thought maybe I could get there.

"I didn't realise I'd be so close – there's things I could have done to make it happen. I don't think he had a perfect lap, I don't think he had full deployment, or something like that. I think that's a learning for us, never take things for granted and continue to push."

Hamilton's explanation was supported by the radio exchange with Peter Bonnington, which ran as follows:

Bonnington: So Vettel has stopped for fastest lap, so we won't bother going for it.

*As Hamilton approaches the back straight, clearly on a hot lap*

Bonnington: So Vettel on a soft tyre now, so expected to be a 31.

Hamilton: I hear you man, but if he doesn't do the lap maybe I'm alright.

Bonnington: Get in there Lewis. That was an absolutely blistering drive mate. Awesome race pace.

Hamilton: Phenomenal weekend guys. Just so proud of everyone. Thank you so much for all the hard, continued work. Let's keep it up.

*Further round the cool-down lap*

Hamilton: It was worth a try, the last lap.

Hamilton: How much was I off?

Bonnington: A couple of hundredths.

Hamilton: You can never have a defeatist mind, always got to go for things dudes.

Hamilton: I could have gone quicker if we'd planned it properly.

Bonnington: Yeah, copy, that's a lesson for us.

Vettel admitted that he expected to have gone faster, but insisted he was not discouraged that Hamilton could come so close with old tyres.

"Not quick enough!," said the German. "I was surprised myself. We tried to go as fast as we can. Before that it looked fine, the fastest lap was only a 1m33.5s, Lewis put a very strong lap in at the end.

"I can only assume he was cruising for most of the race before that. The tyre degradation was quite low, especially on the hards, so he was able to put a strong lap in at the end. But yeah, it was tight.

"We had a small issue with the battery so maybe not 100% ideal. I had a quick look at the fastest lap comparison and it was very close the whole lap. So, discouraging, no. Not more or less than the lack of speed we've seen now for some races."