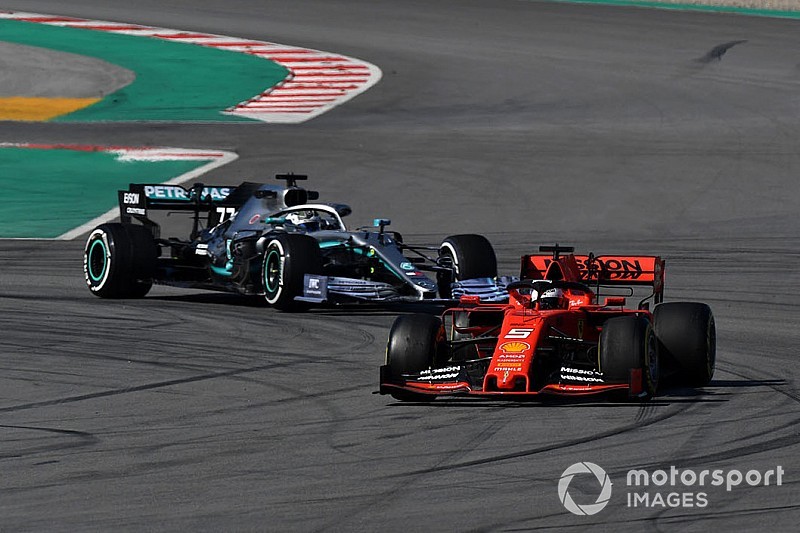 Lewis Hamilton has warned Mercedes must not be pushed "over the edge" by Formula 1 rival Ferrari's theoretical advantage at the start of the season.

Ferrari has emerged as favourite after pre-season testing, with Hamilton claiming the Maranello squad may be as much as half a second ahead of Mercedes heading into the season-opening Australian Grand Prix.

Hamilton believes Mercedes will have to dig deeper than last year in order to beat Ferrari this season, but cautioned against pushing too hard because it could lead to costly errors.

"It makes it harder for sure," said Hamilton of Ferrari's form.

"I think already last year we as a team were behind on performance so we had to overachieve on delivery, and now we have to reach even further, it means we have to squeeze our performance even more.

"But we also have to be careful in that scenario because it can also push you over the edge and you can have faults.

"We've got the best team around us. We have experience, it's no coincidence that we are world champions so we have to be diligent and stay balanced.

"But as a driver for sure I have to figure out how can I pull more out, which I don't have the current answer for."

The five-time champion reckons Ferrari may be reaping the benefits of having shifted its focus to its 2019 car earlier than Mercedes did.

"So mostly likely they started developing this car a month at least earlier than us maybe, whereas we were pushing to win the world title, which we did.

"It is generally how it is, you only have a certain amount of resources that you can use and you want to make sure that you solidify and win the current world championship or tail off and make sure next year is good but you don't know if next year is good because the rules have changed, so it is about trying to find a balance.

"I would not be surprised if Ferrari had more people because in Italy it is not easy to fire people – and it is different to when you are chasing compared to when you are defending, but the last year they arrived here with a car that was working well, but they have done even better this year.

Hamilton is confident, however, that Mercedes - which has won five drivers' and five constructors' titles in a row - is prepared to take on the challenge.

"We don't mind the challenge. We will fight. It just means we have to work harder. But I am really really proud of what our team has done to get us here today.

"It is not that I am worried or disappointed.

"We are just incredibly encouraged and enthused that we are working as hard as we are, we have a hill to climb but we know how to do it."

Why Renault’s bold F1 engine claims are hard to believe