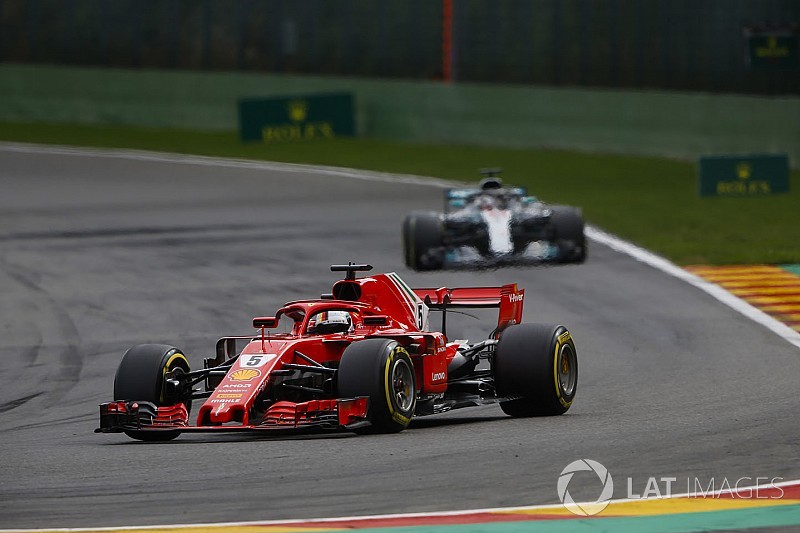 Lewis Hamilton says his Mercedes Formula 1 team needs to match the "trick things" that enabled Ferrari's Sebastian Vettel to beat him to victory in the Belgian Grand Prix.

Hamilton took pole in mixed conditions on Saturday and kept the lead off the line, but was passed by Vettel on the opening lap at the Kemmel straight.

The German survived a subsequent safety car restart in the lead and went on to win by 11 seconds over Hamilton, cutting the reigning champion's lead in the title race down to 17 points.

Speaking immediately after the race, Hamilton said Ferrari was aided by “a few trick things on the car”, which enabled Vettel's SF71H to breeze past him on the straight.

Ferrari's 2018 car has been subject to a number of investigations and clarifications over the campaign, and its hybrid system was looked into by the FIA – which ultimately declared it legal.

Asked to clarify his comments the post-race press conference, Hamilton was keen to point out that he was not alluding to the SF71H being in any way illegal.

“We all have trick things on our car. Trick is just a word for something special. I don’t know what’s on their car so I couldn’t tell you either way.

“I’m not saying they are doing anything illegal. We all have something trick. It’s just something that brings that extra bit of performance.

“They just outperformed us today. There are things they might have on the car that we don’t have and vice versa and we’ve got to find out what and improve on that.”

Vettel's winning margin was flattered by Hamilton and Mercedes opting to “save the engine” late on, but the Briton acknowledged Ferrari was faster both on the initial supersoft stint and in the second part of the race on softs.

“In both stints he had a little bit more pace than me.

“Towards the end of the first stint I seemed to be closing a little bit, able to match him, but in the end it made no sense [to push] – he was doing times I wasn’t able to equal.”

Both Hamilton and Vettel ran upgraded engines at Spa.

“We came here with a pretty good upgrade,” Hamilton said. “Generally every time we bring an upgrade they bring a bigger one.

“We’ve known for the last four races or so that they’ve had some things on their car that’s made them quicker on the straights. We’ve just got to work harder, I guess.”

Vettel, for his part, suggested the difference in straightline speed between the two cars could've also been down to aero set-up.

“I hope we have more power. If that’s the case, then well done to our engine guys,” he said. “We’ve been making progress especially for the last two years so that’s good news.

“We ran a little bit less wing so were faster in sector one and sector three. Sector two a little bit slower.

“I wouldn’t disagree that this year in terms of power we’re a lot closer. Last year we didn’t have a chance here. It’s good to see we’re making progress.”