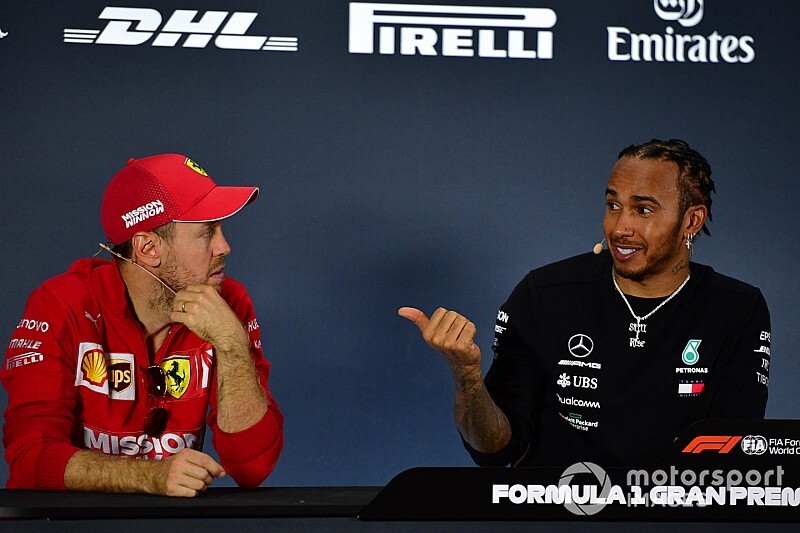 Lewis Hamilton says being squeezed by Formula 1 rival Sebastian Vettel at the start of the Mexican Grand Prix risked a "big collision" on a "hair-raising" first lap.

Hamilton was squeezed by Vettel on the run down to Turn 1 at the start of the race, a move he branded "dangerous", before briefly losing the rear of his car on the kerb exiting the corner as Verstappen tried to pass on the inside.

That moment almost caused Hamilton to hit Vettel's Ferrari ahead and although he ended up spearing right and forcing himself and Verstappen onto the grass he avoided contact and went on to recover from fifth place to win the race.

When Hamilton said in the post-race press conference that Vettel had tried his best to block him at the start, Vettel said he did not see him, then laughed: "But if I'd seen you, yes I would have tried!"

"And he just keeps coming and I had to avoid crashing with him on the grass, and avoid his wheels as well otherwise it could have caused a big collision for him.

"Then I was surrounded by a bunch of cars, braked into Turn 1 and all of a sudden Max is alongside.

"If you've seen races before I always leave Max a lot of space. It's the smartest thing you can do. But there wasn't a lot of space to give.

"Then I nearly took him [Vettel] out. My back end came out and went straight on the grass…it was hair-raising."

Hamilton joked about Verstappen's move down the inside that he got "torpedoed" by the Red Bull driver, who then squeezed Hamilton wide and triggered Hamilton's lurid moment.

He added "The first time! I thought at some stage I'd get torpedoed by Max!"

Wolff said: "I think this is clearly something is a combination of talent and learning and experience.

"He's really great. On a few occasions he took himself out of what would have been a race-ending situation.

"At Montreal with Sebastian, where he avoided contact miraculously [after Vettel went off and rejoined in a manner that squeeze Hamilton against the wall].

"Then contact here with Seb on the straight and then just a few seconds later being side-by-side with Max through Turns 2 and 3.

"He seems to have this great ability of putting this car in the right place."

Wolff described Vettel's move left towards Hamilton on the straight at the start as a "very hard move", but accepted the Ferrari driver said he did not know Hamilton was there.

"It was front right and left rear and these things can end up bad on the straight at [many] kilometres an hour," said Wolff.