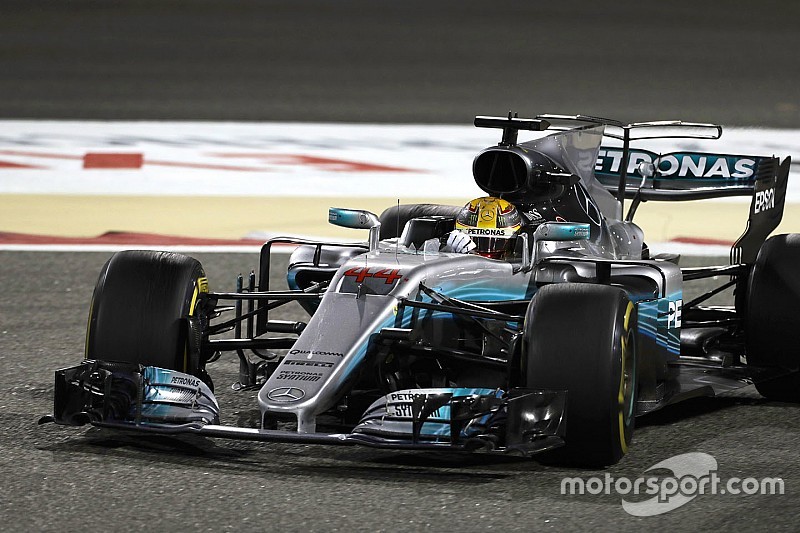 Bahrain GP runner-up Lewis Hamilton has taken the blame for the five-second penalty he picked up in the race for slowing down too much under the safety car.

Hamilton was running second between teammate Valtteri Bottas and Red Bull Racing's Daniel Ricciardo on lap 13 when the race was neutralised for a collision between the Williams of Lance Stroll and the Toro Rosso of Carlos Sainz.

With Ferrari rival Sebastian Vettel having pitted earlier and looking a major threat, Mercedes was forced to call in both its drivers under the safety car.

And as Hamilton stood to lose time behind Bottas during the Finn's tyre change, the three-time champion backed off significantly on pit entry so as to slow Ricciardo.

But a slow stop for Bottas meant Hamilton dropped behind the Red Bull anyway, and while he made quick work of Ricciardo on the restart, he subsequently picked up a five-second penalty.

"The pitlane [situation] was really my fault, so apologies to the team for losing time there," Hamilton said on the podium, the Briton having eventually finished 6.6s behind race winner Vettel.

He reiterated his stance in the post-race press conference: "Completely my fault with the safety car. I didn't know if I could catch up Vettel but the penalty made it twice as hard.

"Apologies to the team, but we still got good points for the team and still had a great fight."

Despite the sanction, Hamilton ended up finishing clear of pole-sitting teammate Bottas, who had been struggling to match the Brit's pace in the latter stints.

Bottas had complied with a mid-race request to allow Hamilton through as Vettel was pulling away - and, likewise, didn't put up much of a fight when his teammate charged past after making a late-race pitstop.

"Big thanks to Valtteri for being a gentleman," Hamilton said on the podium."

Asked about the team's request to let Hamilton through, Bottas admitted: "Honestly, as a racing driver, it is maybe the worst thing you want to hear, but that's how it is.

"For sure I did it because there was potential for Lewis to challenge Seb, but it didn't happen. Personally, it is tough, but that is life.

"I didn't have enough pace today and we need to find the reasons why."

Stroll, Sainz blame each other for accident

Alonso in fresh radio outburst over lack of Honda power