Schumacher and Hamilton compared, by those who worked with both

Lewis Hamilton’s achievement in matching Michael Schumacher’s career total of 91 grand prix wins has rebooted the discussion about how two of the greatest Formula 1 drivers of all time compare.

Hamilton is also set to match Schumacher’s total of seven world championships this year. However, it’s not just about analysing the statistics – what about their personalities and the way they went about winning?

The men who perhaps have the best appreciation of how they stack up are the guys who worked closely with both drivers.

As technical director, Ross Brawn was one of the architects of Schumacher’s successes at Benetton and Ferrari, and then as Mercedes boss he tempted him out of retirement in 2010.

Later he played a key role in getting Hamilton on board, although he left the team before the titles began to pile up in the hybrid era.

“It’s a remarkable achievement,” noted Brawn of Hamilton’s 91st win in his F1 column this week. “Michael always said that records are there to be broken, but I admit I didn’t expect to see this one broken so soon.

“And I can’t imagine Lewis is going to stop here. The way he’s going, he will raise the bar in the next few years to a level that will be astonishing.

“You couldn’t have two more different characters. Both have achieved an astonishing accomplishment.” 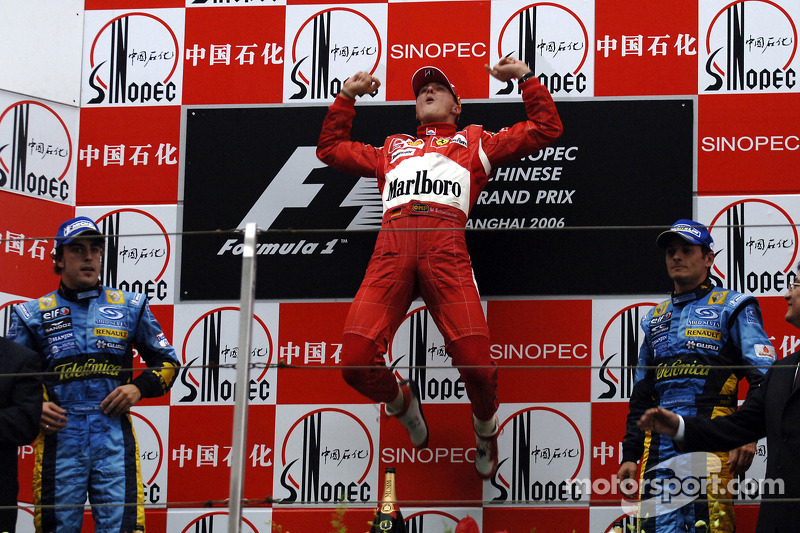 He worked with Schumacher in 2010-12, and has subsequently been a key part of Hamilton’s recent successes.

“The two characters couldn't be more different,” he said after Sunday’s race. “If you look at how they drive, when Michael arrived at our team, the things that stood out with him were the way he would always go after the marginal. It doesn't matter if it's a hundredth of a second, he'd try and do it. He'd sort of collect those up.

“Michael also had an ability to drive whatever balance was quickest, if it was an understeery car that he needed, he'd do it. If he needed to move the work onto the front tyres, he could. So he was very, very adaptable, in his driving style.

“And those are certainly two characteristics that Lewis very much has. A lot of the good drivers don't have a particular style, it's just whatever's quick, they'll adapt to do it.”

The greats have always been able to multitask, managing difficult situations in the cockpit while at the same time contemplating strategy calls and the sector times of their rivals.

“With Michael it didn't matter how many things you told him to do on a lap,” says Shovlin. “Whether it was moving the brake bias, where to look after tyres, what he needed to do to get them in the right window, he'd be able to sort of put them all together.

“And again, that's one that Lewis does. Quite quietly often, but you can just keep layering one thing on top of another and he doesn't forget it. He just sort of does it. And then if you give him more things to do, it's layered on top.

“So I think just in terms of the way they are in the car, they're actually more similar than you might believe. It's just that out of the car they're two quite different people.” 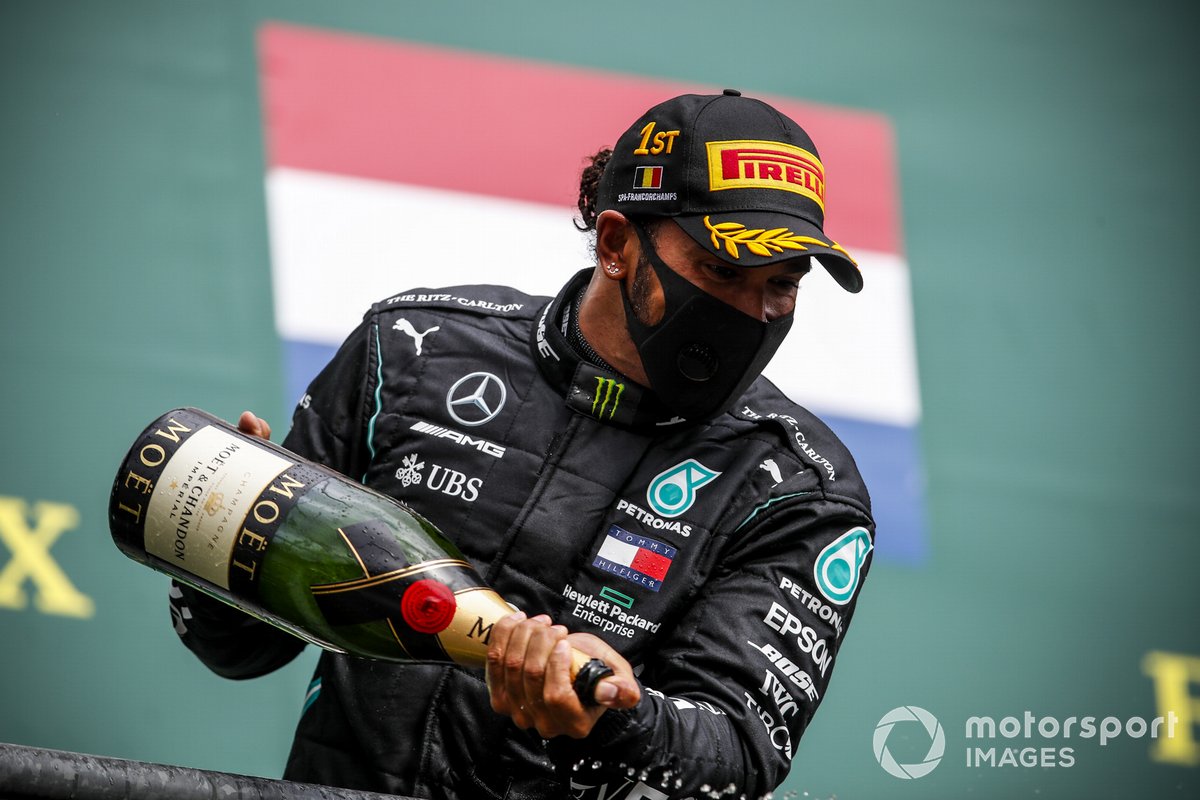 Race Winner Lewis Hamilton, Mercedes-AMG F1 celebrates on the podium with the champagne

Even the best drivers have room for improvement – indeed recognising that and acting upon it is one of the defining factors that makes a good driver into a great – and Schumacher was always looking for ways of getting more out of himself.

Hamilton was a proven world champion five years before he even joined Mercedes. And yet Shovlin says that he has improved enormously since his arrival at the Brackley team.

“If you think back to when he joined in 2013, he is a very, very different character, and a very different character I think in and out of the car. Obviously, our team's evolved a lot, we've got better, but a lot of it is how we changed working with Lewis to get the best out of him. And also he's kind of worked out how to get the best out of the team.

“When he started with us, he was instantly quick, he was brilliant at winning races, he had that ability to sort of dig deep and deliver whatever he had to on a Sunday to keep the hopes alive of a win.

“Now, he's so much more tactical, in how he views the year, and how he views how he works. He's not just looking for the improvements he can find, in how he's driving the car. It's just the whole way he's leading his life and how he's approaching the business of being a professional racing driver.

“And year on year, he comes back, and it's this sort of slightly improved version of the guy that you last saw in Abu Dhabi.

“But the level that he's at now is seriously impressive. It's just consistency, and the relentless way that he just goes about hoovering up the points and controlling the championships.”

Schumacher was known as a hard worker, someone who was always ready to meet with his engineers at Maranello or go testing in the days when it was unrestricted.

Hamilton is sometimes criticised for pursuing interests outside the sport – although in 2020 COVID-19 has inevitably impacted his social schedule – but his laser focus on his day job is not hampered.

“He works very hard,” says Shovlin. “And he's a driver that perhaps a lot of his rivals like to think of as just this person who's fast in the car, but doesn't put the hours in.

“And he's one of the hardest working drivers we've ever known. The more he can understand about tyres, about how the car works, about how to use all the available tools, and he's just able to take that and build it into his driving.

“And it's just this kind of relentless way that he looks at every missed opportunity as something that needs fixing before the next race. He goes off and works with Bono [Peter Bonnington] and Marcus [Dudley], his engineering crew, and with the wider team, trying to understand any issues.

“And it's just the way he’s constantly building his skill set. And so long into a career, you kind of think drivers top out on this sort of skill set. But Lewis keeps finding new and different things to do, and how to get the most out of the car and the tyres.”

Few people in the F1 paddock know Hamilton better than his team boss Toto Wolff, who joined Mercedes after Schumacher left. Like Shovlin he sees a relentless quest for improvement.

Wolff has no time for those who downplay Hamilton’s recent success because he’s had the best car for so long.

Like Schumacher he made sure that he was in the right environment at the right time. And thanks to lobbying from Brawn and Niki Lauda he recognised that the pieces would fall into place for Mercedes long before the rest of the world did.

“Winning races and winning championships is always in this sport a team exercise,” says Wolff. “But you need to put yourself in a position that you end up in the best car.

“You can see lots of talents and skilled drivers took wrong decisions, or not well-advised decisions, and in that respect it was him who joined Mercedes in 2013, and it is him that sits in the car and is able to execute on track with a tool that we provide to him. But it's always a tool, we couldn't achieve the records that we have, and he probably couldn't achieve the records, without the right car. Full stop.

“I don't want to allow these voices that say, ‘Well, he drives a Mercedes, it's obvious that he wins so many races.’ The drivers that say that, they should analyse why they haven't found a way into a Mercedes.”

Hamilton always downplays records and statistics, and that’s another characteristic that he shares with Schumacher, who was usually non-plussed when the latest numbers were quoted at him.

“When you think too much about points and race wins or championships you are getting distracted,” says Wolff. “I think you need to be as good and as close to perfection in every single session and try to score as many points as possible in the race.

“That is why you mustn’t look at too much on what could be and just concentrate on the task in front of you.

“For me personally Michael will always be the most iconic race driver. I remember watching those years with Ferrari and Michael. Whoever would have thought that his record could be broken but here we go, 91 race wins, something to be proud of but not something that could or should trigger too much complacency.

“That risk does not exist in our team as we relentlessly push for perfection and for tomorrow rather than looking back.” 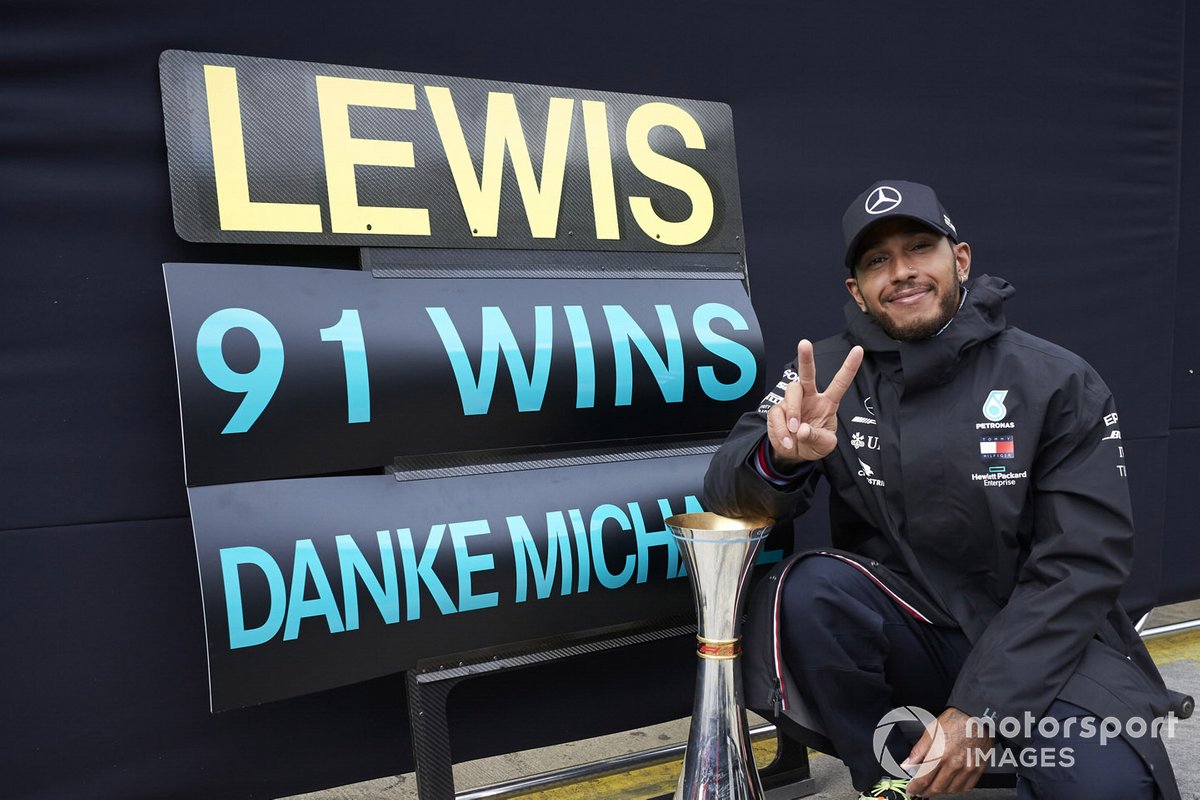 Ferrari could wait until Abu Dhabi to run Schumacher, Ilott