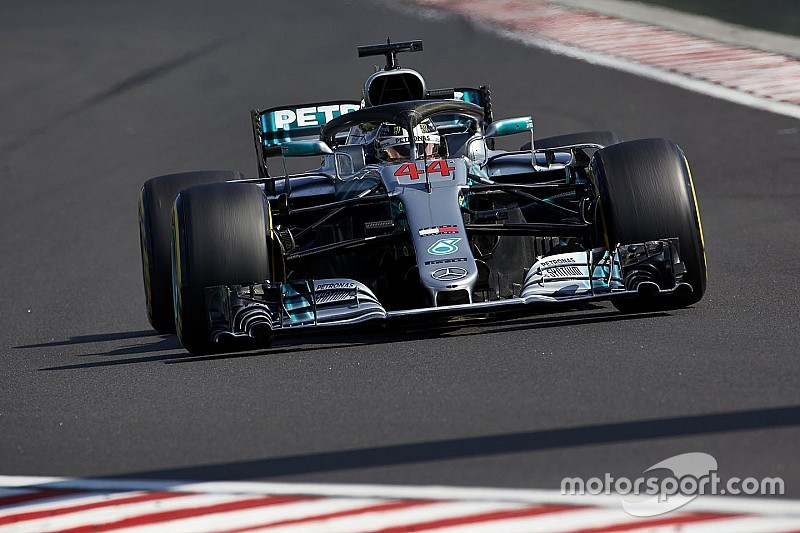 Lewis Hamilton says Mercedes' priority is to improve in qualifying because of the gains Ferrari has made in recent races.

Hamilton is equal with Sebastian Vettel on five poles from 12 races, with Valtteri Bottas's sole 2018 pole giving Mercedes a 6-5 edge over Ferrari so far.

He believes if Hungary qualifying had been dry, his Ferrari rival would have been on pole and "possibly gone into the distance", but Hamilton topped a wet qualifying session and won comfortably, helped by Vettel being held up behind Bottas in the second stint.

Addressing that race performance, Hamilton said: "For some reason the race is really our main strength.

"The current work and focus is making sure we improve in qualifying. We've had five poles out of 12 races, which is good but could be better.

"That's where we need to hit it with these guys because I think in the race we can generally hold our own."

Hamilton goes into the summer break with a second place and two victories from the past three races, and has built a 24-point lead over Vettel.

That is despite being taken out on the first lap in Britain, starting in the midfield in Germany because of a qualifying problem and the race last weekend in Hungary taking place on a track that favours Ferrari.

Vettel, who won at Silverstone, could have entered the summer break on a three-race winning streak as he crashed out of the lead when rain fell at Hockenheim and could only fight back to second at Budapest after the wet qualifying.

Hamilton said he had feared defeat after Friday practice in Hungary but said "for some reason I guess I switch into a different mode on Sunday".

"It was definitely a bit of a surprise," said Hamilton, who had previously explained that a significant car change after Friday practice paved the way for his strong race pace.

"I'm really proud of all the team for keeping up the pace even though these guys turned up the heat the last few races.

"To come away with two wins is a testament to the strength in depth of our team."

What Hamilton and Vettel have done with their poles

Hamilton's better conversion rate from pole position shows exactly why he is keen for Mercedes to improve on Saturdays.

He has won three times from pole position this year, while Vettel has only done so twice.

Hamilton finished second in the two races he did not win, but Vettel has either taken victory from pole or failed to finish on the podium.

Why the fastest car won't be enough in F1's title fight