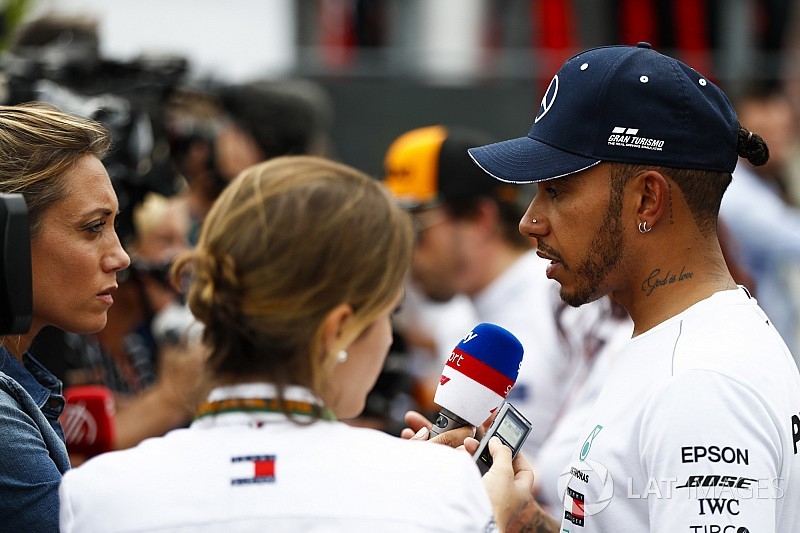 Lewis Hamilton says he was "100% open" with the FIA stewards when he was called in to explain his manoeuvre at the pit entry during the German GP – a meeting that ultimately resulted in a reprimand.

Hamilton was summoned for cutting across the grass from the pit entry and back onto the track when there was some confusion within the Mercedes team about whether he should pit or not.

The stewards – including driver representative Mika Salo - gave Hamilton a reprimand rather than a more stringent penalty because the incident happened under a safety car, and there was no danger to other drivers.

"It's been an emotional, the most emotional day, up and down," said Hamilton just after hearing the outcome.

"No one ever wants to go and see the stewards. They have the hardest job, because every scenario is always different.

"They ask you to explain what happened, and I was 100% open with them. I'm very rarely there.

"There have been many times in the past, I was there a lot, but I hardly ever see them now.

"I respect the rules and I respect the job that they have to do. I just was open, said this is how it was. They could hear and see how confusing it was, and that was that."

The stewards also noted that "the driver and the team candidly admitted the mistake and the fact that there was confusion within the team as to whether to stay out or to enter the pits and that led to the infringement".

Hamilton admitted that he didn't know what to do, especially as teammate Valtteri Bottas pitted just in front of him.

"It was just the most confusing second and a half. I honestly thought that was going to stay out, I was happy with my tyres, and then they said, 'Come in,' and I saw Valtteri ahead coming in. So I was like are they sure about it?

"By the time I got in it was no, stay out. It was literally go left, go right? I just slowed down and trundled over some grass and made sure I joined the track as safe as I could.

"I don't know if you heard the radio after, it was guys, the most confusing couple of seconds, because they were shouting in my ear. 'No left, no right!' I think it was still relatively exciting."