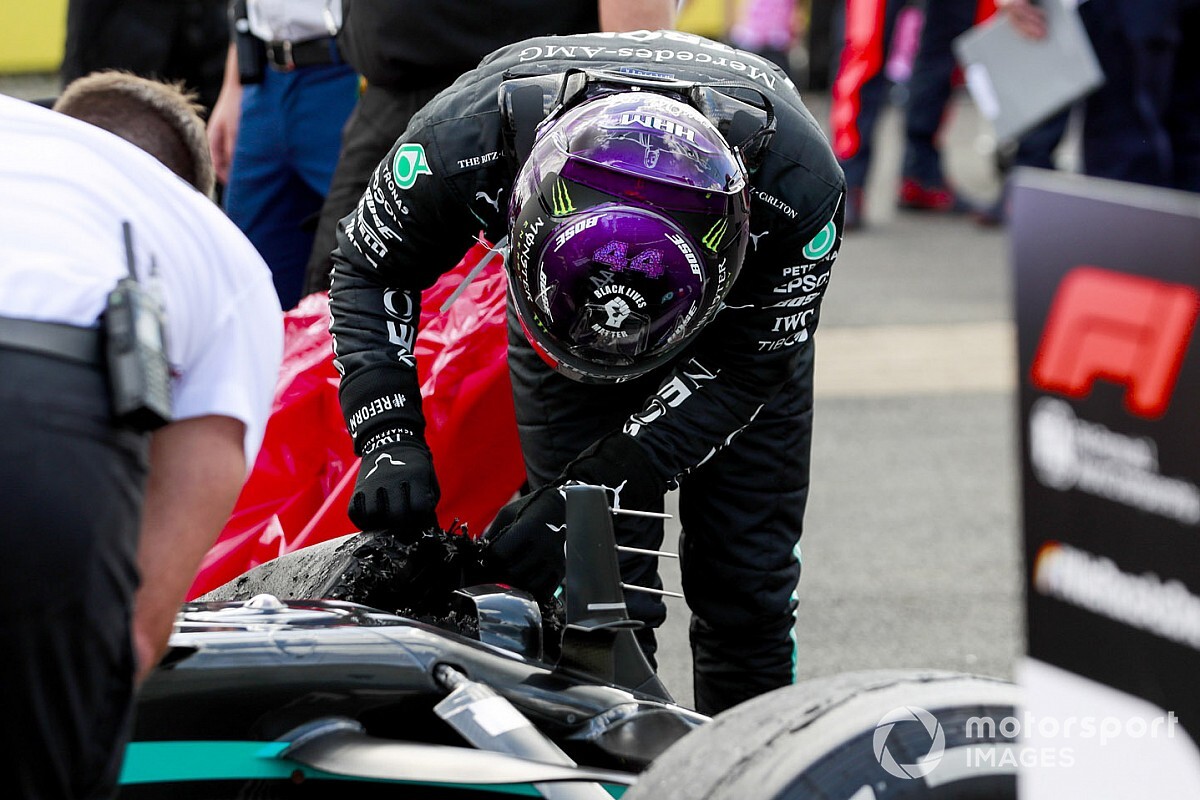 Lewis Hamilton says his "heart nearly stopped" after holding on for a remarkable British Grand Prix victory despite suffering a puncture on the final lap of the race.

Hamilton led every lap from pole position at Silverstone, keeping Mercedes teammate Valtteri Bottas at bay throughout the race.

Bottas suffered a front-left puncture with three laps to go, prompting Red Bull to pit Max Verstappen for a set of soft tyres in a bid to pick up the fastest lap bonus point.

It gave Hamilton a lead of over 32 seconds entering the final lap, which proved crucial when the Briton also suffered a front-left puncture exiting Luffield.

"Up until that last lap, everything was relatively smooth sailing," said Hamilton.

"The tyres felt great. Valtteri was really pushing incredibly hard, and I was doing some management of that tyre and he looked like he wasn't doing any.

"When I heard that his tyre went I was just looking at mine and everything seemed fine. The car was still turning. No problem. So I was thinking maybe it's OK.

"Those last few laps, I started to back off and then down the straight, it just deflated. I just noticed the shape just shift a little bit. That was definitely a heart-in-the-mouth kind of feeling, because I wasn't quite sure if it had gone down until I hit the brakes, and you could see the tyre was falling off the rim.

"Then just driving it, trying to keep the speed up, because sometimes it will fly off and break the wing and all these different things. Oh my God, I was just praying to try and get around and not be too slow.

"I nearly didn't get around the last two corners, but thank God we did. [I] really owe it to the team. I think ultimately maybe we should have stopped towards the end once we saw the delaminations."

Hamilton's race engineer Pete Bonnington kept him updated on the gap to Verstappen throughout the final lap, and was heard celebrating once his driver had crossed the line.

Hamilton replied: "Shit that was close" after clinching his seventh British Grand Prix victory, extending his record for the most wins at Silverstone.

Despite the late drama, Hamilton said that he remained really calm as Bonnington kept him updated on the gap behind, allowing him to focus on dragging the car home.

"You may or may not be surprised, but I was really chilled for some reason at the end," Hamilton said.

"Bono was giving me the the information of the gap. I think it was 30 seconds at one stage and it was coming down quite quickly, and in my mind I'm thinking 'OK, how far is it to the end of the lap?'

"But the car seemed to turn okay through Maggots and Becketts, thankfully. I got to [Turn] 15 and that's where it really was a bit of a struggle, and I could hear the gap coming down from 19 to 10.

"Oh my god. I've definitely never experienced anything like that on the last lap. And my heart definitely probably nearly stopped.

"I think that's probably how cool I was, because my heart nearly stopped."