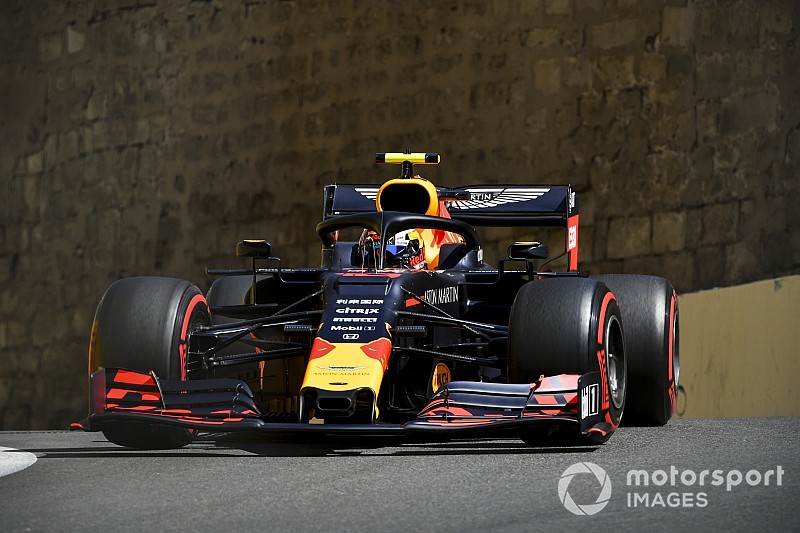 Red Bull and its Formula 1 engine supplier Honda have introduced a change to Pierre Gasly's power unit following the Frenchman's exclusion from Azerbaijan Grand Prix qualifying for a fuel-flow infringement.

Gasly's results were stricken from the qualifying classification in Baku after his RB15 was found to be in breach of the required fuel-flow limit of 100kg per hour.

The Frenchman was already set to begin the race from the pitlane following a Friday weighbridge offence and thus only contested the first segment of qualifying.

He was the fastest of the 20 drivers participating in the segment, having recorded a 1m41.335s that was aided by a tow from Lance Stroll's Racing Point car on the start-finish straight.

Gasly recorded a top speed of around 340km/h in the tow during Q1, and Red Bull has now explained that this led to an unexpected minor increase in fuel flow – which took the Frenchman's RB15 over the limit.

The Austrian outfit says the fuel-flow increase didn't have a significant impact on Gasly's laptime.

A change, which is understood to be electronics-related, has been introduced to Gasly's Red Bull to ensure there is no repeat offence in the race.

The tweak, made only to Gasly's car and not the three other Honda-supplied cars in F1, would've required a pitlane start, but this will make no difference to the Frenchman given his Friday infringement.

Russell had "horrific" week leading up to Baku