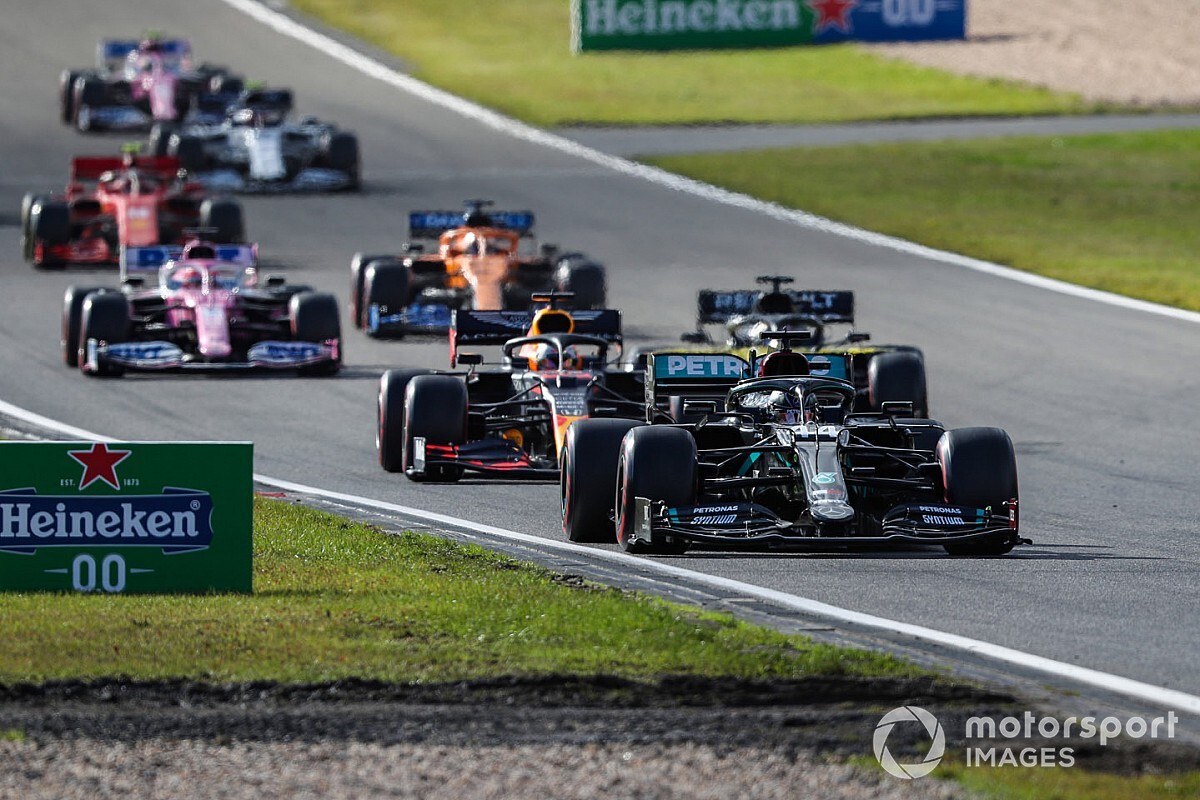 During the late safety car period at the Nurburgring race leader Hamilton and second placed Max Verstappen both complained about the speed of the safety car and expressed concerns about low tyre temperatures.

The restart with 11 laps to run was in effect Verstappen's last shot at getting past Hamilton, but the Mercedes driver had the advantage, and held onto his lead.

Horner says that DAS, which was designed to help the drivers put heat into the front tyres in such situations, made the difference.

"I think because the safety car waited so long for the field to catch up and was going so slowly, the tyre temperature was a big issue," he said.

"And I think that Mercedes with their DAS system are perhaps able to handle that perhaps better than we were.

"The restart was a little tricky, Max managed that well, and then it was fairly straightforward to the end of the race."

Despite losing a shot at a win Horner said that the Nurburgring saw another good performance from Verstappen and indicated that the gap to Mercedes has closed.

"Yeah, it was a very solid drive. He nicked fastest lap at the end of the race as well. He was gentle on the tyres at the beginning of the race.

"And really Max and Lewis, at one point, they were over 50 seconds ahead of [Daniel] Ricardo in P3, and were closing on lapping P4. So it's a very dominant display.

"But it feels like we have made progress this weekend, we have got a little closer, I think, to Mercedes here. And obviously great to get that second place again.

"I think particularly sector one we looked all weekend like we had the upper hand. Sector Three was our weakest sector in comparison, but I think generally it's been a strong weekend. I think we have made progress. So that's definitely encouraging.

"As I said, there were areas of the circuit here that we were equal to, or better than, the Mercedes."

Asked by Motorsport.com if Red Bull can challenge for wins on merit in the remaining races he said: "We've got Portimao, we've got Istanbul, we've got Imola, they're all circuits that will be quite interesting for us.

"And we're keen to finish the season with positive momentum, having sort of understood quite a few of the issues that we've had with RB16, so that's addressed going into RB16B.

"We've definitely made a bit of progress, which is encouraging. We're still pushing, we're still trying to get performance to the car.

"So there's still a lot of racing to do this year. And we're determined to try and finish the season on a high."

Hulkenberg was in wrong engine mode at start of Eifel GP

Ten things we learned from the Eifel GP