How will the 2014 Formula 1 season be remembered? 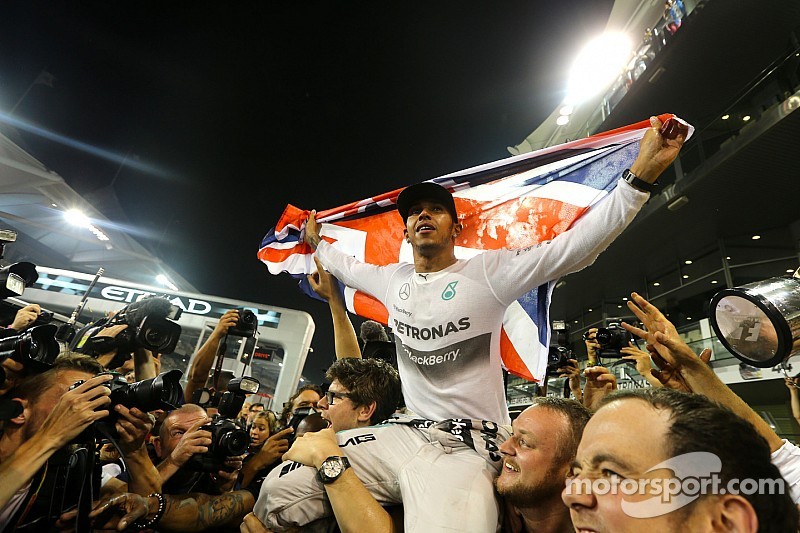 From a great rivalry and brand new regulations to the life threatening accident of Jules Bianchi and the financial demise of two teams...how will you look back on 2014?

From an intense title rivalry between two previously chummy team-mates that went down to the wire to the emergence of a new wave of stars; from the abject struggles of some of the sport’s biggest hitters to a near-constant stream of political intrigue, the first season of the sport’s new turbo era just about had it all.

Indeed, it’s tempting to say, with the events of last year still relatively fresh in our memories, that the 2014 Formula One season will be remembered in 10, 20 or even 50 years’ time as a classic.

After all, even critics of the new V6 turbo hybrid engine formula would be forced to concede that the quality of last year’s wheel-to-wheel racing was perhaps the best that F1 fans have been treated to in a generation. Arguably, there were fewer ‘dull’ races in 2014 than perhaps any other Grand Prix season in history, certainly in proportion to the number of races on the calendar.

Was is as good as it looks on paper?

But, when you examine the factors that lead to certain seasons becoming revered in the collective memories of F1 fans, it’s possible that 2014 will not be looked back upon quite as fondly as you might reasonably expect, even if stand-out races such as Bahrain, Canada and Hungary will be remembered for a long time to come.

When it comes to identifying vintage seasons, it’s the title battle rather than the individual races that makes them stand out – whether it’s the classic James Hunt-Niki Lauda clash of 1976, the bitter confrontations between Ayrton Senna and Alain Prost of 1989-90 or even the ‘modern classic’ that was the Lewis Hamilton/Felipe Massa duel of 2008.

Does a good rivalry make a great season?

You might therefore argue that the season-long contest between Hamilton and Nico Rosberg should automatically qualify 2014 for classic status, and certainly the rivalry between the Mercedes duo was one of the main ingredients that helped make last season one to savour. However, one area in which it falls short is the manner in which the championship fight was resolved.

An epic conclusion to the year undoubtedly helps to lift the seasons identified above over other close title races that are resolved in a more straightforward style, which is perhaps why seasons like 1984, 1998 and 2006, despite featuring year-long battles between two great drivers, aren’t held in quite the same esteem.

The rather limp finale in Abu Dhabi, spoiled by mechanical gremlins for Rosberg, means it’s unlikely 2014 will be remembered like ’76, ’89, ’90 or ’08, all of which (for different reasons) ended in truly memorable fashion. To that list can be added 1986, which boasts Nigel Mansell’s delaminating tyre as its defining image, and 1997, which ultimately boiled down to Michael Schumacher’s momentary lapse of judgement at Jerez in combat with Jacques Villeneuve.

Instead, it’s more probable that 2014 will be remembered for the sheer magnitude of Mercedes’ advantage over the rest of the pack. In that respect, the season that bears most comparison to last year is 1988, which also featured a great title fight between two first-rate drivers, fought out behind the wheel of the dominant car.

The rivalry between Senna and Prost had yet to turn truly acrimonious in ’88, the championship battle also lacking the kind of denouement that would come to define the two subsequent seasons – meaning that it’s the McLaren MP4/4’s incredible record of 15 wins in 16 races that stands out as the season’s distinguishing feature.

Notwithstanding the flashpoints at Monaco and Spa, the same can be said of 2014, in which the Mercedes W05 Hybrid eclipsed the record of the MP4/4 by one race (albeit with 19 races on the calendar) – all the more so because last year was the first year of a completely new set of technical regulations.

Much like 1988, 2014 also featured just three race-winning drivers – Hamilton, Rosberg and Daniel Ricciardo – falling well short of the variety seen in seasons such as 2003 and 2012, both of which can boast eight different Grand Prix winners. When it comes to statistical diversity however, it seems unlikely that the incredible record of 11 different winners set in 1982 will ever be matched.

But such figures are rendered largely meaningless when weighed against the losses of Gilles Villeneuve and Riccardo Paletti, as well as the career-ending accident of Didier Pironi, which tainted what would otherwise perhaps have been considered the best season of all-time.

It’s a similar story for 1994, which, despite featuring a gripping title struggle between Michael Schumacher and Damon Hill (with a suitably explosive finale) set against a backdrop of massive political controversy, will forever be associated with that black weekend at Imola, when Roland Ratzenberger and Ayrton Senna were both tragically killed.

While the events of Suzuka last October won’t have quite the same impact, Jules Bianchi’s accident will certainly leave something of a black mark against the year – as will Caterham and Marussia going into administration, with all the loss of livelihoods at their respective bases in Leafield and Banbury their disappearances entail.

Of course, how 2014 will be remembered will largely depend on what happens in the following years. If, for whatever reason, 2015 provides largely dreary racing, F1 fans all over the globe will be yearning for a re-run of Hamilton and Rosberg’s ‘duel in the desert’ at Bahrain; likewise, if the rivalry between the Mercedes pair becomes spicier still, the events of 2014 will no doubt quickly be forgotten, much like 1988 was in comparison to the more bitter tussles of ’89 and ’90.

Equally, should Bianchi go on to make a full recovery – and let’s all hope that is indeed the case – we may not look back upon Suzuka ’14 with quite such sorrow. Similarly, if the powers that be can prevent any more of the sport’s nine remaining teams from vanishing, it’s unlikely that the passing of Caterham and Marussia will be mourned as much as might be the case if, say, Sauber was to join them in going under.

It’s hard to predict exactly what will be remembered about 2014 and what will be forgotten, and judging what makes a particular season a ‘classic’ is of course a largely subjective exercise. But, the fact that the Hamilton-Rosberg battle lacked the key element of an exciting finale means Mercedes’ supremacy is probably what the year will be primarily remembered for.