The Brazilian Grand Prix and last round of the 2012 season got underway today with the first two free practice sessions. 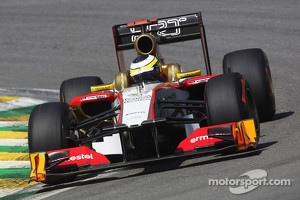 180 minutes around the historical track of Interlagos during which the HRT Formula 1 Team drivers, Narain Karthikeyan and Pedro de la Rosa, worked on their cars’ basic set up as well as testing the two options of tyres available for the Grand Prix (hard and medium) and a 2013 prototype for Pirelli.

The team will continue working to improve the F112’s balance and therefore the overall grip ahead of tomorrow’s final free practice and ultimate qualifying sessions.

Pedro de la Rosa: "This is an amazing circuit and really fun to drive. We found a good set up base from the beginning but it would have been better to do many more laps and long run simulations to fine-tune it in order to get a better use of the tyres.

We have a lot of work to do mainly on the rear end because traction is still pretty poor.

Today’s times may not be quite representative, as we haven’t worked on full loaded configuration but, on a positive note, the car worked very well on the medium tyres and I am confident that we can improve on the hard compound for tomorrow”.

Narain Karthikeyan: "The circuit is exactly how I remembered it. It is very nice and flowing and there are a lot of nice corners, which makes it quite enjoyable to drive around.

It was a difficult day because we couldn’t do many laps and we didn’t get the most out of the option tyres as I got a lot of traffic on my flying laps at the end of the session.

I have to say that the car balance has been pretty good from the start and we managed to improve it slightly throughout the sessions. We certainly have room for improvement, though.

Rear tyre degradation is still too high and we must improve traction so that’s where we are going to mainly focus for tomorrow”.

Luis Pérez-Sala, Team Principal: "It has been a first positive day overall; much better than in Austin. Here we don’t have any issues with getting the tyres up to temperature.

On the contrary, temperatures have been very high and I think everyone struggled with tyre degradation. We need to take a step forward to improve this as well as traction, especially on the hard compound.

This track seems to suit our car better and hopefully we can do a good qualifying tomorrow. Once again, I want to thank the whole team for the job they are doing here in Brazil despite the circumstances”.

Quite a tough Friday practice for Toro Rosso at Interlagos