HRT has not ruled out utilising every single day between now and the 2011 season opener to appoint Narain Karthikeyan's teammate.

Vitantonio Liuzzi and others have been linked with the last remaining cockpit on this year's grid, but the Spanish team is evidently in no rush to make a decision. 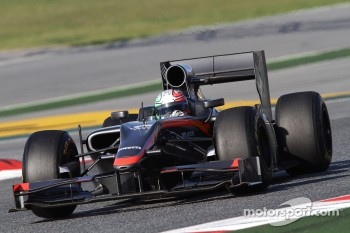 "We will announce in the next few weeks our lineup for 2011," a team spokeswoman told the Italian website 422race.com.

Friday marks precisely three weeks until opening practice for the Australian Grand Prix, which is one day after the FIA deadline for naming the driver.

Another candidate for the seat is Giorgio Mondini, who - like Liuzzi - was faster than Karthikeyan at the recent Barcelona test.

Twelve teams is too many. I'd like to see ten, that's enough

The HRT spokeswoman played down the significance of Indian Karthikeyan's performance.

"We are not worried about the results of the test. Everybody knows that the laptimes during a test is not the most important thing, because the teams use the test in order to prove and make changes in the car," she insisted.

F1 chief executive Bernie Ecclestone on Thursday hinted he would not be sad to see HRT or another straggler fall out of the sport.

"Twelve teams is too many," he told BBC radio. "I'd like to see ten, that's enough."