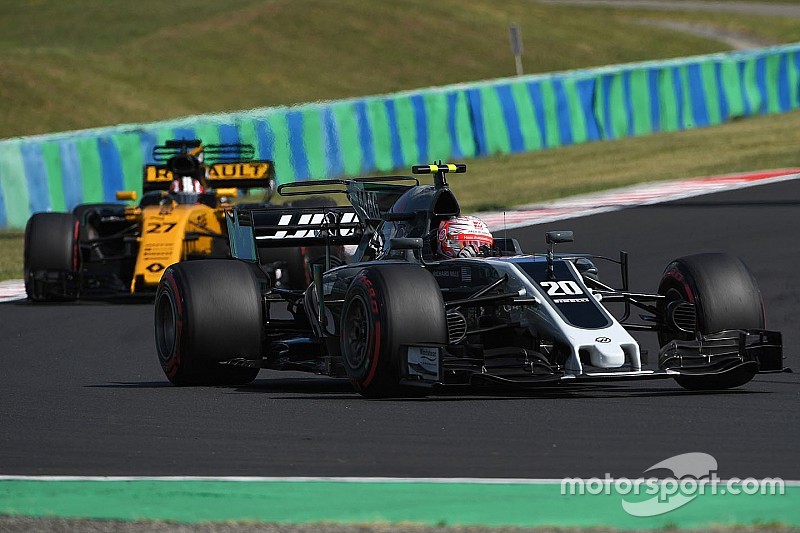 Nico Hulkenberg insists he took no insult from Kevin Magnussen’s ‘suck my balls’ comment, as he branded the Dane a ‘wannabe Verstappen’.

The Renault driver clashed with his Haas rival in front of the television cameras after the Hungarian Grand Prix, after the pair came to blows on track during their fight for position when Hulkenberg was run off the circuit.

Hulkenberg confronted Magnussen live on camera to accuse him of being the most unsporting driver on the grid, before the Dane told him: “Suck my balls, honey.”

Writing in his exclusive column for German station Sport1 on Tuesday, however, Hulkenberg said he was surprised there had been such a frenzy over the incident – but he said he took no offence.

"I wish there were as many people talking about the race,” he said. “At the moment we have different challenges in Formula 1 than the balls of a wannabe Verstappen.

“I'm not the kind of guy to curry favour with the public after the race, and I don't need to insult someone. If I have a problem with somebody, I go ahead and say what's on my mind.

“But the fans are happy about seeing a sport in which competition is being lived and somebody is speaking his mind. This is the fun thing about F1, especially with hot-headed sensitive people.

“With Kevin it's like having a little brother. You know he is not able to defend himself in any other way. Therefore, it's easy to take his remarks with a smile on your face."

Coincidentally, Hulkenberg bumped into Steiner at Budapest airport on Monday morning and the pair cheekily posed for a photo that was posted on Instagram to make light of the ‘suck my balls’ remark.