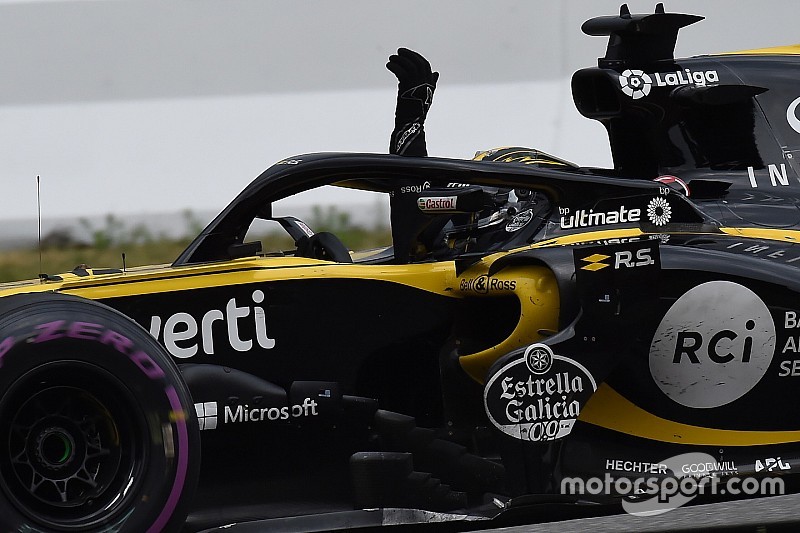 Hulkenberg finished best of the rest behind the three big teams despite suffering tyre blistering early in the race.

He also switched to intermediates when the rain came, before making a quick switch back to slicks under the safety car.

Crucially for Renault’s aspirations in the constructors' championship, Hulkenberg beat both Haas drivers Kevin Magnussen and Romain Grosjean, who had qualified ahead of him.

“It was good, it’s one of those races where Nico is really amazing,” Abiteboul told Motorsport.com after the race.

“Lots of things happening, but he just managed to focus on what he had to do, provide the right instructions to the team, nothing less, nothing more.

“A remarkable race. I would liked that he would be able to make one or two more steps towards the podium, but it’s not happened today.

"But clearly in front of his fans, in front of an amazing crowd, he was highly motivated.”

In contrast, it was a frustrating race for Hulkenberg's teammate Carlos Sainz who started eighth and finished 10th on the road, but then dropped out of the points to 12th after picking up a penalty for passing Marcus Ericsson under the safety car.

The Spaniard did not have the benefit of using the team's new front wing, as only one was available on race day and given to Hulkenberg.

“It’s a bit frustrating, because it looked like he could be with Nico,” said Abiteboul of Sainz. “Obviously he was a little bit on the back foot after the start, but he could have had a pretty similar race.

“There are two frustrations, I think the stop didn’t really work in his favours, but also the incident with Ericsson where he had to take a 10-second penalty for overtaking him. Ericsson was slow, we thought that he had a problem with the car.

“I believe that an instruction was given to give back the position to Ericsson, but there have been so many communications, but before putting the blame on anyone, we need to replay exactly what has happened.”