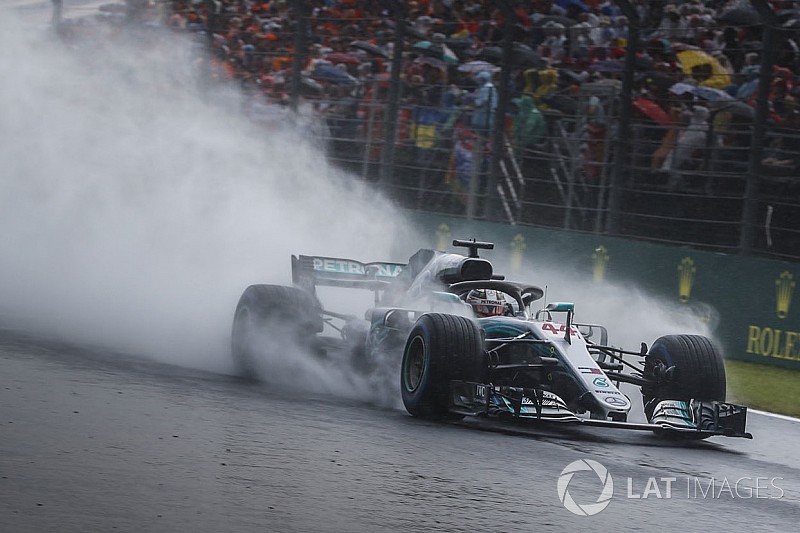 The Q3 runners used wet tyres throughout, and on the first runs Ferrari driver Kimi Raikkonen had the advantage over Hamilton.

But after both Mercedes drivers pitted for a second set of wets with three-and-a-half minutes remaining, it turned into a battle between Hamilton and teammate Valtteri Bottas.

Bottas had the advantage after the first two sectors, but Hamilton was a stunning 0.426s faster in the final sector to take pole by 0.260s.

Raikkonen reclaimed third place from teammate Vettel late on by just 0.024s to make it an all-Ferrari second row.

Renault driver Carlos Sainz was the only driver not to use two sets of wets in Q3 and took fifth place ahead of the Toro Rosso of Pierre Gasly.

Red Bull had a poor session, with Daniel Ricciardo not even reaching Q3 and Max Verstappen down in seventh place and 2.374s off pole.

Brendon Hartley was a career-best eighth, ahead of Haas pairing Kevin Magnussen and Romain Grosjean.

Q2 started with drivers heading out on slicks but following light rainfall – with Vettel on intermediates the only exception.

With the rain returning and intensifying, Vettel set a lap 2.1s faster than everyone while the rest of the field dived back into the pits for intermediates.

Those who were able to get back in and change the quickest benefitted in terms of track conditions as the circuit gradually got wetter.

Fernando Alonso, who was not one of the last to head out, ended up 11th and was unable to improve after taking on wets later in the session.

But that put him ahead Ricciardo, one of the later drivers to set his initial time on intermediates ended up in 12th place having marginally improved after bolting on wets.

Ricciardo was delayed by yellow flags for Lance Stroll's off at Turn 9, although also lost time in other parts of the lap compared to Raikkonen, who set a time over four seconds faster while running around 11s behind.

While the conditions were poor for his intermediate run, Ricciardo was running around 11s clear of Raikkonen on track at the same time as the Ferrari driver set a time just over four seconds faster.

Nico Hulkenberg, also among the later runners, was 13th ahead of Sauber's Marcus Ericsson.

Williams driver Lance Stroll made it to Q2, but spun coming out of Turn 9 and nosed into the barrier, bringing his session to an end.

McLaren driver Stoffel Vandoorne was the quickest of those eliminated in a frenetic wet/dry Q1 session after being shuffled back by a flurry of late improvements.

Drivers initially ran on intermediate Pirellis after a downpour before the start, but even early in the session drivers were looking to look to slicks.

Vandoorne was out of the drop zone late on but he was among the first to complete his final lap on a track that was getting quicker.

Ricciardo, Ericsson, Hartley and Stroll were among the drivers to make late improvements and push Vandoorne into the bottom five.

Charles Leclerc was 17th for Sauber, 0.035s slower than Vandoorne but comfortably clear of the lead Force India of Esteban Ocon.

Ocon did his best lap on his final time round, but it was half-a-second away from being enough for a Q2 place as he was struggling with a lack of rear brakes.

Teammate Sergio Perez was 19th, a tenth clear of Williams driver Sergio Sirotkin, who complained about being delayed by a Ferrari in the final two corners on his quick lap.

No "animosity" towards Perez - Force India