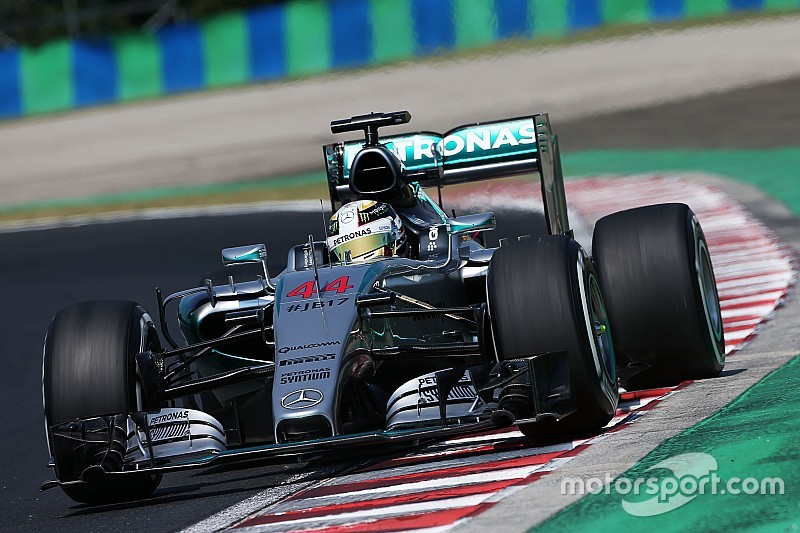 Lewis Hamilton stayed on top in second practice for the Hungarian GP, but Red Bull's Daniil Kvyat and Daniel Ricciardo both outpaced his teammate Nico Rosberg.

Ricciardo ended his session in a cloud of smoke, however, when his Renault engine blew up – taking the shine off Red Bull's strong performance.

Best of the rest was Ferrari's Kimi Raikkonen, who was over a second off the pace.

Story of the session

Hamilton was the first to set a representative time of 1m26.132s on the medium-compound tyres, as all drivers complained about a lack of grip as the temperatures in Hungary soared. Kvyat was soon not far behind on 1m26.330s – which was quicker than Rosberg at this point.

Rosberg had been balked by a Lotus, much to his consternation, as he attempted to open a flying lap. Hamilton suffered a big lock-up at Turn 1 and complained his tyres were "cooking out here".

Rosberg moved up to second, within 0.036s of Hamilton, who then lowered the fastest time to 1m25.613s. Ricciardo went second fastest, 0.4s down on Hamilton.

Raikkonen was the first frontrunner to try the soft tyre, jumping to the top of the times on 1m25.134s.

Hamilton had a wild moment at Turn 4 on his first flying lap on the softs, briefly allowing Rosberg the top spot on 1m24.668s, before unleashing his 1m23.949s which stood as the best time of the session.

Kvyat went second fastest, with his 1m24.300s lap 0.351s down on Hamilton's. Ricciardo set the third-quickest laptime, his 1m24.451s demoting Rosberg to fourth.

"If that was qualifying, we'd gladly take it," said team chief Christian Horner from the pitwall.

But the shine was removed from Red Bull's day when Ricciardo's car pulled off with smoke billowing from the engine. But the failure will not result in a penalty.

"Unfortunately it spat out a lot of oil and almost took our other car out," added Horner. "That's engine number four; the crankcase pressure went up. Engine five, which he first used in Austria will go in tomorrow."

Best of the rest

Raikkonen was the fastest of the Ferraris in fifth, but 1.1s off the pace. His teammate Sebastian Vettel, who lost track time with an engine problem this morning, spun at Turn 12 in FP2 while distracted by a Toro Rosso and rejoined right in front of Alonso, who was on an out-lap.

Vettel suffered a second spin under braking at Turn 1 on his long run.

Carlos Sainz was sixth for Toro Rosso, but teammate Max Verstappen was down in 16th after complaining of a "strange sound" from his Renault engine – and an electrical problem cost him much of the session. He rose to 11th in the final few minutes.

Fernando Alonso was an impressive eighth for McLaren, despite complaining of brake issues, with Jenson Button 12th as the Williams duo of Valtteri Bottas (new front wing) and Felipe Massa (old wing) were ninth and 10th respectively.

Romain Grosjean – down in 15th – suffered a lazy spin at the penultimate hairpin in his Lotus, while Manor's Roberto Merhi produced the save of the day from a huge tankslapper at Turn 4. He outpaced teammate Will Stevens by 0.002s.

Lotus and Sauber battled out positions 13-16 in the order: Pastor Maldonado, Felipe Nasr, Grosjean and a brake-by-wire-troubled Marcus Ericsson.

Only 18 cars ran during the session following Sergio Perez's big crash in free practice one, and Force India elected not to run Nico Hulkenberg's machine until it understood exactly what caused Perez's right-rear suspension failure.

Force India to sit out second practice after Perez shunt