The final Formula One Grand Prix before the traditional Summer break will take place on the always challenging Hungaroring.

Round 10 of the 2013 FIA Formula One World Championship – the final race before the sport’s traditional summer break – sees the teams preparing to do battle around the tight and twisting Hungaroring, home of the Hungarian Grand Prix.

The race has been an ever-present on the calendar since 1986 and ranks third on the list of circuits to host the most consecutive F1 World Championship races, beaten only by Monaco (59) and Monza (32).

With 14 corners and just one real straight,the Hungaroring presents teams with a similarproblem to that encountered in Monaco – how to maximise high downforce performance. Optimum aerodynamic grip will be the provenance of the teams but mechanical grip will largely come from a new range of Pirelli tyres. The manufacturer has altered its tyres for the rest of the season and will this weekend debut new tyres based on 2012 constructions and 2013 compounds. Here, teams will have a choice of Soft and Medium compounds. 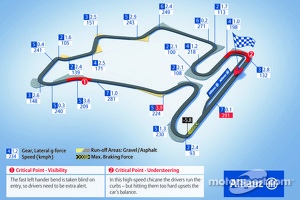 In the Drivers’ Championship, current leader Sebastian Vettel will have a chance to edge closer to a full set of current GP wins. A first home win at the Nürburgring three weeks ago leaves the German with just two winners’ trophies to claim (here and the US) but victory at the Hungaroring has proved elusive, with second in 2011 his best result.

The form driver here is Mercedes’ Lewis Hamilton, who with three wins (2007, ’09, ’12), is just one shy of matching Michael Schumacher’s Hungaroring win record.

► The Hungaroring has featured on the F1 calendar since 1986. This will be the 28th edition of the race.
► Michael Schumacher has won the race more times than any other driver, with four victories to his credit. Ayrton Senna is next on the list with three wins, a total matched by current Mercedes driver Lewis Hamilton.
► McLaren are the most successful team here with 11 victories. They are followed by Williams with seven wins and Ferrari with five.
► The Hungaroring was the scene of Fernando Alonso’s first grand prix win, in 2003. At the time, it made the Spaniard F1’s youngest winner, at 22 years and 26 days. Sebastian Vettel beat his record five years later. The German was just 21 years and 73 days old when he won the 2008 Italian GP for Toro Rosso.
► Robert Kubica also made his Formula One debut at the Hungaroring, in 2006, racing for BMW-Sauber. He finished seventh and claimed two points, but was later disqualified when his car was found to be 2kg underweight. The Polish driver did not have too long to wait to register points, however. Two months later he took third place in Monza, the first of 12 podium finishes to date (including one victory, in Canada in 2008).
► Jenson Button’s march to his first win from 14th on grid at the rain-hit 2006 race represents the biggest climb from starting position to top step of the podium. Button is followed in that regard by Nigel Mansell, who scored victory from 12th on the grid in 1989. The two Britons are the only drivers in the history of the race to win from beyond the first two rows of the grid.
► Damon Hill also scored his maiden win in Hungary, racing for Williams in 1993. He was the first son of a world champion to win a grand prix. He went on to take 21 further wins and the 1996 title. The 1993 race also saw Riccardo Patrese score the final podium finish of his 257-race career.
► Lewis Hamilton’s 2009 win for McLaren was the first F1 victory for a car equipped with a Kinetic Energy Recovery System (KERS).
► The F1 Drivers’ Championship has twice been won at the Hungaroring. Mansell, driving for Williams, won the 1992 championship at the Hungarian GP, the 11th race of a 16-race season, while Michael Schumacher won his fourth world title here in 2001 at the 13th race of a 17-race season.
► Zsolt Baumgartner became the first Hungarian to race in Formula One when he took part in his home race for Jordan in the 2003. Baumgartner replaced Jordan regular Ralph Firman, who had crashed heavily in practice. Baumgartner qualified 19th and his race lasted 34 laps before an engine failure ended his debut. He raced again for Jordan three weeks later in Italy and then completed a full season for Minardi in 2004.
► Despite the Hungaroring being a tough track on which to overtake, pole position isn’t crucial. Since 2005, the man starting at the front has won just twice – Hamilton, in ’07 and ’12.