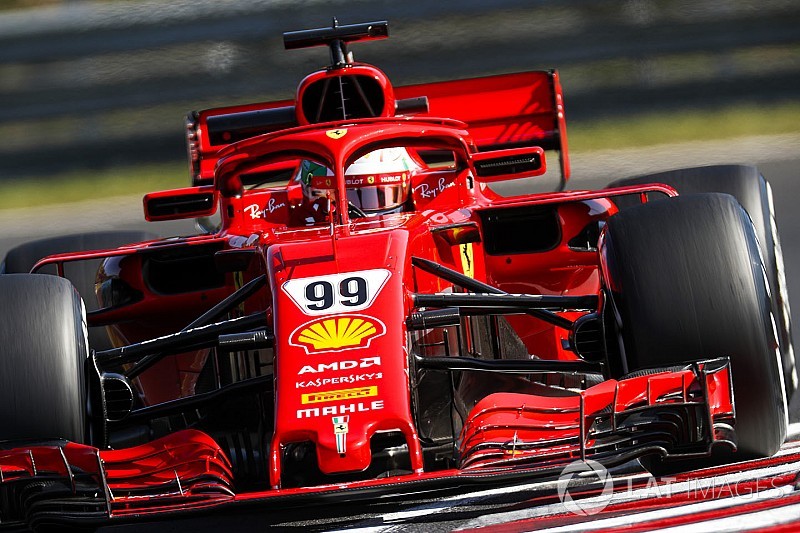 The Italian driver, who appeared for Sauber in first practice at the Hungaroring last Friday, clocked a 1m19.648s on soft tyres in the third hour of running.

That was more than three seconds slower than the fastest time through the race weekend, a 1m16.170s set by Ferrari’s Sebastian Vettel in FP3, as Tuesday’s drivers went about their test programmes.

Giovinazzi usurped McLaren’s Lando Norris at the top of the times and the Formula 2 title contender finished the morning second.

Force India driver Nicholas Latifi completed the top three and was the last man to squeeze below the 1m20s mark, eventually posting a 1m19.994s after a series of improvements over the morning on softs.

At the start of the day Latifi was one of three drivers to trial an experimental front wing built to F1’s 2019 regulations.

He completed a multi-lap run with the front wing, while Red Bull’s Daniel Ricciardo and Williams tester Oliver Rowland stuck to out-laps with their respective teams’ designs.

The soft tyre was the preferred option for most drivers, with Marcus Ericsson fourth for Sauber on a 1m20.081s and Brendon Hartley fifth less than a tenth slower.

F2 championship leader George Russell had a quiet start with Mercedes before ending up sixth-fastest.

He did not post a representative time in the first two hours and his lap count remained low, before he emerged and climbed to sixth on a 1m20.231s, albeit with only 21 laps completed – half the next-worst tally.

Ricciardo was next up for Red Bull on a 1m20.304s set on softs, ahead of Renault’s Nico Hulkenberg (softs), Rowland (mediums) and Pirelli tyre tester Sean Gelael in the second Toro Rosso.

Why Key could face an impossible task at McLaren