Join us as we delve into the latest technical developments from the second round of the 2021 Formula 1 World Championship at Imola, courtesy of Giorgio Piola and Sutton Images.

Damage of the car of Charles Leclerc, Ferrari SF21 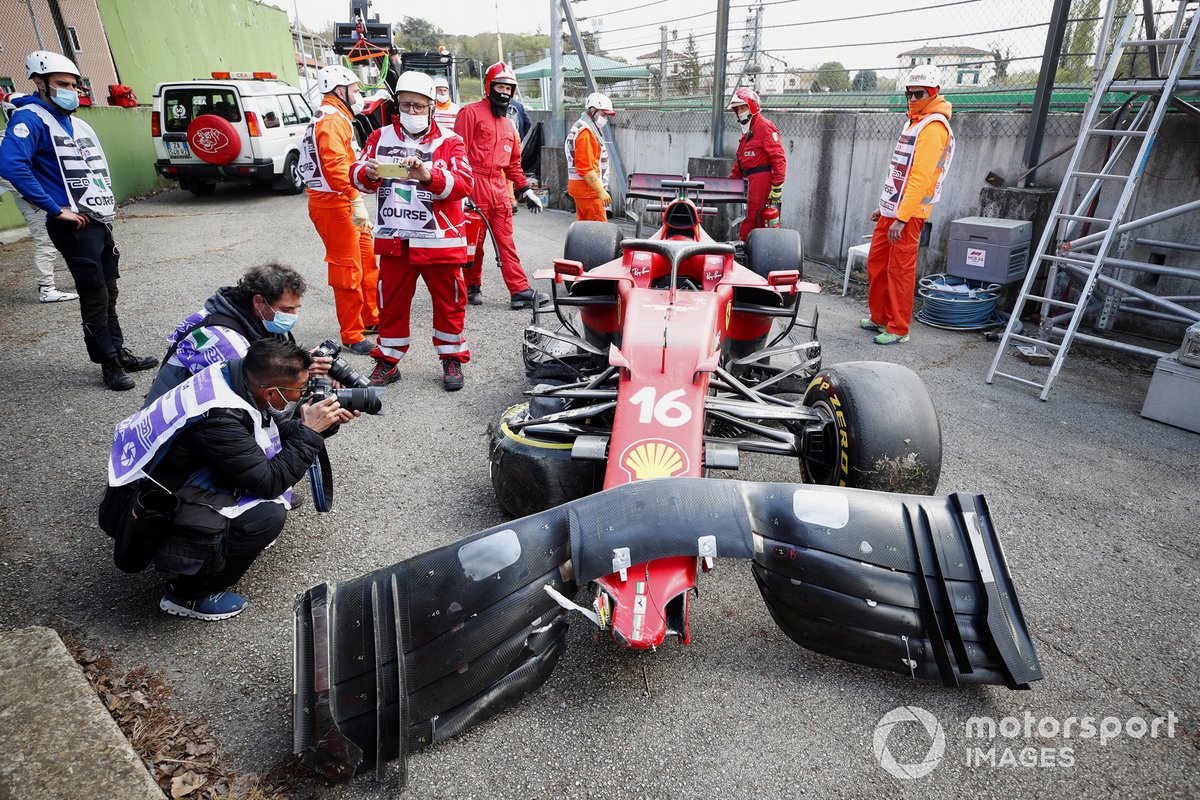 1/18
Charles Leclerc’s crash damage allowed us to get a great view of the underside of the Ferrari SF21’s front wing.

The car of Charles Leclerc, Ferrari SF21, is loaded onto a truck 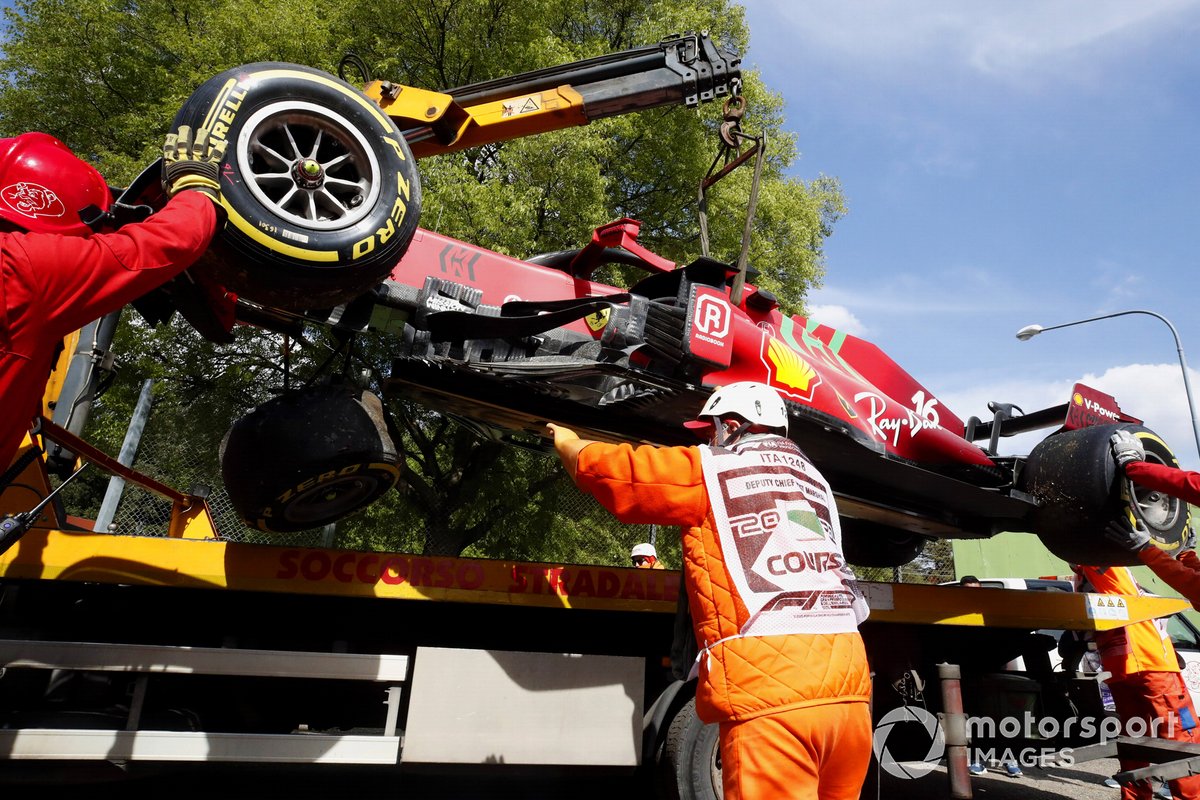 2/18
Detail of the SF21’s underside was also revealed as the car was hoisted onto the recovery truck. 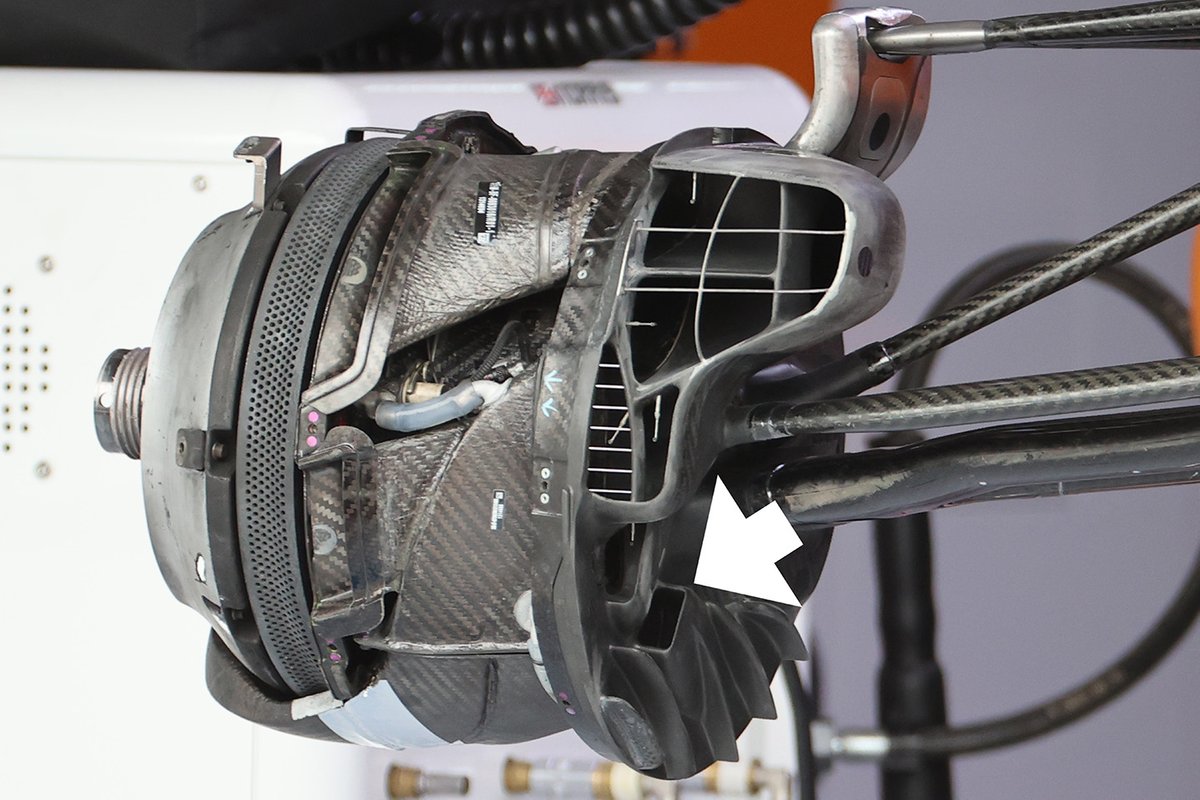 3/18
McLaren’s front brake duct assembly has two new inlets amongst an array of fins this season that help feed airflow through the assembly for aerodynamic gain. It’s a similar arrangement to the one used by Mercedes last season but McLaren has now inverted its brake duct shape for a similar effect. 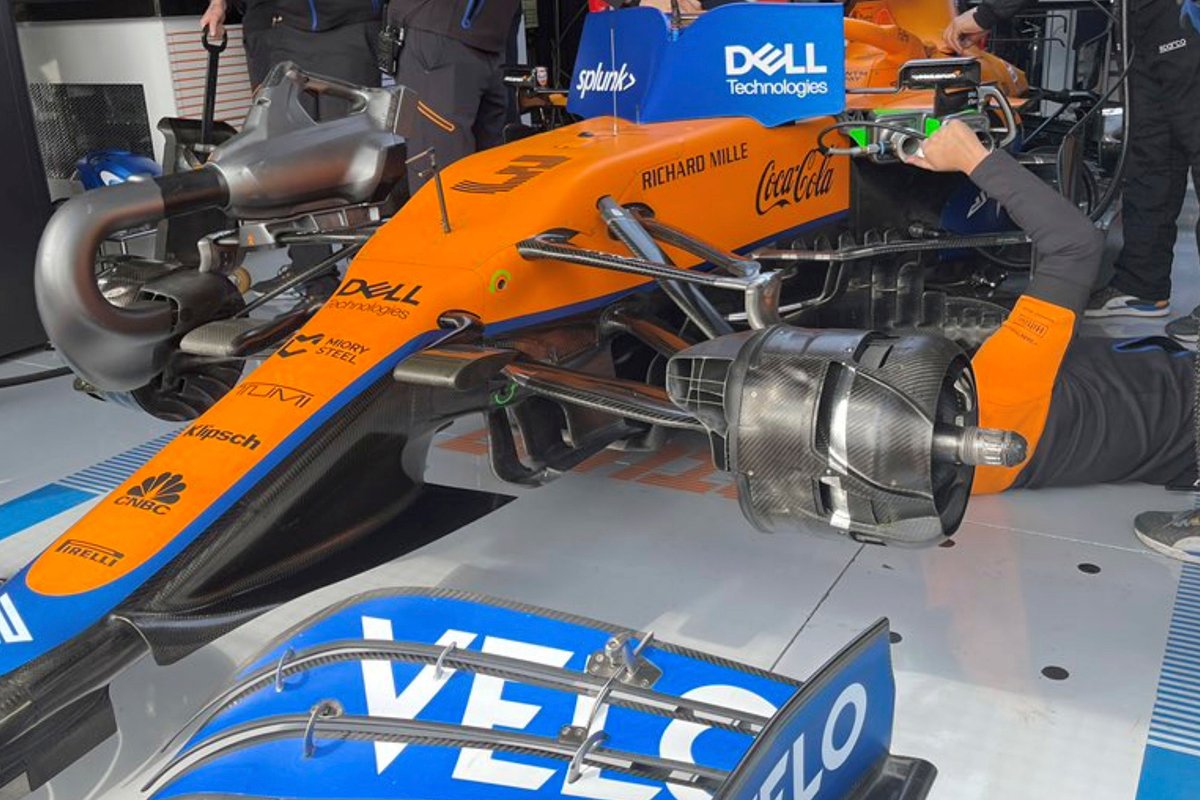 4/18
A shot of the MCL35M’s ‘cake tin’ shows how the team have placed various channels and outlets within its design to help magnify the aerodynamic effect it can have. 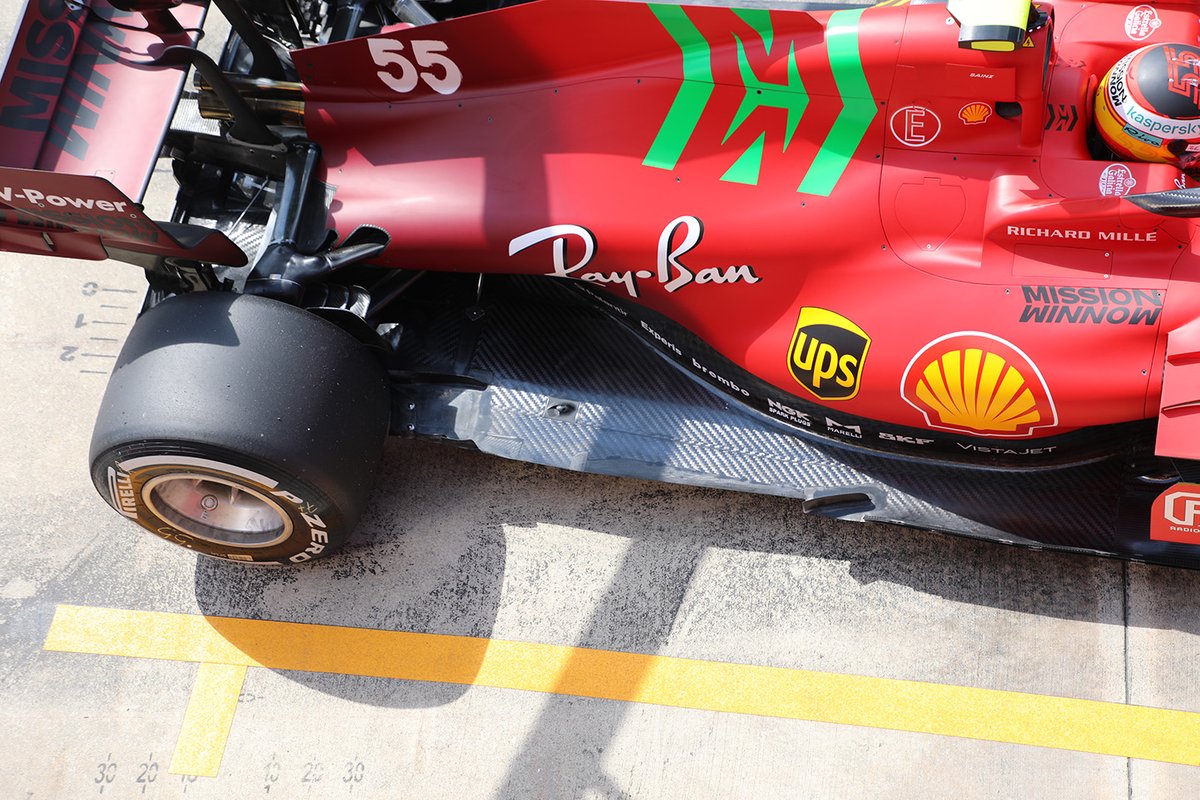 5/18
Ferrari trialled a new floor during Free Practice that featured the Z-Shaped cutout that some rivals have been using throughout the opening phase of the season. The cutout is paired with a new strake, while the trio of fins midway down the floor have been removed. 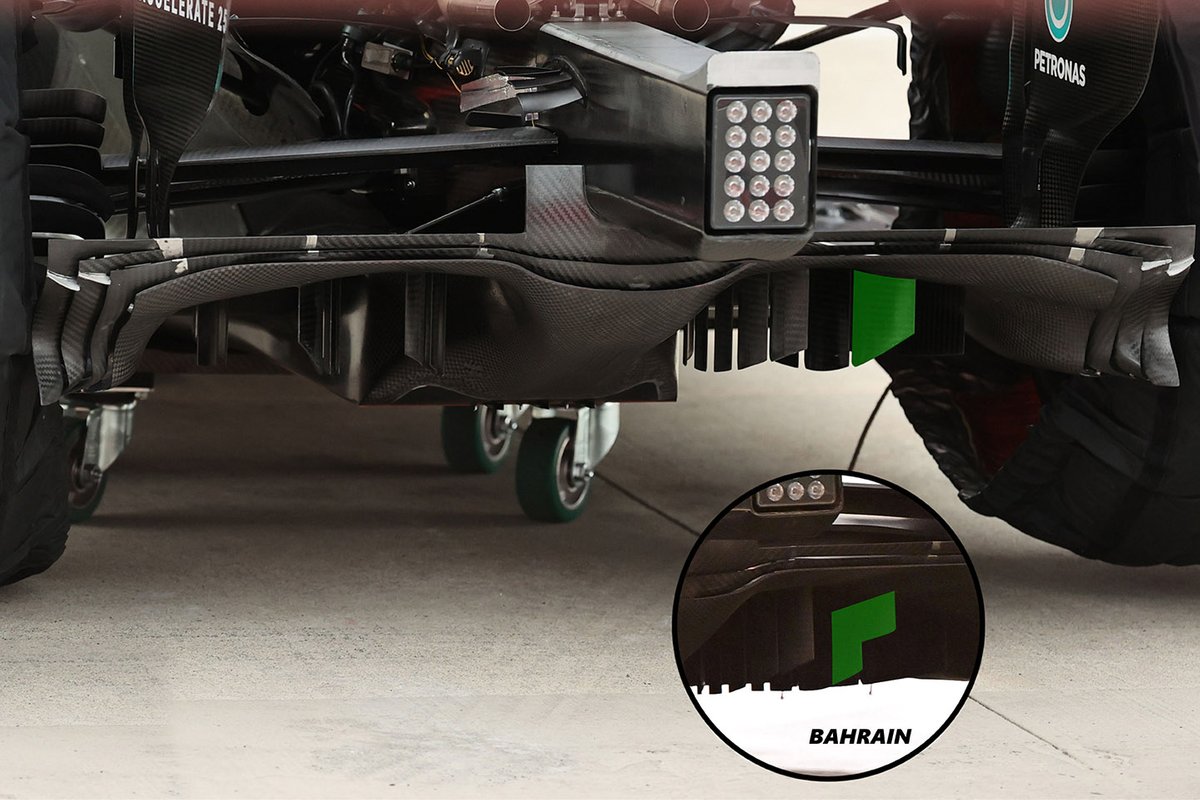 6/18
Mercedes made a modification to the diffuser for the second race of the season, altering the shape of one of the vertical stakes (highlighted in green). As you can see L-Shaped strake has been replaced by a full-length version.

7/18
A great shot of the Red Bull RB16’s diffuser as it is hoisted onto the recovery truck following the driveshaft failure that befell Max Verstappen. 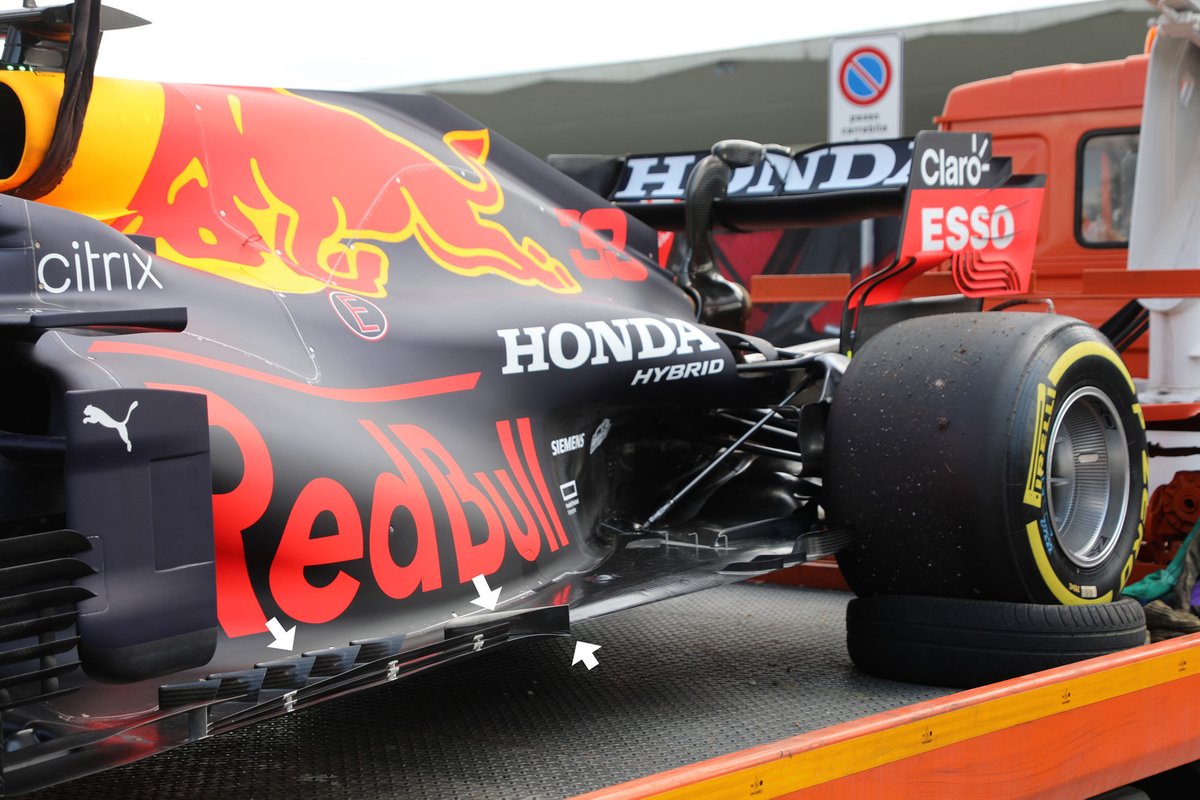 8/18
Highlighting the cluster of fins used by Red Bull on the RB16B to coerce the airflow outboard. 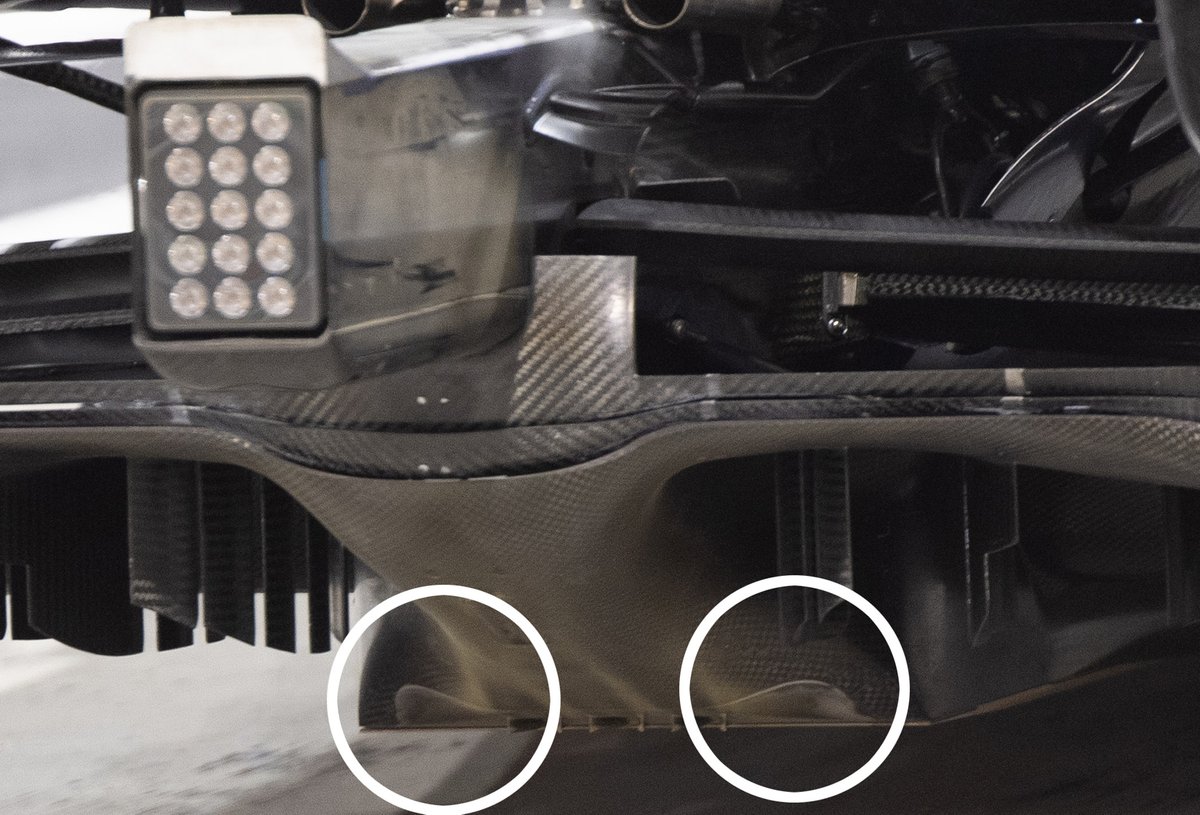 9/18
This is not new but an interesting detail is the surface treatment in the transition zone on the Mercedes W12’s diffuser. 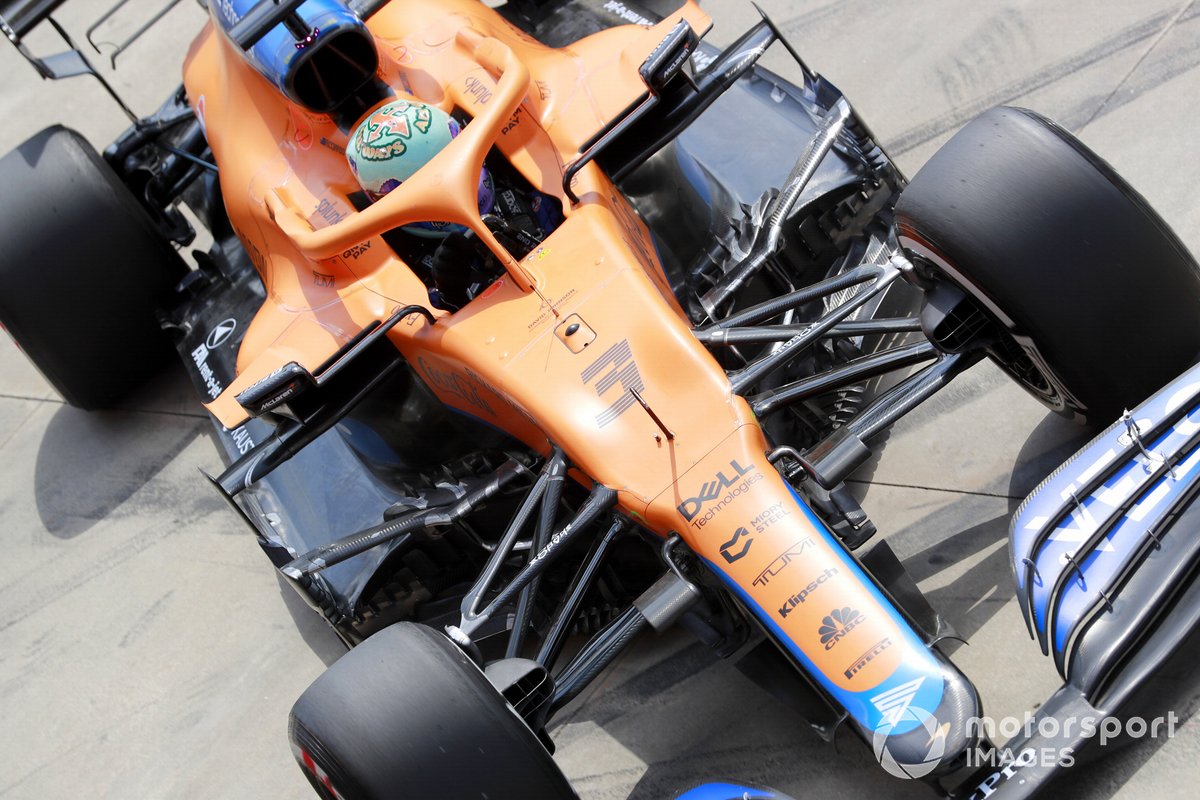 10/18
A good overview of the McLaren MCL35M and the various surfaces that go to make up the bargeboard cluster. 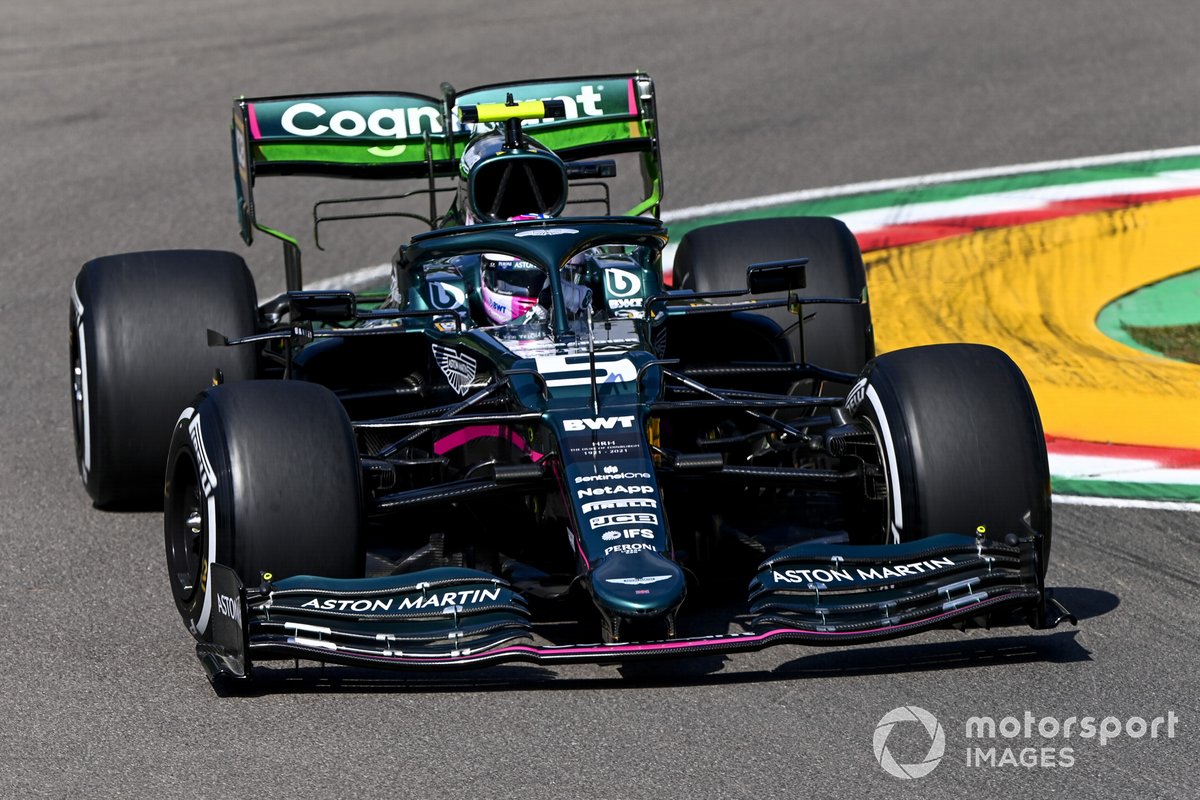 11/18
Flo-viz painted on the spoon-shaped rear wing of the Aston Martin AMR21 as the team checked to make sure the new design is providing the performance expected of it. 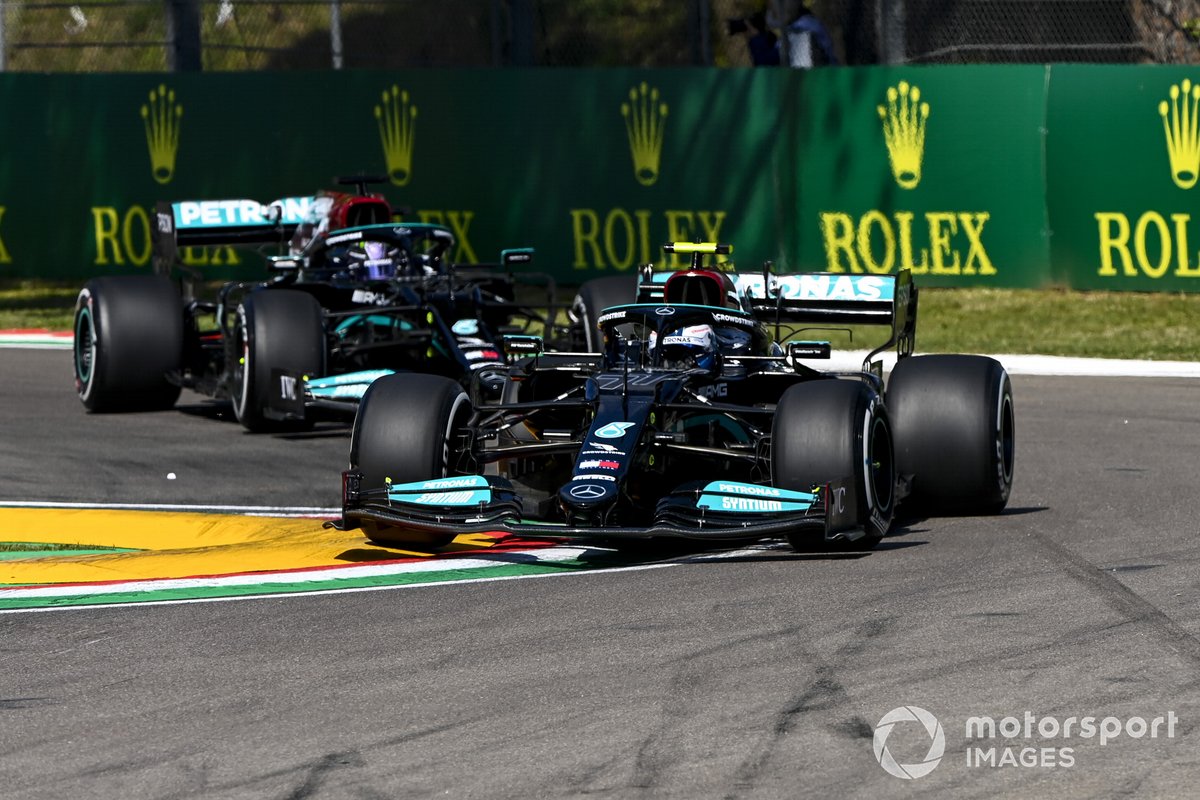 12/18
Mercedes testing out different rear wing configurations, as Bottas has the twin pillar arrangement while Hamilton has the single pillar. 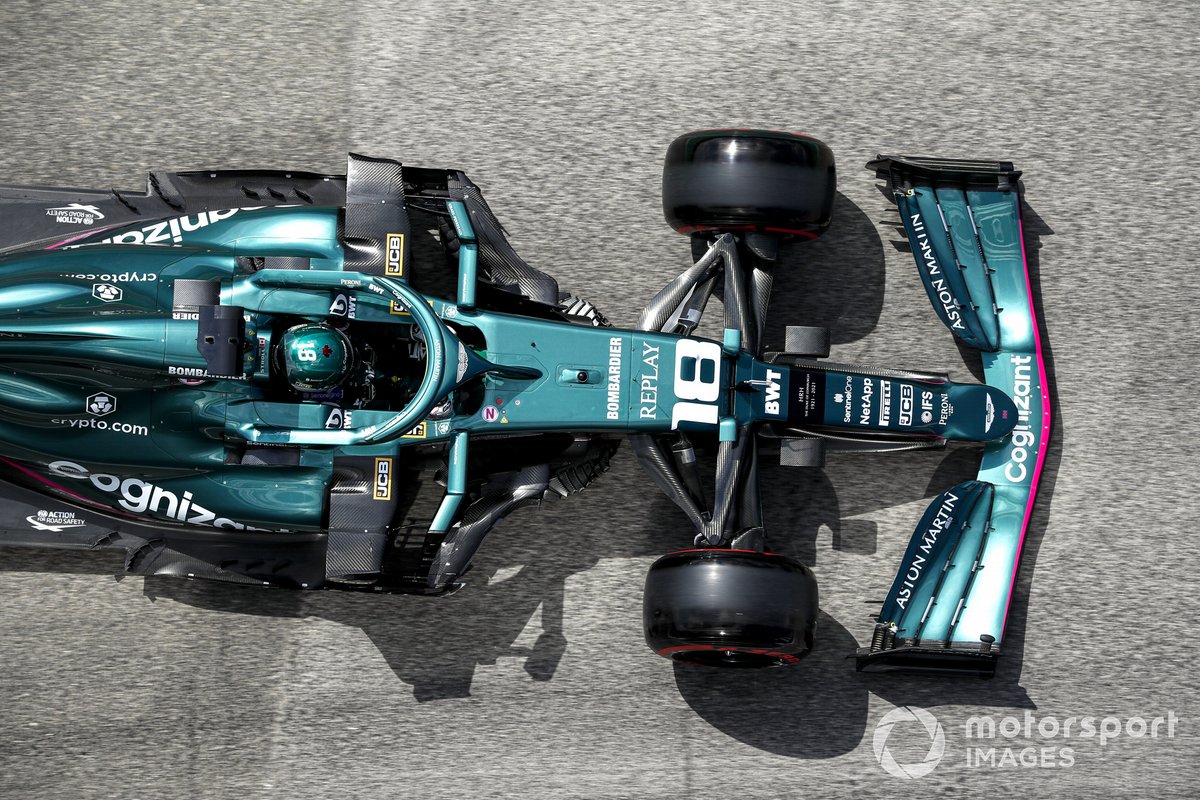 13/18
The aerial view of the Aston Martin AMR21 shows just how much of the floor the team has cut away in order to alter the angle of the floor. You’ll also note the floor is contoured to further invoke the aerodynamic effect it’s looking for. 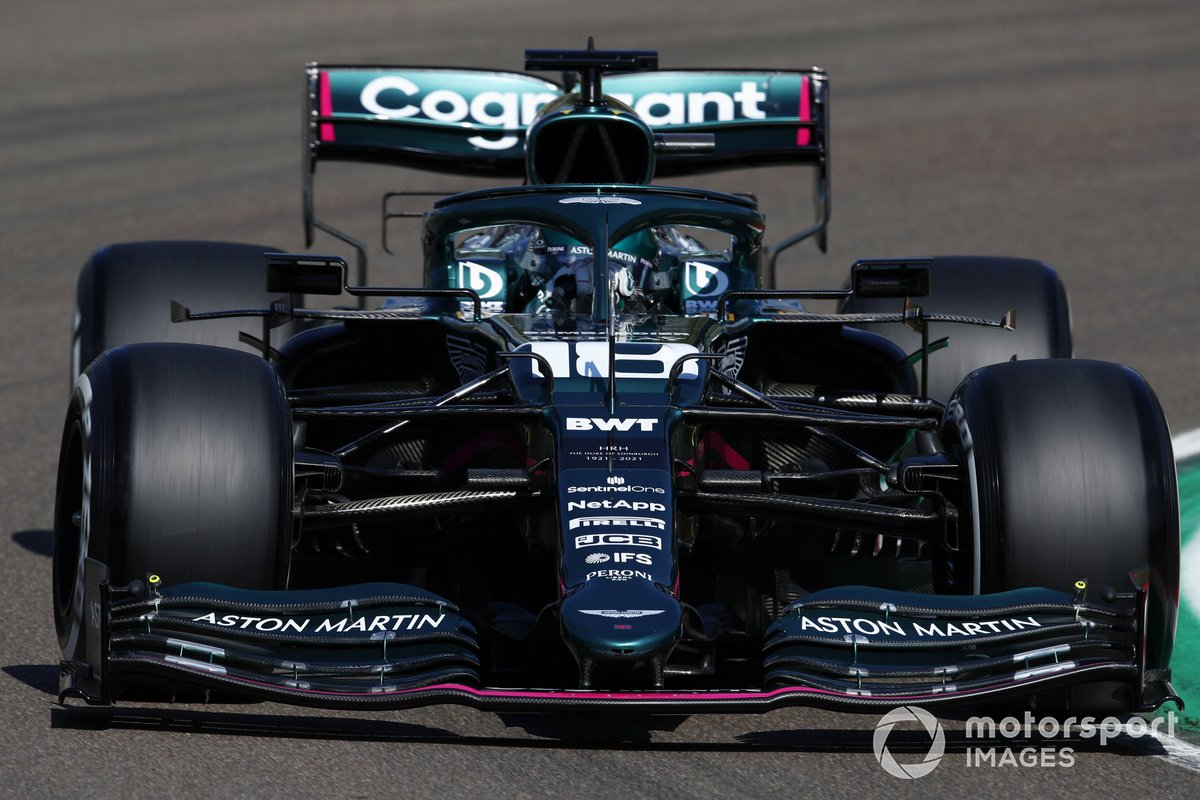 14/18
Aston Martin has new sidepod bodywork and new wing mirrors stalks for the AMR21 at Imola, as it looks to reduce the size of the inlets and improve aerodynamic performance. 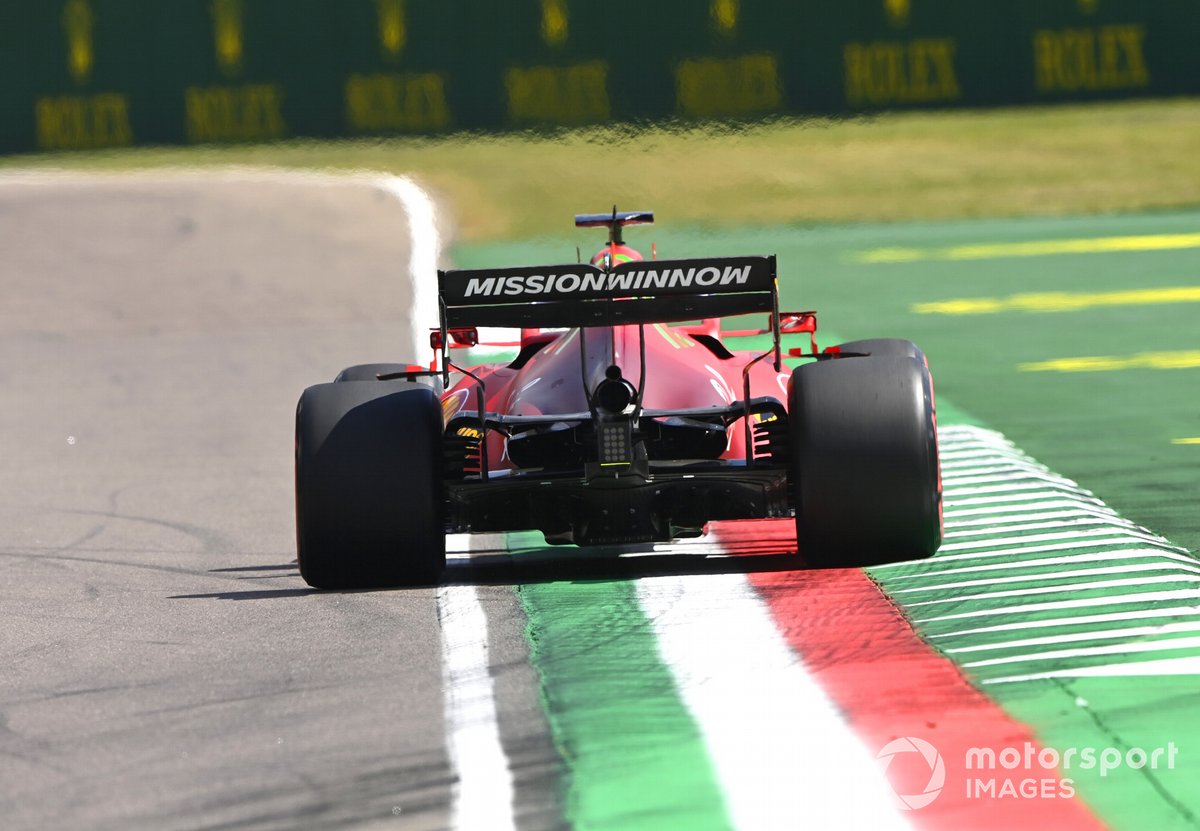 15/18
Much smaller rear cooling outlets on the Ferrari SF21 than it was forced to run in Bahrain. 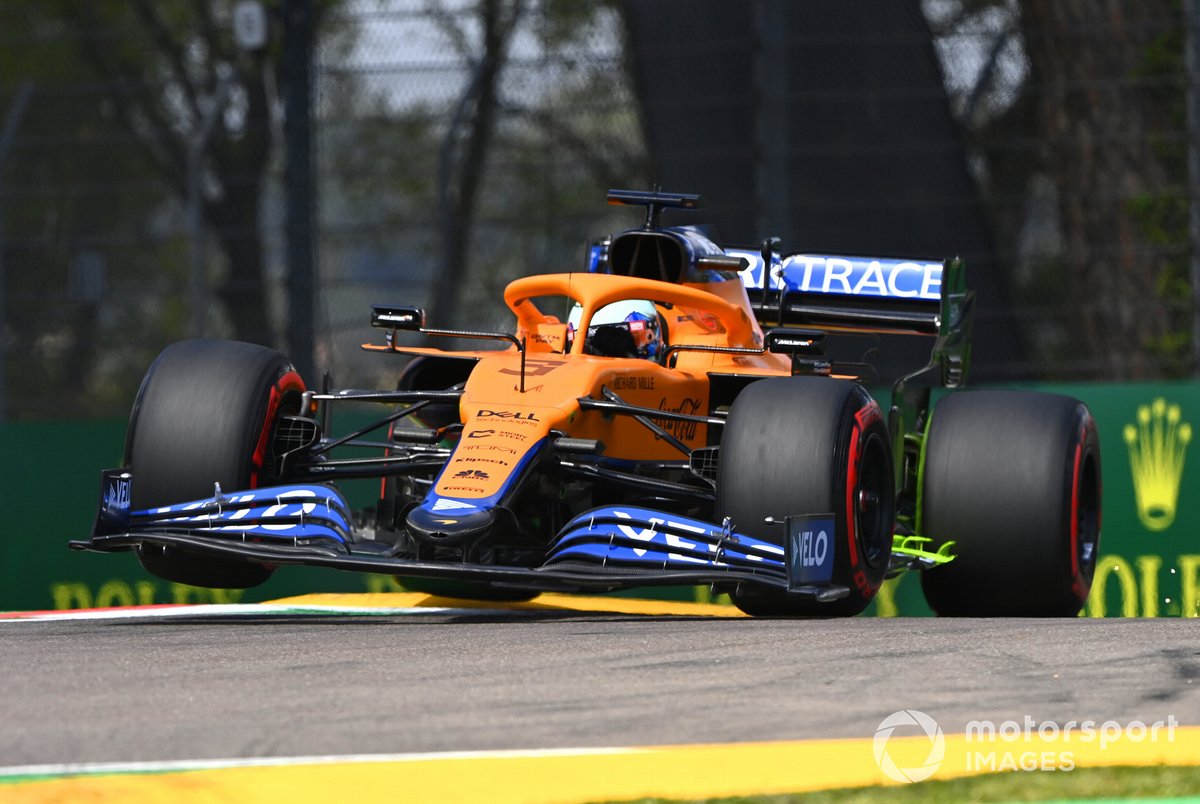 16/18
Flo-viz paint on the rear corner of the McLaren as the team looks to collect visual confirmation that the new parts in this region are performing as anticipated. 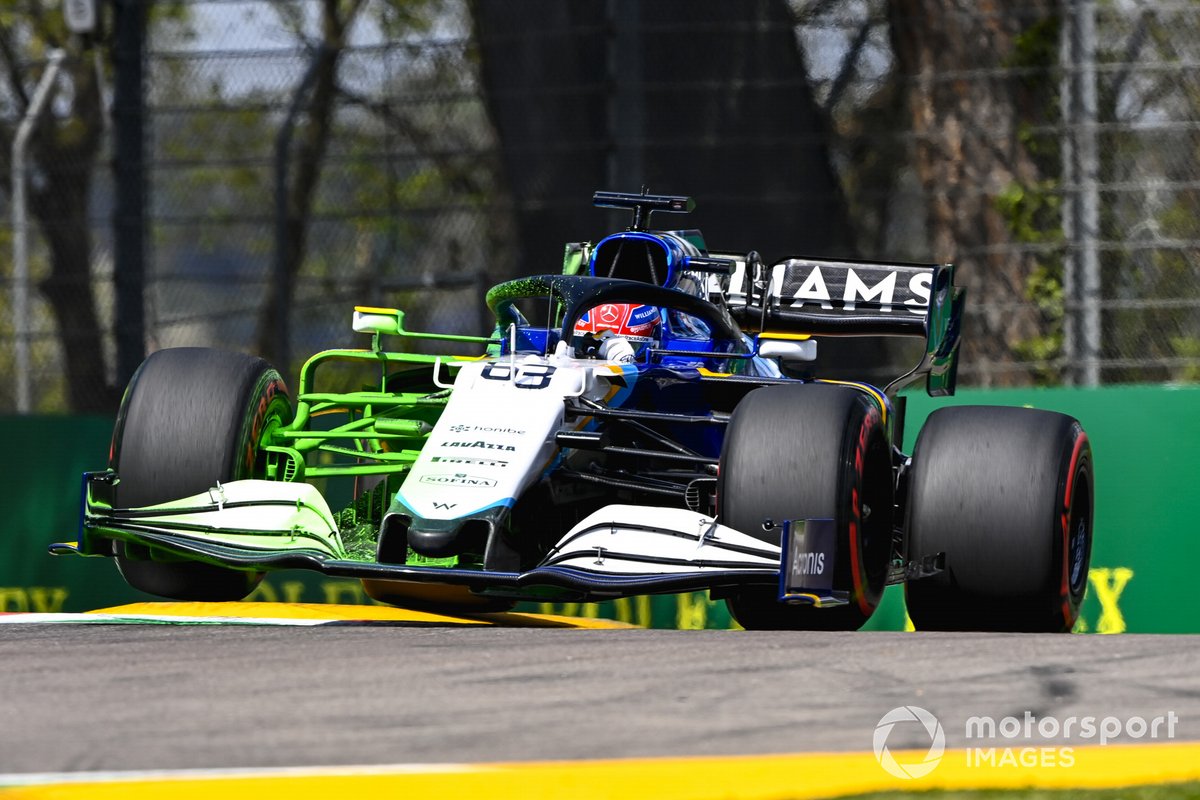 17/18
Flo-viz painted on the front end of the Williams FW43B will help the team identify any issues with their correlation between their simulation tools and the real-world environment, while also capturing information regarding their new front wing setup. 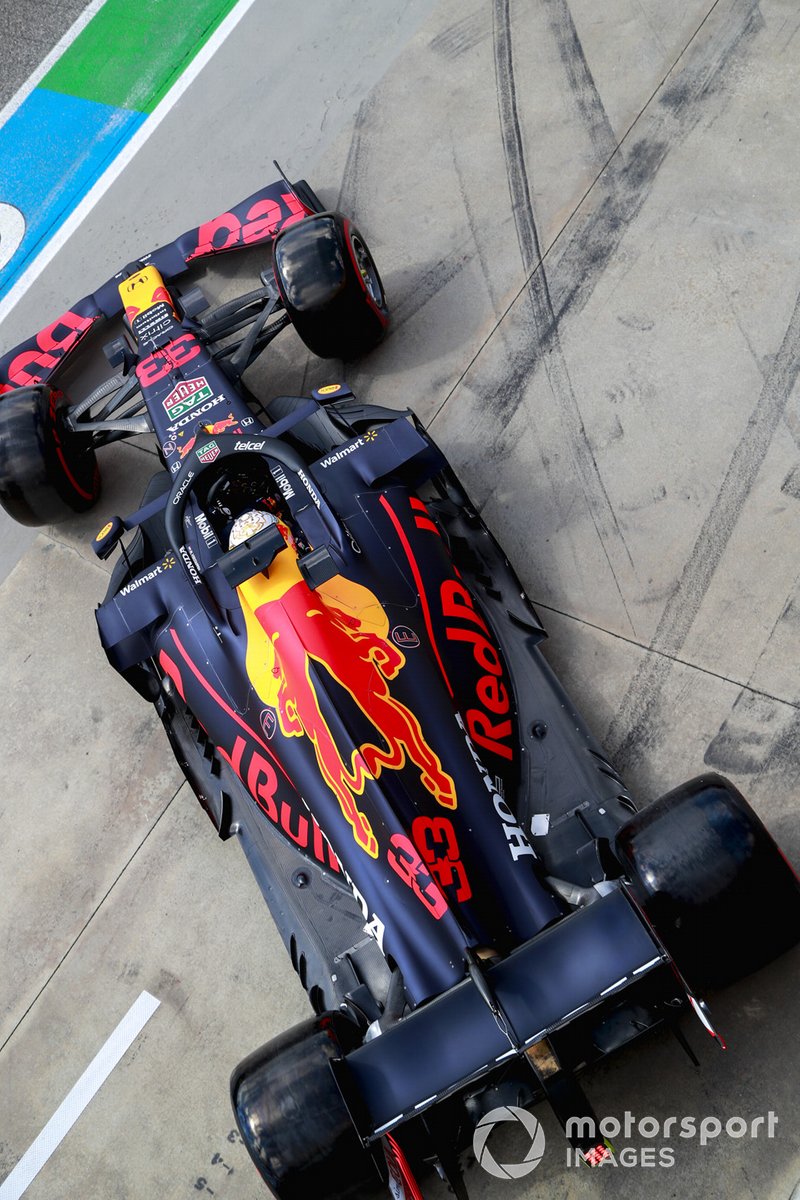 18/18
Aerial view of the Red Bull RB16B shows how narrow the bodywork is and also highlights the fins mounted on the floor beside the bellies of the sidepods.