Inside story: How Nasr helped coach Kvyat and Sainz towards F1 stardom

It seems bizarre to think of one Formula 1 driver coaching another, let alone two! But Sauber's Felipe Nasr once played teacher to Daniil Kvyat and Carlos Sainz Jr, as Oleg Karpov reveals. 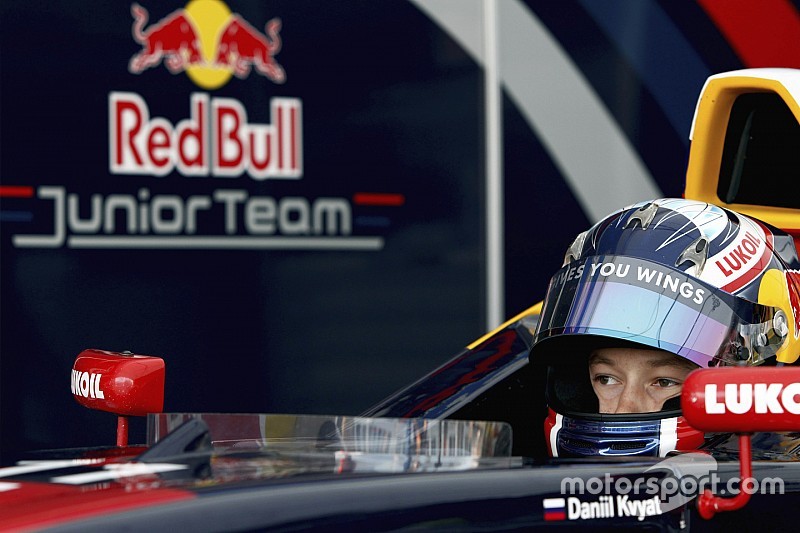 Antonio Fеrrari, who would wind up playing a crucial part in Red Bull taking on Kvyat and Sainz, enjoyed a very good 2009 in Formula BMW Europe as head of Eurointernational. His squad dominated the series with Felipe Nasr and Dani Juncadella.

The Brazilian, who back then raced in Red Bull colours, finished lower than second in only two of the 16 races and ended up easing to the title. His Spanish teammate popped up a Eurointernational 1-2 in the standings, beating Robin Frijns – who would then go on a three-year streak of consecutive titles.

For the 2010 title defense, Fеrrari wanted full support of the Austrian company and two young drivers to boot. Advised by his brother Alessandro, who works as a race director for major karting championships, he set his sights on Sainz and Kvyat.

Nyck de Vries, who was the duo's regular rival in karting, would end up at McLaren instead.

Fеrrari says: "I told Dr. Marko: 'These are two guys I'd like to go with'. De Vries wasn't considered, I thought he had an advantage [career] in karting, because he was very short, very small, and he was on a go-kart every day.

"And I had a special feeling these two guys would make it. The same feeling I had when I chose Nasr."

Marko was on board, but Fеrrari opted to test the duo before he made a final decision.

Eurointernational already had a contract with Red Bull and all it now needed was to fill in the blanks with the names of its chosen drivers...

Varano – where it all began

"After another successful kart race – I think it was the European Championship – I got a call from Antonio," Kvyat recalls as he sat behind the table in Red Bull Racing's F1 motorhome six years on.

"He told me that they were doing a test at Varano, that they wanted me there and that it was a test Dr. Marko would be well aware of. So I went to Varano, as did Carlos."

Autodromo Riccardo Paletti at Varano, the namesake of which perished during a startline shunt the 1982 Canadian Grand Prix, was and still is owned by Eurointernational. It is where almost all of the team's young drivers did their first tests.

"It's great because it gives us all the references from the drivers we took there," Fеrrari says. "[Alexander] Rossi, Daniel Juncadella, [Stefano] Coletti. All my drivers."

On their first day, Kvyat and Sainz weren't the only two drivers at Varano. They were joined – and coached – by none other than Nasr, who they now both regularly battle on Formula 1 tracks.

"Yeah, I remember that day," says Nasr. "Fеrrari told me: 'There are two kids, very talented, from karting, we're going to test them at Varano.' And he asked me if I could go and give them both some tips because it was going to be the first time they drove a single-seater.

"No surprises, it was Daniil Kvyat and Carlos Sainz. And now we're all in F1 together, which makes me feel a bit old!

"I was the one teaching them a little bit from my experience at the time, but it was clear they were both very talented. I'm happy they both made it."

"They put a cushion in his seat"

"I remember, when we first lapped the track, we were starting really far off of Felipe's pace," says Sainz. "I still remember his laptime. He was so fast and, arriving, we were two seconds slower. 'Oh my God, I'm so bad!' I thought.

"Felipe had probably done 200 laps or so there and he knew the BMW very well. But Dany and me, we were really pushing – and little by little, we were getting there."

One day was nowhere near enough for Sainz and Kvyat to overhaul Formula BMW Europe's finest driver. But it was more than enough to show off their potential to their future boss.

"I can only remember that they were both very very skinny," Nasr adds. "Like… I couldn't see them driving a-single seater, especially Daniil. He was like a 12-year-old kid!

"They put a cushion in his seat, because he couldn't see anything otherwise.

"And, of course, driving a go-kart is so different to driving a formula car and you get tired much quicker. But I remember they both adapted well and we saw the development."

"I don't remember anything like that!" counters Kvyat of Nasr's seat-cushion allegation. "I was quite skinny, but it was a normal seat. I think [Felipe] is dreaming or something!

"But yeah, he was really helpful. Formula [cars] are so different to karting, so he was just explaining basic things, you know. How to downshift, how to brake, which Varano kerbs can be attacked, which kerbs shouldn't be attacked and so on.

"He helped quite a lot. So, if he needs any advice now, he can always come to me," he adds, laughing.

"I remember I was very tired that day. Physically it was very difficult and I had calloused hands because of the gearshift and the steering wheel.

"My body was in pain, but I felt really, really good, because at the end of the day they told me I've done a good job."

One minute and how many seconds?

"The first time we take a driver to Varano, he almost never goes below 1m13s," says Fеrrari. "The record was then held by Robert Wickens, who is now in DTM with Mercedes. He did a 1m07.47s.

"We once went with Sainz just to beat that record and to try to go under 1m07s. He ran and ran, he did 20 laps within one hundredth, we put on, like, eight sets of tires, just to go around. 1m07.26s was the best we could do.

"The first time though, our goal is – if you go under 1m12.5s, it's a very good time. If you come there for the first time, that's what you need to do at the end of the day.

"When Sainz and Kvyat did their first day, they both did 1m09s. Maybe Carlos was a little bit quicker, but Carlos has more running, he did more kilometres.

Marko himself was on the phone soon enough.

"Antonio told me he [Marko] was going to call and he did," Kvyat remembers. "He said: 'My friend. I think you're the right guy for us, we would like to sign a contract.' "

Kvyat's deal was signed at Valencia during the European GP. "He said: 'Here is the contract, think about it and, if it's OK, sign it.' But, to be honest, I didn't really have to think that much."

Sainz was on board as well, the two now committed to being teammates in what would prove to be the final year of Formula BMW Europe.

A few months after the deal was done, Kvyat would set a new Varano record at 1m07.13s.

That record has never been surpassed...