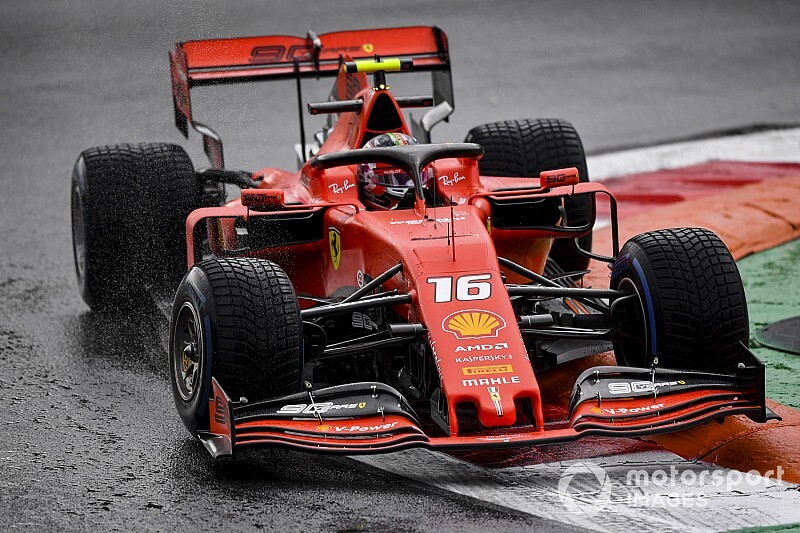 The Belgian GP winner kicked off Ferrari's home race with the fastest time after emerging on top from a flurry of improvements on slick tyres at the very end of FP1.

Leclerc headed the McLarens of Carlos Sainz and Lando Norris during a tricky, thrice-interrupted 90-minute session as drivers struggled to handle tricky conditions at Monza, where heavy rain hit overnight before conditions improved through the morning.

Initial flying laps were completed with full wet tyres but drivers switched to intermediates quite early.

The first red flag was caused when Kimi Raikkonen went off at Parabolica in his Alfa Romeo, just before the half-hour mark.

It took a short while to extract the Alfa and when the session resumed seven minutes later, it was halted again almost immediately.

Sergio Perez was the cause on this occasion as he lost control of his Racing Point exiting the Ascari chicane.

Sainz had a harmless spin exiting the same corner but Perez was not so lucky and his car slid backwards across the track and hit the wall heavily.

That turned the car round aggressively and caused the front left to slam against the wall as well, leaving Perez stranded.

Drivers were able to complete some sensible running between the second and third red flags as the track continued to dry, although many complained of tyre temperatures being an issue.

Toro Rosso driver Pierre Gasly said he had a "handbrake feeling" under braking after causing the third and final red flag when he beached his car briefly on a sausage kerb at the second part of the first chicane.

Gasly was able to get going again with the help of some marshals but the session had already been halted.

The times tumbled thereafter although drivers continued to have moments at the first chicane, which remained the wettest point on the circuit, although Antonio Giovinazzi was the worst-off there when he ended up facing the wrong way after a spin.

Alex Albon hit the top of the times with a 1m31.250s after a series of push laps, before the Mercedes duo of Valtteri Bottas and Lewis Hamilton moved ahead and stayed their with the intermediate-tyre running complete with 10 minutes to go.

Ferrari then sent Leclerc and Sebastian Vettel out on a set of medium tyres in the final minutes of the session.

Leclerc's first lap on slicks was two seconds slower in each of the first two sectors, but with DRS enabled and the track at its driest his final sector was a personal best.

The tricky conditions at the start of the lap meant even new fastest-of-all third sectors didn't look enough for any driver to improve on slicks.

Lando Norris skated off-track at the still-damp first chicane on soft tyres, while Leclerc had a small moment at the second chicane on his second lap, as did Vettel.

But Daniil Kvyat leapt from seventh to first with less than a minute to go on a 1m29.960s, triggering a swathe of last-gasp gains.

Sainz knocked the Toro Rosso off top spot, also on softs, as Leclerc then went second quickest behind the McLaren and stole P1 on his final lap, a 1m27.905s.

Norris gave McLaren a one-three, while Hamilton slotted into fourth on softs, Albon was fifth and Kvyat was nudged back to sixth.

Max Verstappen finished the session seventh while Vettel suffered a lack of confidence on mediums and was only eighth fastest.

Bottas had a spin at the first chicane and thus failed to improve on softs, so slumped to ninth in the times, while Gasly completed the top 10.

The tech secrets to being quick at Monza