Sebastian Vettel edged Max Verstappen by just 0.032s to set the fastest time in the final Formula 1 practice session ahead of qualifying for the Italian Grand Prix. 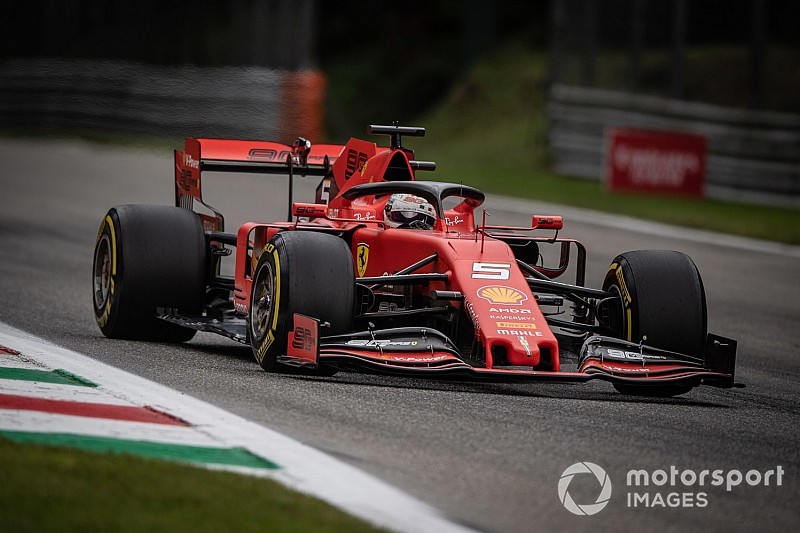 Vettel’s Ferrari teammate Charles Leclerc was the benchmark on Friday and set the initial pace in Saturday afternoon’s one-hour session.

But Leclerc made only a tiny improvement on a “useless” final run, allowing Vettel to leapfrog him for top spot and Verstappen to showcase impressive performance in his Honda-powered Red Bull.

Drivers were not allowed to take to the track until 10 minutes into the session to allow race organisers to complete fence repairs and remove a sausage kerb that had caused an enormous crash in the Formula 3 race that preceded FP3.

Leclerc hit the front after the first meaningful qualifying simulations and his 1m20.452s headed Vettel by 0.16s with 20 minutes of the session remaining.

On their final runs, Vettel improved twice – he overhauled Leclerc on a 1m20.331s on his first flying lap, then cemented top spot with a 1m20.294s on the second.

Leclerc, by contrast, only improved by half a tenth, bemoaning it as “a bit of a useless run”.

That meant he slipped behind Verstappen, who will not contest qualifying properly because he has a grid penalty this weekend, and Valtteri Bottas’s Mercedes.

Verstappen and Red Bull will be buoyed by Honda’s upgrade Spec 4 engine powering him to a lap time so close to Vettel on such a power-sensitive circuit.

Bottas nipped into third on a 1m20.403s, exactly the same time as Leclerc and ahead because he had set the laptime first.

World championship leader Lewis Hamilton was only sixth-fastest, behind a rapid lap from Renault’s Daniel Ricciardo.

Nico Hulkenberg backed up his Renault teammate with the seventh-fastest time as both lapped within half a second of Vettel.

Alex Albon dropped his left-side wheels into the gravel exiting the second chicane on his final qualifying simulation, and so only ended up with the eighth-fastest time as he failed to improve.

“I’m amazed how much the car changed,” said a bemused Albon. “Maybe the track gripped up more but I had no grip at all.”

Some laptimes were deleted during the session, including Leclerc’s second-fastest effort (at the time) with 10 minutes to go.

Lance Stroll lost his quickest time, a 1m21.554s, and fell to the back of the midfield group and only ahead of the two Williams drivers.