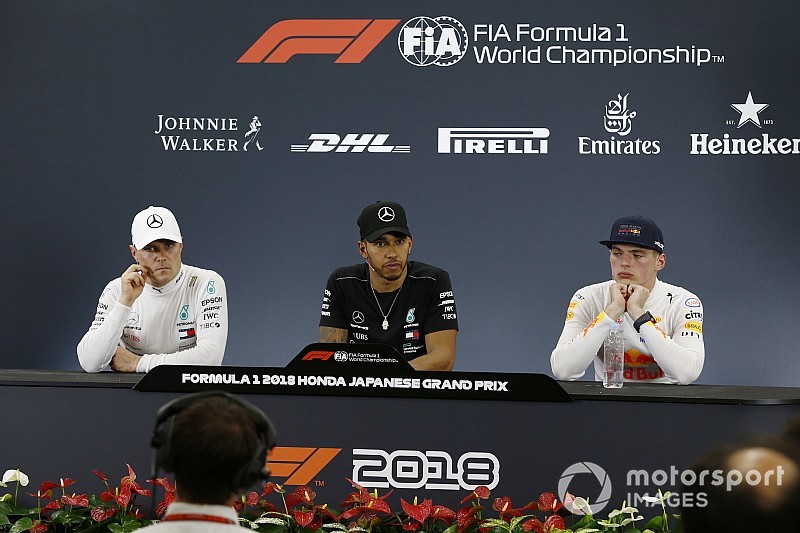 Q: Lewis, congratulations, another dominant display. You were enjoying that.

Lewis HAMILTON: I loved it. I was actually very, very happy. I think the whole weekend's been very strong from the team, it's a great 1-2 from Mercedes, it a true showing of the great strength in depth we have as a team. This track is the best track in the world. I don’t know why they don’t make tracks like this anymore but every second of the run it was just great fun. I was able to look after my tyres the way I wanted and just managed the pace. It’s really weird – obviously I have been racing a long, long time, but the happiness I have inside is as high as always. It’s a great feeling.

Q: Well just looking at your tyres, you don’t seem to be too bad on blistering, so you were just able to manage, but we did hear that you had some engine issues earlier in the grand prix, so it wasn’t all plain sailing?

LH: Yeah, I asked the team but they said it was OK. But really, these guys here you see at the track, the guys back at the factory, these guys work so hard to create this… this beast, and I’m so proud and grateful to have the chance to do what I do with it. I’ve been racing a long, long time now but, as I said, it feels like one of the first.

Q: If you win in America in two weeks’ time and Sebastian is not second, you will win your fifth world title.

LH: Honestly, I’ll take it one step at a time. Each week you have a positive weekend and you go to another grand prix and you’re not sure how you’re going to fare and how you’re going to perform, because there are still gaps in between, but I think we have gone from strength to strength this year as a team, so I really hope that we can… Austin is usually a good track for us, so I can’t wait to unleash this beast there.

Q: Congratulations, Lewis, great drive. Valtteri, you were absolutely setting the pace in Russia but it looked like you struggled a little bit more on this circuit and you had some real tyre management to do at the end against Max.

Valtteri BOTTAS: Well, yeah. Initially during the race, everything felt good, I knew what I had to do and I was really just executing the plan. The pace felt good. But at the end of the second stint I had some blistering, which made it a bit more tricky, but anyway, for me the job was to get to the finish line in P2.

Q: We heard from Lewis that he had some engine management issues early in the grand prix. Did you have anything like that or was it just the tyre blistering that was your main concern?

Q: Max, you’re pretty consistent here in Japan: third straight podium. It was very close with Valtteri at the end, but you locked up into the hairpin on the last lap. So did the opportunity slip away?

Max VERSTAPPEN: Yeah, we didn’t really have a chance, but in general I think to nurse the car home with the damage I had on the floor, we did a great job. The strategy initially was a bit tricky, with the supersoft tyres, but then once we got the soft tyres on it was actually working really well, and you could see that near the end we had the pace, even with the damage, so I’m happy about that.

Q: You had two incidents with the Ferrari drivers. First of all with Kimi, and you got a five-second penalty for that, which we heard on the radio you weren’t happy about, and then a failed attempt from Sebastian to overtake you down into Spoon. Take us through those two?

MV: Yes, I braked a little bit too late into the chicane, so I did everything I could to get back onto the track and I think I did it in a safe way, because I was not crazy-fast onto the track, but Kimi chose the wrong line in the chicane. He could have also just waited for me to come back on the track. We touched a little bit, but I think it’s really ridiculous those five seconds. But anyway, we managed to survive that and then even before the pit stop, the touch with Sebastian – in that corner you can’t overtake. I even gave him space, but he understeered into my car. It’s a shame, but still happy to be on the podium.

QUESTIONS FROM THE FLOOR

Q: (Scott Mitchell – Autosport) Lewis, you talked a bit about coming back stronger for the second half of the season and that you imagined having this run-in but you’ve been dominant, especially compared to Sebastian. You’ve not made mistakes, he’s been making mistakes. Are you surprised at how he’s faded from the title picture?

LH: Well, what I meant is that you have to set your sights high and so naturally, as you come into the season, you set the goal high, set the target high. When we got to mid-season we got that win going into the break and then again, really pushing to make sure that we come back even stronger so again, set the bar high. That’s what we were hoping to achieve, it’s not always the case, it’s really not always the case that you achieve your target but I think we have through really great hard work from everyone. In terms of Sebastian’s performance… Of course, I didn’t expect… Up until the mid-part of the season they were very strong and then we obviously got to Monza and then after that they were still quite strong from Monza, Singapore and then at Singapore was when it really started to tail off. I definitely hadn’t anticipated that they would tail off as they have. Not only have they lost a lot of performance, lost performance… just performances have not been coming in the same as they had before, as strong as they were before. I don’t really have an answer for that and it’s not something I’m really focused on. I’m sure Sebastian could tell you why. We’ve just been focusing on trying to do the best job we can and maximise the potential of our own ability, that’s all we can do.

Q: (Heikki Kulta – Turun Sanomat) Valtteri, how much are you hoping that Lewis will win the championship already in Austin to get more normal circumstances for the last three races to challenge him?

VB: You know of course I’m still able to challenge him. It just depends on the situation like the race in Russia so I’m still trying everything I can to keep upbeat for every race and trying to challenge. I felt yesterday in the qualifying it was really getting better and better for me and it was pretty close in the end between us. Today, after the start, I knew what was going to be the case. We had to bring one-two home and that was it. There are not that many races left and at some point I would guess he’s going to get the title hopefully and then we will see.

Q: (Andre Venema – Formula 1 Magazine NL) Max, speaking of penalties, do you think Vettel deserved a penalty as well, for what he did to you?

MV: Well, I’m not the one who makes the rules. I think otherwise a lot of penalties would have been avoided anyway in Formula One. I think it’s a similar scenario to what I had in China with him. Of course, we didn’t spin off the track but he drove into the side of my car. I think we could have been a bit more careful.

Q: (Scott Mitchell – Autosport) At the moment, we have a lot of situations where you’re having to either avoid or manage blistering. I just wondered… on that phenomenon, is that more of a problem this year? How bad is it and how much are you having to manage it over the course of this season?

LH: Honestly, I think Pirelli have done a really good job this year. The cars are faster than ever before, we have more downforce than ever before so there’s more force going through the tyres. And so every time they improve the tyres, we improve the car and we pretty much have a similar issue of blistering, but they do have the lower gauged tyre which we used earlier in the year on which we didn’t see any blistering. I’m not really sure why they didn’t continue using that for the year but I’m sure that’s probably something they will engage in next year. We have definitely not been able to go flat out all the time and we are having to manage temperatures in order to make a one stop race work -  the loss in the pit lane is so big you want to always try and make sure you do a one stop. But I don’t particularly have a problem with it. I think it takes skill and management to keep the pace up and lose as little as possible whilst still keeping the tyre alive. Would we prefer to have no blistering? For sure, if we could keep pushing the whole way and not having rear overheating, that would definitely enable us to follow for longer and race for longer but that’s something that they are constantly trying to battle, I’m sure.

VB: I think we had to do a lot of management at pretty much every race this season and especially at the last few there have been issues with the blistering. Once we are getting to a certain temperature, we know it’s going to happen at some point, so then we’re just not pushing to go over those temperatures and trying to manage. At some places, like today, when it’s hot, in this high energy track, laterally, it’s pretty difficult and it does feel at times that you are completely cruising round which is not ideal. You know there’s so much potential in these cars and my thinking is if everyone did one stop today, if you do one stop pushing flat out it would be more fun but that’s the issue for everyone now. The cars are quicker than ever. I was involved in some of the testing for next year’s tyres a couple of weeks ago and I’m sure they are pushing flat out and hopefully it’s going to be a bit better next year.

MV: I think like Lewis said, it was well explained.