Karthikeyan start the Brazilian GP ahead of De la Rosa

The third free practice and qualifying sessions got underway today at the Interlagos circuit with over 15ºC lower temperatures than yesterday, which helped reducing the tyre degradation. 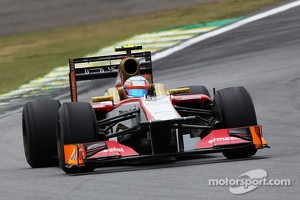 The overnight set-up changes paid off and the HRT Formula 1 Team also managed to improve traction on their cars’ during FP3.

The first raindrops hit the track between sessions but it stopped before the start of Q1 and the team decided to go for a dry strategy despite the track was still damp.

It dried out lap after lap and Narain Karthikeyan and Pedro de la Rosa, despite being hit by another car on his flying lap, also improved their lap times throughout the session to finish 23rd and 24th respectively.

The HRT Formula 1 Team remains confident ahead of the 71-laps race tomorrow after having set competitive times, improving the overall grip and the data showing lower tyre degradation from yesterday.

The weather forecast predicts rain for tomorrow’s race but conditions change pretty easily and the team will be ready for whatever conditions they will have to face to get both cars across the finish line and end the season in the best possible way.

Pedro de la Rosa: "The track was damp when we went out but we decided to go for the dry strategy because the dry line would come up pretty quickly.

The first laps were a bit tricky but it improved a lot towards the end. However, I’m not happy with how qualifying ended. Our car was competitive and we certainly could have done better but I was on a flying lap when I was hit by another car.

It was a dangerous manoeuvre because I couldn’t move aside given the track conditions. As a consequence of the impact, the rear suspension bent and also punctured the rear tyre.

I went back in for a new set of mediums and fortunately managed to put in one more lap improving my time. I really hope the car is not badly damaged because the race is tomorrow and I want to be able to do my best here in order to finish the season on a good note”.

Narain Karthikeyan: "This morning we did a good job with the car and the fact that the track temperature was lower than yesterday also helped in reducing the tyre degradation.

But before qualifying it started raining and we were not sure whether to go out on intermediate tyres or slicks. Even though the track was still damp, we finally decided to go out on the slicks and, although it was difficult at the beginning, it was the right thing to do.

We struggled to generate enough tyre temperature but I am quite satisfied of how it went overall. For tomorrow, I would prefer the race to be a wet one but whatever the conditions will be, we’ll try our best as we have always done”.

Toni Cuquerella, Technical Director: "Weather conditions turned the qualifying session into a gamble. Despite the track was damp, we decided to go for the dry tyres. The track was improving lap by lap and it was important to stay out until the end.

Narain did a good job and so did Pedro given the circumstances. Unfortunately, he was hit by another car at one of the most dangerous parts of the track and it is even worse considering the track conditions.

The rear suspension of his car got damaged but we can fix it for tomorrow. We have different strategies planned for the race but everything will depend on the weather.

It seems it’ll rain in the morning and dry out during the race but we will have to be ready for whatever happens”.

Alonso moves up a grid position; penalty to Maldonado in Brazil

Ayrton did not truly die

Top 5 ugliest cars of Formula One

Twelfth place for Tagliani in Brazil