BMW third driver Robert Kubica remained at the top of the time sheet in Friday's second practice for the Canadian Grand Prix, his best of the afternoon a 1:16.965 which was about half a second slower than he had been in the morning. Renault's ...

BMW third driver Robert Kubica remained at the top of the time sheet in Friday's second practice for the Canadian Grand Prix, his best of the afternoon a 1:16.965 which was about half a second slower than he had been in the morning. Renault's Fernando Alonso was second quickest in the afternoon and Williams No.3 Alex Wurz was third. 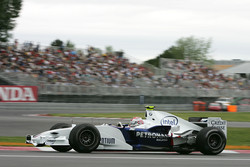 Track temperature was up to 38 degrees at the start of the afternoon session and Super Aguri's Franck Montagny led out. Third drivers Kubica, Robert Doornbos (Red Bull), Giorgio Mondini (MF1), Neel Jani (Toro Rosso) and Anthony Davidson (Honda) followed on, along with the McLaren of Juan Pablo Montoya.

Super Aguri's Takuma Sato joined the track action along with MF1's Christijan Albers and Doornbos set the first time, 1:21.441. He was swiftly ousted by Jani's 1:21.141 while Davidson took third, Montagny fourth and Mondini fifth. Davidson was next to the top, 1:19.977, two and a half tenths up on Doornbos, who had improved to second.

Doornbos then took over with a 1:19.811 but Davidson came back with 1:19.216 for six tenths up. Albers posted fourth and Sato fifth, while Kimi Raikkonen's McLaren and the Toyota of Jarno Trulli went out for installation laps. Wurz and Super Aguri third driver Sakon Yamamoto were also on track.

Trulli clocked fifth and Davidson lowered his top time to 1:19.135 then Wurz took over with a 1:19.004. Trulli improved to third and Toyota teammate Ralf Schumacher took the fifth spot. Tonio Liuzzi's Toro Rosso slotted into seventh and Kubica went straight to the top on his first flyer, 1:17.249.

Trulli was then second, 1.7 off the BMW, followed by Wurz, Ralf and Davidson. Felipe Massa was the first Ferrari on the time sheet in ninth and Scott Speed's Toro Rosso took eighth. Massa moved up to fifth and teammate Michael Schumacher clocked second on his first effort. Tiago Monteiro's MF1 managed 12th while Yamamoto rounded off the list at the time in 17th.

Jenson Button's Honda arrived in eighth and the Renault of Giancarlo Fisichella followed him into ninth. Button lost his slot to teammate Rubens Barrichello but climbed to second quickly afterwards, 1.2 off Kubica. Barrichello moved up to seventh and Fisichella to third while Montoya squabbled with the Toro Rossos and MF1s in 14th.

Jacques Villeneuve's BMW Sauber started with 17th, followed by Christian Klien's Red Bull into 18th, the Villeneuve shot up to fourth. Klien moved up to 14th and Alonso set his first time of the day in 12th. The second BMW Sauber of Nick Heidfeld took third on his first flyer but still nobody was within a second of Kubica.

Alonso improved to second, 1.1 off the lead BMW, but was quickly replaced by the Williams of Mark Webber who finally broke the barrier and was just under nine tenths off Kubica, who lowered his top time to 1:16.965. Raikkonen closed the gap further when he posted second, half a second off the BMW.

Wurz improved to fourth after being shuffled down the times but there was little movement on the time sheet despite quite a few laps being put in. Barrichello climbed to eighth after being moved outside the top ten and Doornbos did likewise to sixth. Albers made an effort for 12th and Nico Rosberg's Williams was the last to get on the time sheet, 26th behind David Coulthard's Red Bull.

Rosberg improved to 18th and Liuzzi jumped up to fifth, while Wurz took the second spot off Raikkonen, just under four tenths off Kubica. Alonso climbed to fifth after being moved down the order and in the final couple of minutes he went better again for second, just over a tenth down on Kubica. There were no last gasp fliers and Kubica remained fastest.

"We have done two long runs, which were pretty good," he said. "The pace was fine, with quick lap times, and we were consistent. We are looking strong. I have no problems getting used to a new track, so this morning I was also able to be quick straightaway."

Alonso was happy enough with Renault's initial efforts. "The only problem we had today was with quite poor braking stability, but that is also a question of getting used to driving the car with this downforce level and its lower grip levels," the Spaniard commented. "Overall, though, it was a good first day."

Wurz cheered up after a difficult morning. "This afternoon, when it was a bit warmer and there was more rubber on the track, our car suddenly came together and behaved more as we had expected. Now I think we are going in the right direction in terms of set-up, so in the end I am actually quite pleased in contrast to this morning when I was very grumpy!"

There are not many conclusions to be drawn from today, as usual. Renault looked competitive -- Alonso was the fastest race driver -- and Honda and BMW were fairly active, but others were rather divided. Raikkonen was fourth but Montoya was down in 17th, while Webber was seventh and Rosberg 21st.

Both Ferraris were some way down the list as were the Toyotas; we'll have to wait until tomorrow to see who has the pace. Liuzzi did well in eighth but the usual pecking order is not likely to be disturbed on Saturday. Final top eight classification: Kubica, Alonso, Wurz, Raikkonen, Davidson, Fisichella, Webber, Liuzzi.