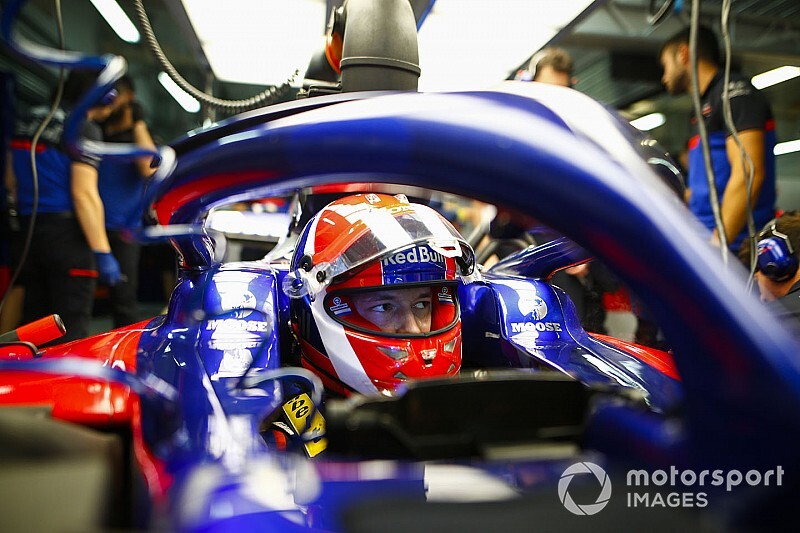 Daniil Kvyat has labelled the rule that's preventing him from using a special helmet design in the Russian Grand Prix as "a joke".

The Russian had a new white, red and blue helmet prepared for the Sochi Autodrom-based race, but was denied permission by the FIA to use it in Friday practice.

This was because F1's sporting regulations only allow drivers to substantially deviate from their primary helmet livery in one event during the season, and Kvyat had already run a one-off design in Italy.

Speaking to media earlier, Kvyat said he hadn't been aware of the rule and described it as "a joke".

"It it is a good helmet. Hope you saw it. I don't know... I put it there in the garage, just to show it to everyone," Kvyat said.

"We just worked with my designer [Jens Munser], [on] something unusual. Russian flag theme, I guess. Just something a bit different, but simple at the same time, so yeah. Very happy with design.

"Maybe I will use it tomorrow. Let's see. I still don't know what could be the consequences. But to be honest, there are bigger problems [for F1] to focus [on] than a helmet design of a driver, I guess."

"For me there are bigger things to worry about I think in this paddock than whether you change your helmets or not. Especially for [his] home race, I find it quite silly. Shame for Dany."

The Kvyat ruling could be an obstacle to Gasly's own plans to run a special helmet livery in engine supplier Honda's home race in Japan, as the Frenchman had already raced an Anthoine Hubert tribute helmet in Monza.