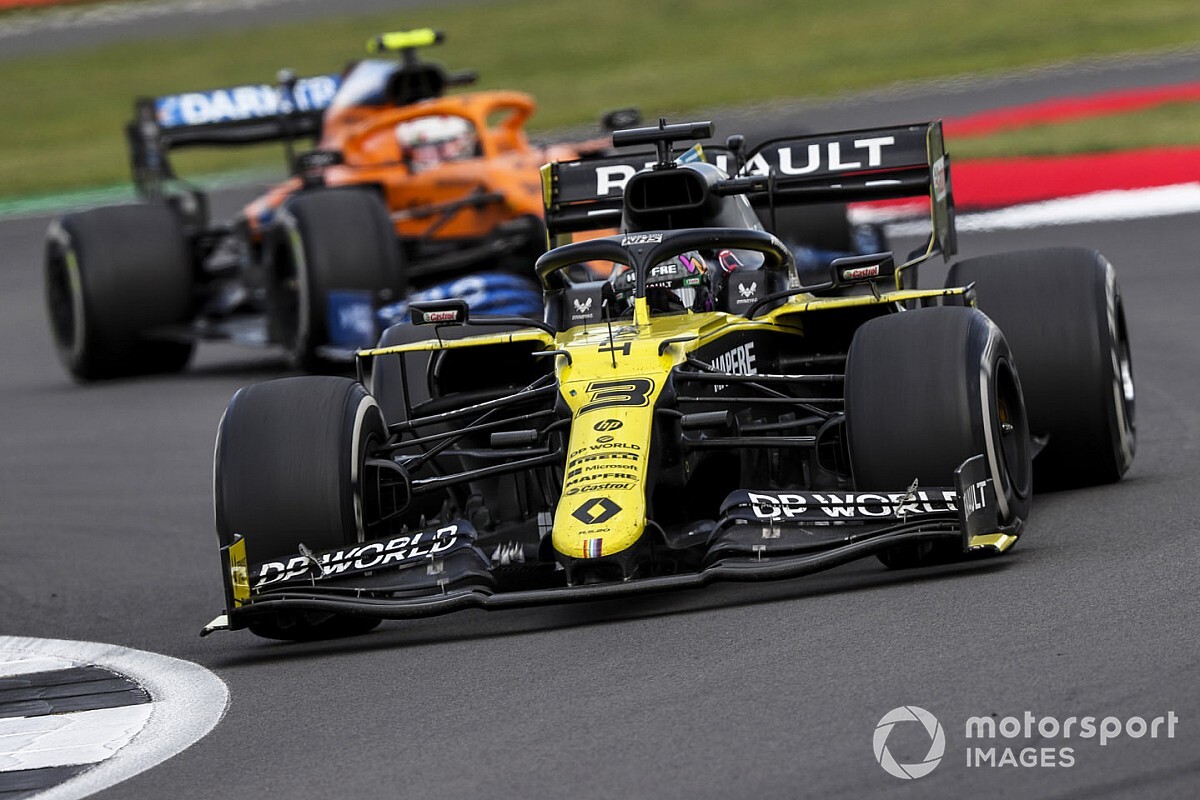 Lando Norris has explained how a misjudgement while altering settings on his steering wheel left the door open for Daniel Ricciardo to snatch fourth place in the British Grand Prix.

The McLaren driver had been looking to hold off his Renault rival and future teammate in the closing stages of last weekend’s Silverstone event. But with three laps to go, Ricciardo made a move down the inside at Stowe to grab fifth, which then became fourth when the other McLaren of Carlos Sainz hit late tyre trouble.

Norris has revealed how multiple factors came together at the moment to give Ricciardo the opportunity to pull off what he reckoned was a ‘basic’ pass.

“I was struggling with a couple of things, obviously tyres being one of them,” explained Norris. “But the move he did was probably one of the most basic moves you could actually do. There was no defence. For me it was a misjudgement from me trying to change some things on my steering wheel.

“Also my left mirror being completely smashed, so only kind of judging where he was off my right mirror. At that point on the straight he was directly behind. I couldn't see where he was. At the point I kind of looked down to change something and I looked back up and he was already alongside, so I was caught out.”

Norris said he and the team would reflect on what happened in those moments to ensure that rivals were not given such an easy time in the future.

“It was my mistake looking back on it,” added Norris. “It's something I need to and we as a team, we will try and improve on for next time, and not get caught out by this kind of thing: especially into the one overtaking opportunity really on the whole track.”

Speaking last weekend, Ricciardo admitted he had not expected to be able to pull off the move until near the end of the straight – when he suddenly got a speed boost from the DRS.

“I had quite a late run on DRS,” said the Australian. “The effect came fairly late on the straight and maybe he was clipping the battery. I caught him late and I didn’t feel at the start I was going to have it. Late on I got the run and I thought I’d dive to the inside and put my nose there. But by the time we braked I was pretty much there.

“It was a pretty straightforward one in the end. It was nice to get that one on him and give him a taste of next year! I am just kidding...well I am, but I’m not.”