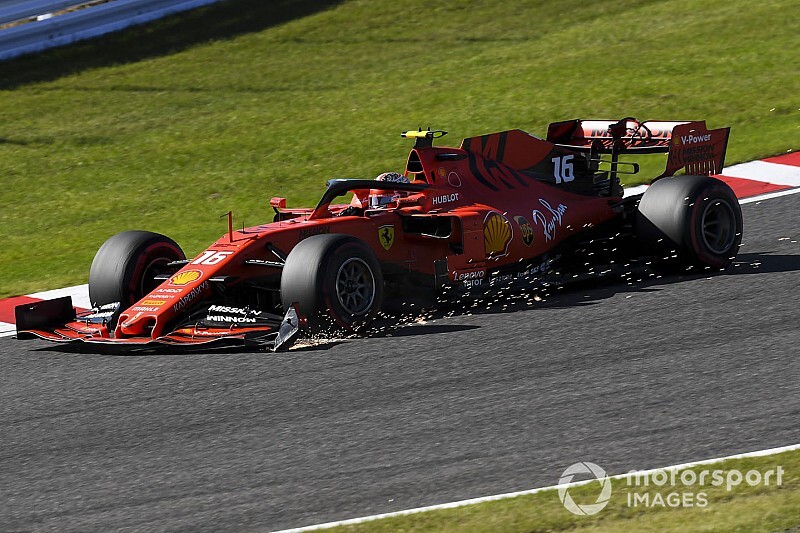 Ferrari driver Charles Leclerc has been handed two time penalties for his incidents during the Japanese Grand Prix.

Leclerc broke the left front endplate of his car in a second-corner clash with Max Verstappen at Suzuka, and the part dragged along the ground for much of the opening lap.

F1 race director Michael Masi had safety concerns about the part breaking off and, during communication with the team, he was advised that Leclerc would be pitted at the end of the second lap.

But, with Leclerc not losing much time initially, Ferrari kept him out – with the part then breaking off on the second lap.

The flying parts struck Lewis Hamilton's Mercedes, ripping off his right-hand side mirror, and pieces also ended up in the front brake duct of Lando Norris.

Leclerc has received a 15-second time penalty, five seconds for his initial collision with Verstappen and 10 for Ferrari leaving him out with a damaged car.

The penalty drops Leclerc from sixth to seventh, behind Renault's Daniel Ricciardo.

The stewards explained that "by not bringing car 16 into the pits at the end of lap 1, immediately after the incident for a safety inspection when there was damage clearly visible and then by telling the driver to remain out for an additional lap after telling the Race Director otherwise, the team created an unsafe condition on the circuit which only narrowly avoided being a major incident and also increased the likelihood of additional incidents after the one noted."

Asked by Motorsport.com about the Leclerc situation, Masi said: "I was originally advised that they would be pitting the car. They then chose not to and subsequently Ferrari was instructed by me to pit Charles' car, which it did.

"On the second lap, the elements came off and they were still instructed to pit because we could not confirm if there was going to be anything else that was going to come off."

However, as well as the stewards' claim that Ferrari was appeased when it saw part of the wing detach, Binotto suggested that the delay in pitting was also a response to Leclerc's pace.

He said that the team was willing to pit as soon as the FIA demanded it.

"What happened is we got the damage and Charles is the one who is driving and can feel the car, and how it behaves," he said. "From outside we saw the wing was broken so it would have needed to be changed at some stage.

"He still had the right pace, stayed out, but then the FIA asked us to come in for safety reasons and we immediately accepted the decision.

"The stewards realised maybe we should have come in earlier and we have been penalised for that as well."

Pushed further on whether or not he was slightly annoyed Ferrari did not pit when he expected them to, Masi said: "More than 'slightly annoyed' from a safety perspective."

McLaren team principal Andreas Seidl said he was upset about what Ferrari had done, especially because the broken front wing parts cost Norris the chances of a good points-scoring finish.

"We obviously strongly disagree with competitors leaving cars out on track with entire front wing endplates hanging down, putting everyone at risk," he said.

"Unfortunately when this endplate then exploded, we were catching in our front right brake duct debris, from Ferrari. Brake temperature went through the roof so we had to box him to clean it. And then the race was over."