Ferrari’s Charles Leclerc told his team that he felt his defeat to Sebastian Vettel in the Singapore Grand Prix was "unfair", after an undercut allowed his teammate to triumph. 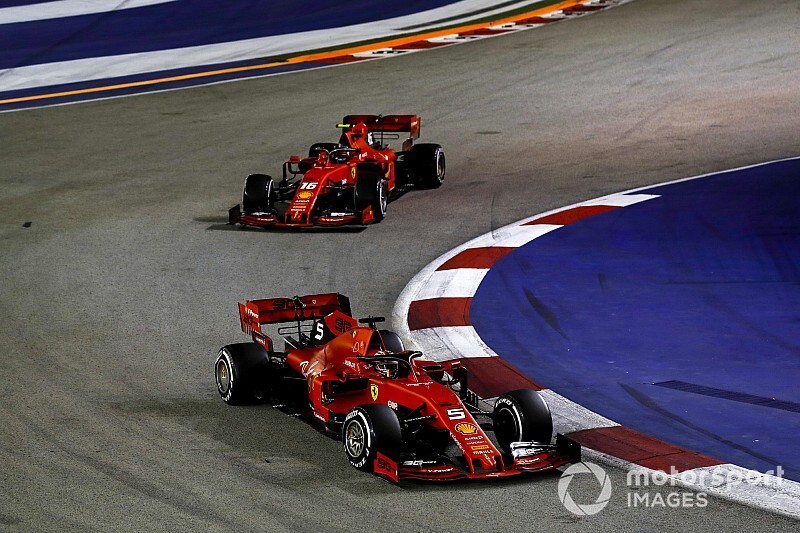 Leclerc led the opening phase of the Marina Bay race, as he slowed the field up in a bid to keep his tyres alive for as long as possible.

Ferrari elected to pit Vettel first and the early stop on fresh tyres handed the German enough of a pace advantage over one lap to jump Leclerc with the undercut.

Speaking over the team radio during the first safety car phase, Leclerc made it clear that he was not happy with what happened – as he was urged to concentrate on the race.

“My head is down and it will be down until the race [is done] - I just want to let you know my feelings,” said Leclerc.

“To be completely honest with you, I don’t understand the undercut - but we will discuss after the race.”

Later on, during the second safety car phase, Leclerc responded to a message from the team telling him to look after his power unit, and in effect call off the fight.

After the race Leclerc reiterated that he would speak to the team later on, and explained that while the situation was hard to take, he was at least happy Ferrari got a 1-2.

“Obviously it is always difficult to lose a win like that, but in the end it is 1-2 for the team so I am happy for that,” he said. “It is first 1-2 of the season, and all the guys deserve it. We arrived here hoping for a podium and we come back with a 1-2 so I am happy.

“I am disappointed on my side as anyone will be. Sometimes it goes that way, but I will come back stronger.”

Race winner Vettel said the strategy call had been made by the team, as he got a very late warning to come in for fresh tyres.

“I think just the corner before, turn 21, so the last turn before the pit entry, I received the call,” he said. “I don’t know if someone pitted for me [to trigger it], but it worked today so I am happy.”