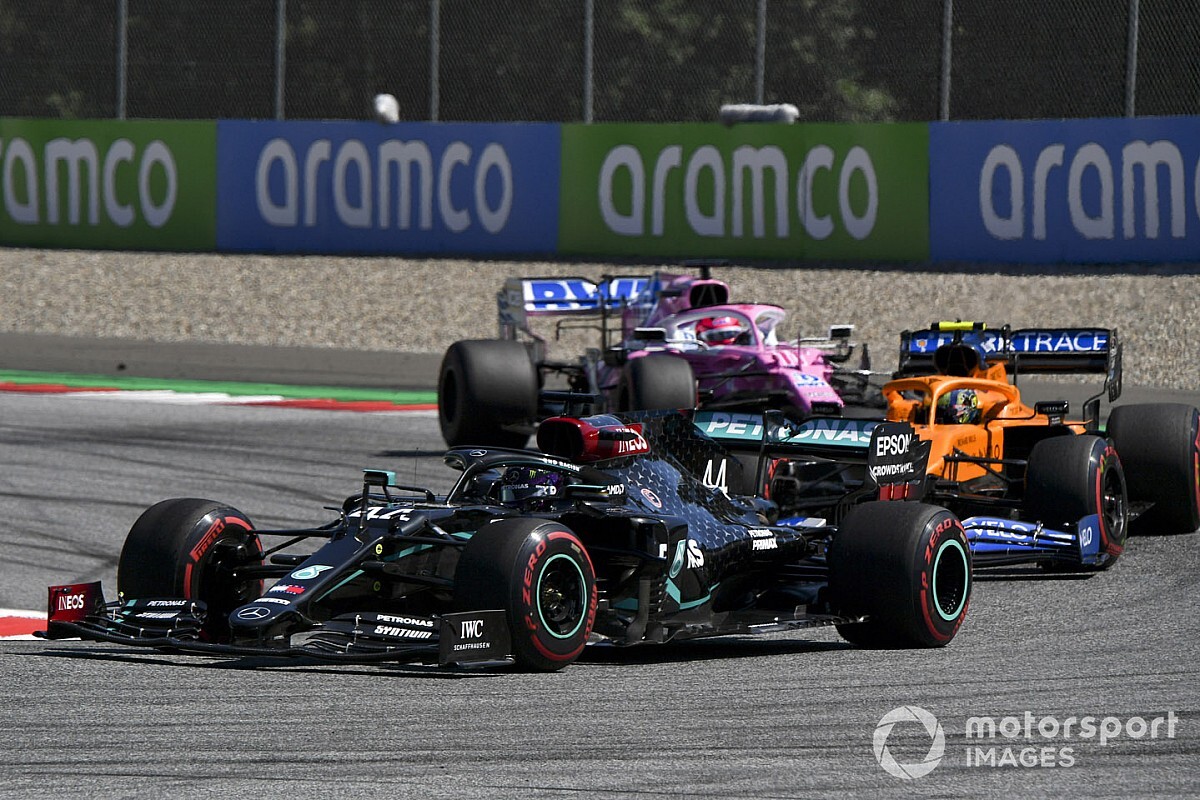 Lewis Hamilton says the first safety car that triggered a round of pitstops in the Austrian Grand Prix spoiled the strategy gamble that he’d planned to jump teammate and eventual race winner Valtteri Bottas.

Hamilton knew that the only way to beat Bottas was to run a different tyre strategy. However, when the safety car came out Hamilton had no choice but to follow Bottas into the pits for a double-stacked stop, which ended any chance of running an off-set strategy and going to a different tyre.

Both drivers were given the hard compound for what was clearly going to a long run to the chequered flag, as the team believed that it was too early to fit the medium. Racing Point’s Sergio Perez was the only driver to take the medium at the stops.

Soon after leaving the pits Hamilton said on team radio that he’d wanted to take the “opposite tyre” and do something different to Bottas.

“The fact is here at this track you know that in order to have an opportunity to pass the car in front of you always want to try and go for the opposite strategy,” Hamilton said when asked by Motorsport.com. “Now when you're when you're in a team like ours, the first car always gets the priority in the stop. And so if you both come out on the same tyres, you're pretty much stuffed at a track like this, particularly where it's very, very hard to overtake.

“It's something like eight-tenths of a second advantage you need on the car ahead to have an opportunity at fighting with them. So I knew that on the same tyre, I would most likely be finishing behind. Then obviously the safety car came out and that really kind of messed with things, because I was gonna plan to try and extend my stint as long as I could then stop for the opposite tyre, basically, and just take a risk, because ultimately [when I’m] behind that’s ultimately what I like doing, taking a risk.

“But it didn't work out that way, and I don't think it was a big issue. I mean, there was so many other things that came into play.”

Hamilton admitted that when heading into the pits he hadn’t reminded the team of his desire to do something different.

“Well, you know, as the safety car came out, I didn't know which tyre they’d be putting either,” he said. “I really just hadn't thought of it, I assumed that they'll put us on the hard, being that we were quite short and there was still a long way to go, and the hard tyre generally if you stop earlier, that's the better tyre for the distance.

“As I said, I'm a risk taker. But I didn't prompt them, and normally before the stop, I would have prompted them, but because of the safety car, there are other things that came into play, and I hadn't done it, so it's totally fine.”