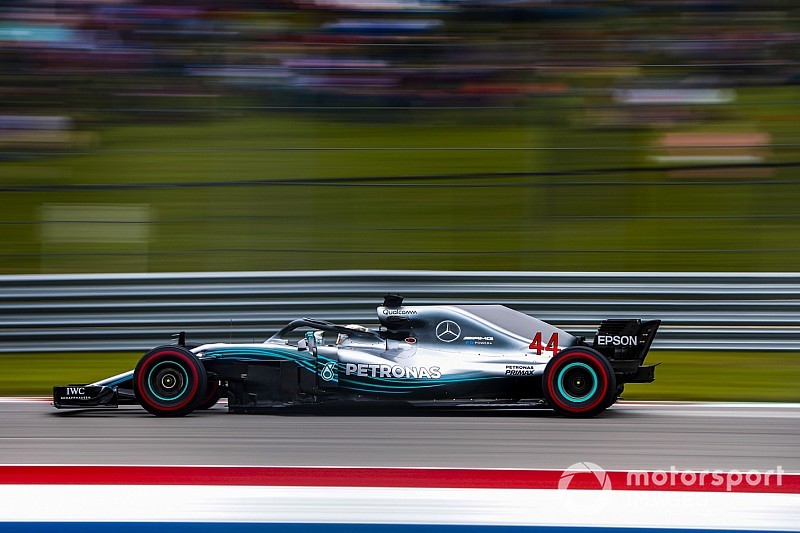 Mercedes Formula 1 driver Lewis Hamilton says being in a "different headspace" going into qualifying helped him beat the Ferraris to pole for the United States Grand Prix.

Hamilton's third pole in a row comes as he bids to secure a fifth F1 title at Austin on Sunday.

He beat championship rival Sebastian Vettel, who will start fifth thanks to a grid penalty, by 0.061s and the second Ferrari of Kimi Raikkonen by 0.070s.

Hamilton said: "I knew it was going to take perfection and neat laps to take them.

"The first lap was good, but being that I was less than one tenth ahead I knew the next lap these guys would improve also so there was no room for error.

"Considering there's been some Q3s in the past races where I have had to bail out the second one as it was not good enough, I was very strict with myself today, to pull through the second lap.

"The approach for us has been very sturdy, we've not been getting ahead of ourselves.

"I'm so happy. It was a different feeling today coming in. I don't know why.

"I don't know if I slept longer or what but I was in a different headspace going into qualifying which is weird, but it was a good one."

Hamilton said it was not a perfect lap but was pleased to overcome the Ferrari's apparent advantage in the first sector through the rest of the track.

"There's so many different variables, you are really just on your tippy toes the whole way, trying to catch it and grab it, utilise grip," he said.

"The first section for some reason they were particularly quick there.

"Some of that it is Turn 1 I would say mostly, they generally have a car that's better in corners like that. The rest of the lap was good, there were no mistakes.

"That second one I was able to capitalise."