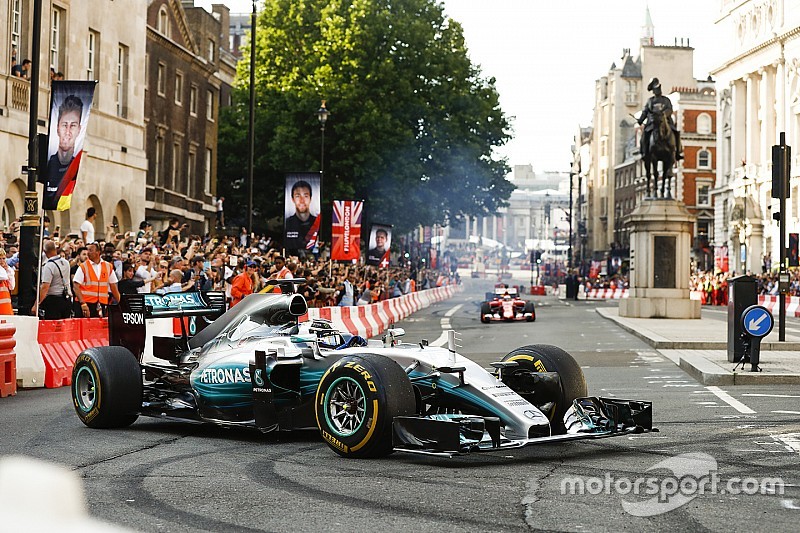 The prospect of a London grand prix has been boosted by the city mayor believing it "should be possible" and Formula 1 targeting a grand prix on the capital's outskirts.

A grand prix in the English city has been little more than a pipe dream for several years but it is an option F1 owner Liberty Media has continued to explore.

The future of the British Grand Prix is under threat because current host Silverstone has activated a break clause in its contract with F1 that means the 2019 race will be its last without a fresh deal.

However, F1 has made it clear that it wants to maintain its presence in Britain, if not grow it, and it has emerged that a new option to race in London is being considered.

While a London grand prix has numerous logistical challenges, city mayor Sadiq Khan is said to consider it realistic.

A spokesperson for the mayor's office said: "London is always open to hosting the world's biggest and best sport events – from the final of UEFA Euro 2020 to the NFL, and the Cricket World Cup to Major League Baseball.

"The Mayor believes that it should be possible to organise a race in London in the future and has asked his team to explore options with F1."

F1 is pushing for more street races and Vietnam will join the calendar in 2020 with a Hanoi city event.

In an interview with London newspaper the Evening Standard, F1 sporting director Ross Brawn said that a race on the city's outskirts is the best option.

"I think because F1 is a week-long activity minimum, the disruption it would cause in the centre of London would be unacceptable," said Brawn.

"I don't think Londoners really need to worry about us taking over the centre of London for a week.

"But there are things on the periphery that are being explored - not slap-bang in the centre of London but Greater London."

F1 held a demonstration on the streets of the capital last year ahead of the British GP, the first such event since one in 2004.

However, a full-on race was recently labelled “inappropriate” by David Richards, chairman of Motorsport UK, the country’s governing body.

Formula E held races in London in its first two seasons, but the electric single-seater series only used a circuit built within Battersea Park.

There has not been any public progress on Silverstone negotiating a new deal, although this week its governing body British Racing Drivers Club has dismissed a report that an offer had recently been presented to F1.

Before the end of the current season, F1 commercial chief Sean Bratches hinted that it had options beyond Silverstone for the British GP.

However, Brawn said that F1's efforts to pull off a race in London would not necessarily come at the expense of Silverstone, which has been the British F1 host since 1987.

"We'd like to see London complement Silverstone, not replace it," said Brawn. "We could see ways we could make it work both sides.

"London is an iconic city with a massive history in the sport and there's huge enthusiasm here."

Leclerc won't be as "accommodating" as Raikkonen - Brawn

Renault has found "a lot of kilowatts" on dyno, says McLaren