As the chequered flag dropped under the Yas Marina floodlights, Kimi Raikkonen found himself fifth with Romain Grosjean seventh. 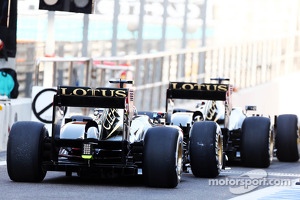 A straightforward Q1 session saw both drivers set a banker lap on medium tyres, before emerging for a single stint on soft rubber to sail through in third [Kimi] and seventh [Romain]. Q2 by contrast was a closely fought affair; the Finn and Frenchman progressing in ninth and eighth respectively, separated by less than three hundredths of a second after two runs apiece on softs.

The top ten shootout of Q3 again saw both black and gold cars make two appearances on soft tyres, with their opening runs good enough for a pair of top six placings. As the chequered flag dropped under the Yas Marina floodlights, Kimi found himself fifth with Romain seventh.

Kimi Räikkönen, (P5, 1:40.542): “Today wasn’t too bad overall. In the early sessions both yesterday and today I struggled a bit to get the car working how I wanted, but in the evening when the temperature is cooler it’s been much more to my liking. This is good as the race will be in the evening so we’d prefer it that way around for sure. The short wheelbase car seems to suit my style a bit better too, so hopefully we can continue this way for tomorrow. Of course, you always want to be as far up the grid as you can and we clearly weren’t the fastest today, but you never know what might happen on Sunday so we’ll see what we can do.”

Romain Grosjean (Q: P7, 1:40.997): “That was one of the trickier qualifying sessions we’ve had recently, and seventh on the grid is not where we expected to be after the pace we’ve shown so far this weekend. The car felt quite different this evening – particularly in terms of front end – so we’ll need to investigate where it’s not quite working. It’s a long race tomorrow in tough conditions and everyone around us will be starting on the same tyres, so we need to try and find some performance from the data tonight to achieve our target of the podium.”


How was qualifying for the team? That was a great qualifying performance from Kimi who was unlucky not to be in front of both Mercedes after the final sector of his qualifying lap narrowly cost him a potential third position. By contrast, Romain had a bit of a struggle today and wasn’t as comfortable with his car as he has been so far this weekend. Having both cars inside the top ten is a decent result however, as we expect to see strong race pace from the E21.

What is possible tomorrow? Our target on pace alone is to race and beat Mercedes; ending the weekend with another good points haul over them in the Constructors’ Championship in the process. Of course, we’ll be ready to capitalise on any opportunities that Red Bull may present us, but they are looking very fast once more here.

What are the tyre strategy considerations for the race? There don’t appear to be too many permutations here, so it could be quite a straight-forward race. Certainly, the different options that presented themselves in New Delhi don’t look to be available here so we’ll watch how the race evolves and react accordingly.