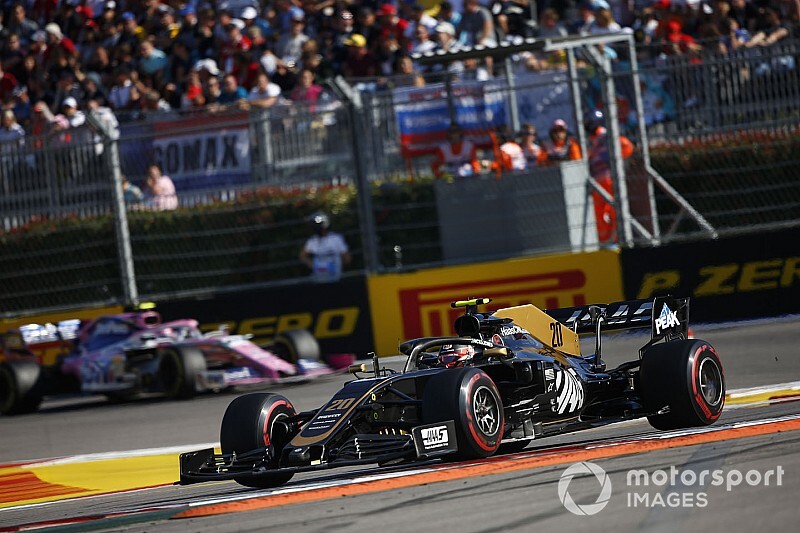 Kevin Magnussen has hit out at the "bullshit" penalty he was given for not driving through the bollards at Turn 2 after he ran wide during the Russian Grand Prix.

The Haas driver had been locked in a battle with Racing Point's Sergio Perez for seventh place, but braked too late defending the position and ran across the dome kerbs at Sochi's second corner.

Drivers who miss the kerbs completely are supposed to rejoin the track through two bollards.

Although Magnussen had instead hit the kerb, he still attempted to follow the procedure. However, due to the angle he was running he was unable to swerve left to take the first bollard and so missed it.

Despite telling his team immediately over the radio about what had happened and why it would have been "dangerous" to swerve around it, the stewards handed Magnussen a five-second penalty which eventually cost him one position.

After the race, Magnussen did not hold back in letting it known that he felt the punishment was too much.

"This is bullshit," he said. "We have this Turn 2, which is a crap corner. It's just stupid. You know, just make it… put gravel there, or something.

"I'm not a safety expert, and I never will be, but I think the way it happened today was I missed that corner, went through a load of crap offline on the run-off and lost a hell of a lot of time and got penalised by my own fault.

"The FIA didn't have to do anything because I didn't completely miss [the corner]. It wasn't black and white, and yet they choose to give me a penalty."

Speaking on the radio afterwards, team principal Gunther Steiner said: "If we wouldn't have a stupid idiotic steward, we would be eighth."

Magnussen later said it was "unbelievable" that the stewards had elected to punish him for an incident where his main focus was on avoiding an accident.

"You had to stop the car and turn very sharp to the left to make both of them. I get it if you miss, you just go straight completely. But I had so much more speed, that when I got onto the run-off I was carrying way too much speed.

"I was only trying to keep the car under control and aim for those bollards, because I knew I had to take whatever I could.

"Then I lose the position, lost a whole lot of laptime, I have dirt on my tyres for the rest of the laps, so I lose extra amount of lap time and I would have been way better off letting Perez go and stay on the track and go in behind him.

"So already I've been penalised in a natural way, which is what we want it to be. So I didn't miss both of them.

"We've been told if you miss both of the kerbs you have to take both of the bollards. I did one and half missed, so it's in a grey area. So you could say it's a grey area and they had a choice, and they still chose to give me a penalty."