Mallya: First lap collisions "hurting us" in the championship 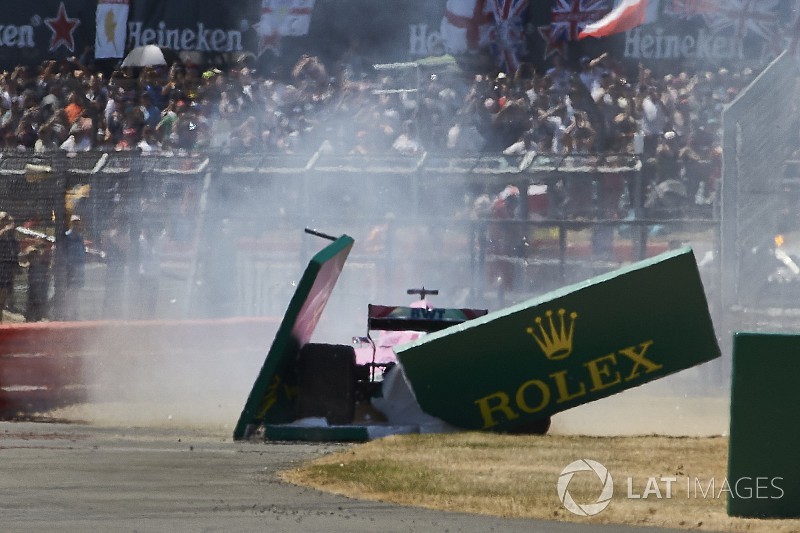 Sergio Perez lost the rear of his Force India at the start of the British Grand Prix while trying to avoid Nico Hulkenberg under braking into turn 1, ending up spinning across the track and dropping to the back of the field, before recovering enough to claim the final championship point in 10th.

Force India drivers have been involved in similar opening lap incidents in the past; prior to British GP Esteban Ocon was wiped out by Pierre Gasly at the returning French GP.

Mallya, who was seen in the F1 paddock for the first time in 2018 at Silverstone, says these incidents could have serious ramifications on the teams standings, where Force India is locked in a tight battle with McLaren and Haas and also has its sights on Renault.

“Sergio dropped to last on lap one after spinning at the first corner, which proved costly,” he said. “It’s the fifth time this year that one of our cars has suffered a first lap incident and it’s hurting us in the constructors’ championship.

“Despite the spin, Checo battled back, pushed hard, and overtook a lot of cars. To score the final point was a remarkable recovery drive.”

Perez originally finished 11th on road but was promoted to 10th after Gasly was handed a post-race penalty for a collision between the two drivers on the penultimate lap.

“With two laps to go, Gasly pushed me off track. I gave him enough space but that was not enough: we still made contact and I lost the place. I believe it was an unfair move,” he said.

“I’m pleased that the FIA took action after the race to penalise Gasly, which gave me back the final point.  My focus now is to rest after the triple header. We will analyse these races and come back strong for Germany.”

Meanwhile, Esteban Ocon held off Fernando Alonso and Kevin Magnussen after the late-race safety car to cross the chequered flag in seventh place.

The result elevates Force India back up to sixth place in the standings, one point ahead of McLaren and just two behind Haas.

“The safety car didn’t make things easy because the tyres were cold at the restarts and it was not easy to keep Fernando [Alonso] and Kevin [Magnussen] behind me in the last few laps.

"I feel very tired mentally because it was a really big fight until the end. It’s important that we scored more points to add to the good points we picked up in Austria last week.”