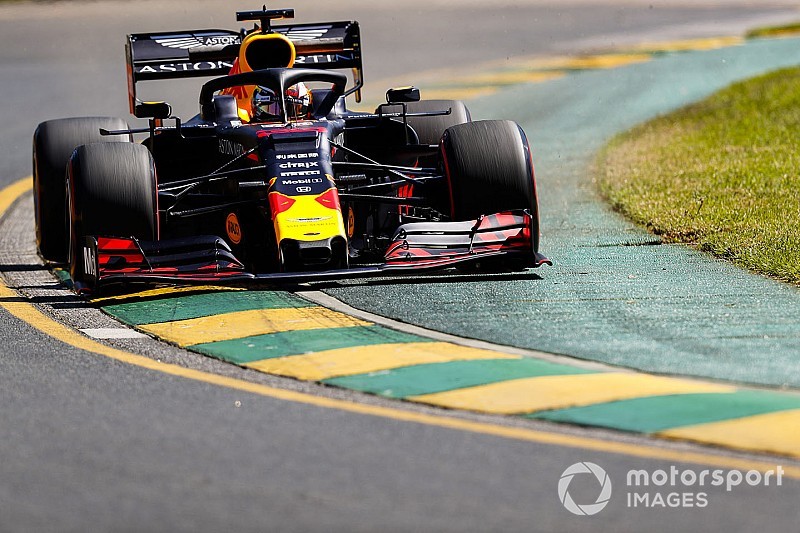 Red Bull motorsport advisor Helmut Marko reckons the Formula 1 team is "far from at the optimum" of what its chassis can do after a "rallycross" moment during the Australian GP.

The title-winning squad bagged a podium in the Australian Grand Prix, its first on-track podium in the season opener since 2014, to kick off its new partnership with Honda in encouraging fashion.

Max Verstappen finished more than 20 seconds behind Mercedes' race winner Valtteri Bottas, but hailed the result after a tricky start to the weekend.

Marko told Motorsport.com that Red Bull's set-up left the RB15 "like a rallycross car" at one point during practice, but also expects more fundamental performance gains.

"We had an ideal weekend in Melbourne in terms of engines," said Marko. "The engine ran smoothly from day one until the race. Also the adaptation, driveability and all that.

"In terms of the chassis, we still had deficits.

"Certainly to a degree because of the fact that we never drove with the full package in Barcelona because [Pierre] Gasly destroyed essential parts that we only had once [at that stage].

"We let ourselves be irritated and we went much too far in the hard direction with the set-up.

"You could see that in the third practice with Verstappen. From curve 3 to 4, the wheels went crazy, he drew black lines there. It was like a rallycross car.

"And we're also far from at the optimum of what the chassis can do. But that's nothing that can't be repaired in a very short timeframe."

Marko said he was "overjoyed" at the commitment Red Bull was getting from Honda, which celebrated its first podium in 11 years with Verstappen's third place in Melbourne.

While Red Bull emerged second-best in Australia, behind Mercedes but ahead of Ferrari, Marko cautioned establishing a pecking order until after the upcoming races in Bahrain and China.

"Maybe Mercedes doesn't even know why they were so far ahead in Melbourne," he said.

"Let's call it Melbourne effect. The track temperature was between 40 and 44 degrees. That's 15 degrees more than in Barcelona.

"I think we'll only see the exact balance of power on the upcoming circuits, which have more significance, like Bahrain and China."

As well as expecting Red Bull to up its game on the chassis side, Marko is excited by further progress from its new engine and reiterated a willingness to take penalties in the pursuit of performance.

Why comeback Kubica is not the same driver