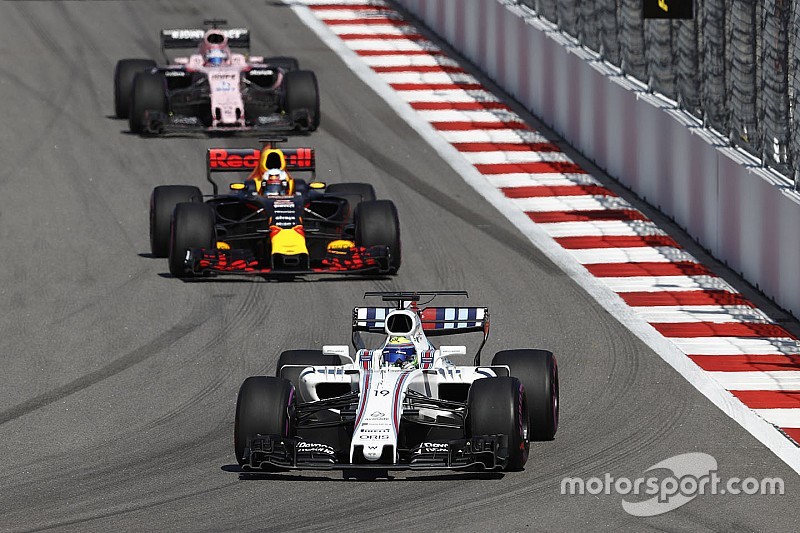 In his latest Motorsport.com column, Williams driver Felipe Massa looks back on an eventful Russian Grand Prix that saw him lose sixth place - and a chance to be in the same position in the points - to a puncture.

The Russian Grand Prix was a good event for myself and the Williams Martini Racing team. I had a good feeling all weekend and everything worked well – from the first practice sessions through qualifying and the start of the race.

The only downside was a slow puncture in the final stages. It meant we had to make another pitstop, and that cost us three positions. It was a shame because we deserved to finish in sixth place, and instead I came home ninth.

As well as missing out on six points because of something outside of our control, the lost points mean I did not have the chance to be ahead of Sergio Perez and Daniel Ricciardo in the drivers’ championship. So I’m ninth overall, rather than sixth.

In situations like these, there is little you can do except accept it and move forward. Our car worked very well over the Russian weekend and, although Ferrari and Mercedes were unbeatable, we came close to Red Bull – so it would have been nice to have come home in the top six.

We still do not know the cause of the puncture, because I had had my scheduled pitstop and was running stress free, well away from the kerbs, on the supersoft set which would easily have got me to the chequered flag.

All I know is that the pressure started dropping on the right front tyre. Ironically, after the stop I went back to the track with the ultrasofts and started pushing to the maximum, stressing the tyres a lot and using the whole track and kerbs – and everything worked smoothly with no punctures!

There was a lot of interest after the race about the little misunderstanding I had late on with Sebastian Vettel as he came up to lap me.

He was following Valtteri Bottas, and I saw him coming up behind me as we came out of Turn 2. Around the Turn 3 curve, though, it was quite dirty and I did not want to get off of the clean line – nor force Sebastian to get on there either.

So I thought ahead about the braking zone before Turn 4, and duly moved to the left to leave the inside free for him.

I think he did not know exactly what I was doing, so he hesitated a little before going through. In the end, I don’t think it was a significant episode – but simply a small misunderstanding that did not affect the outcome of his race.

We are now heading to the start of the European season, which is going to be a very interesting time for F1.

The Barcelona weekend will be an important one to assess the technical updates that many teams will bring to the race track, and I am eager to see what Williams can do.

We have confirmed our position in the first races of 2017 as behind the top teams, so we will be working hard to improve. I’ve seen many good ideas at the factory, so it will be fascinating to see how things pan out in Spain.

Let’s just say I am confident about how things will go – even if that puncture meant I couldn’t leave Sochi standing sixth overall in the drivers’ championship.

F1 was held back by Ecclestone, says Carey