It was a cloudy and damp start to the Spanish Grand Prix weekend and in the first Friday practice session only nine drivers of 28 set a time, six of them third drivers. Fastest man of the morning was Ferrari's Felipe Massa, who clocked a best of ...

It was a cloudy and damp start to the Spanish Grand Prix weekend and in the first Friday practice session only nine drivers of 28 set a time, six of them third drivers. Fastest man of the morning was Ferrari's Felipe Massa, who clocked a best of 1:15.796. He was three tenths quicker than teammate Michael Schumacher and Williams No.3 Alex Wurz was third. 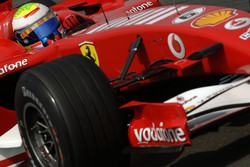 Unfortunately for Jacques Villeneuve his engine was suspected to have suffered some damage when it was being prepared for transport from the N?rburgring. The regulations do not permit BMW Sauber to open the engine and check so the team opted to change it as a precaution. Therefore Villeneuve will incur the 10 place grid demotion in qualifying.

Track and air temperatures were around 20 degrees at the start of the session, which was declared wet. Giorgio Mondini is on duty as MF1's third driver this weekend and was first out on track, followed by BMW Sauber counterpart Robert Kubica. Super Aguri's Franck Montagny and Takuma Sato were next and Red Bull No.3 Robert Doornbos.

Wurz and Toro Rosso third driver Neel Jani also took to the circuit, along with Honda No.3 Anthony Davidson. A few others appeared for installation laps but no-one was in a hurry to get going. After 10 minutes Wurz posted a 1:29.581, with Mondini over a second behind.

Doornbos took the second slot and closed the gap to just over a tenth then Jani took over from Wurz with a 1:28.648, nearly a second up. Doornbos returned to second, two tenths off Jani, and Wurz responded to go over five seconds quicker, 1:23.334, then improved again to 1:20.222, the gap over eight seconds.

He stayed out for a further flyer and shaved another couple of tenths off. Davidson posted second, seven tenths down, and Kubica went to the top with a 1:18.904. Davidson improved as well but remained second. Montangy hadn't even set a time when he pulled his Super Aguri to the side of the track in the middle sector.

Kubica's next was a 1:17.877 as the track conditions got better, but by half way through there were only six drivers on the time sheet. Doornbos moved back up to behind Kubica, the gap just about a second, then he improved to within four tenths. Sato took sixth on his first timed lap, while Davidson went fastest with a 1:17.401.

Kubica bounced back to clock 1:16.628, nearly eight tenths up. Wurz took second, a tenth and a half off, and Mondini improved to sixth ahead of Sato. The Ferraris of Michael and Massa went out in the final few minutes; Michael took to the top of the times with a 1:16.362 and was immediately demoted by Massa's 1:15.796.

Michael closed in to three tenths off his teammate but it was session over, with only a third of the drivers setting a time. It looks nice for Ferrari at the top of the list but it means very little at the moment. End of session classification: Massa, M. Schumacher, Wurz, Kubica, Davidson, Doornbos, Jani, Mondini, Sato.

Alonso not worried about Ferrari form

Moving quickly along to Spain