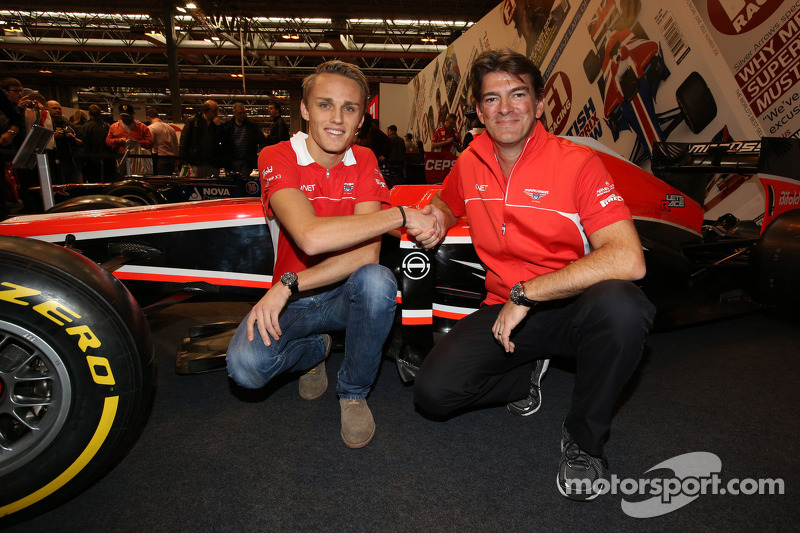 The team retains the same driver lineup from 2013.

Formula 1 fans attending the Autosport International Show at the National Exhibition Centre in Birmingham today were among the first to hear our announcement that we will retain Max Chilton for a second season. Max will race alongside Jules Bianchi once again, completing our 2014 race driver line-up.

Max was present on the F1 Racing Magazine stage at the Show as Team President & Sporting Director Graeme Lowdon announced the news that the 22 year old British driver, who made his F1 debut in 2013, will be racing for us again in 2014.

“I am really happy to be continuing with the Marussia F1 Team into a second season," Max Chilton said. "Continuity is important for the Team but also for me as a driver. You learn such a lot in your debut season, but the second year is when you can really pull all of those new experiences together and show your true potential. That has always been the case for me in the junior categories and I’ll be aiming for a similar step in my second year of F1 competition. I would like to thank the Marussia F1 Team for their continued faith and support. They are a great bunch of people who are extremely hard-working and ambitious and I can’t wait to embark on our 2014 season challenge together.”

“We are delighted to announce Max directly to an audience of Formula 1 fans at the Autosport International Show today," said Graeme Lowdon, President & Sporting Director, Marussia F1 Team. "Judging by the warm reaction we received at the Show, they felt it was well worth the wait to hear the news first hand and we at the Marussia F1 Team felt it was a fitting reward for the incredible support we receive from them. Keeping the fans at the heart of our sport is critical to its continued success. It was great to see Max and Jules developing during their debut season last year, rewarding our confidence in such a young but obviously talented line-up. I’m sure the fans are as excited as we are to see what our drivers can go on to achieve in their second season with us.”

“We are pleased to confirm that Max will continue with the Team into the 2014 season," John Booth, Team Principal, Marussia F1 Team. "In view of next year’s regulation changes, continuity is key, so it is highly beneficial to our technical team that we retain the same driver line-up moving forward. Max had an impressive debut season last year and, of course, achieved a new rookie record for finishing all 19 races. He can be justifiably proud of the progress he made through the course of 2013. With our race driver line-up complete we can now focus all of our attentions on our 2014 car and moving the Marussia F1 Team to the next level. After our success in achieving 10th place in the Constructors’ Championship, we have set our sights on a bigger and better 2014 campaign.”