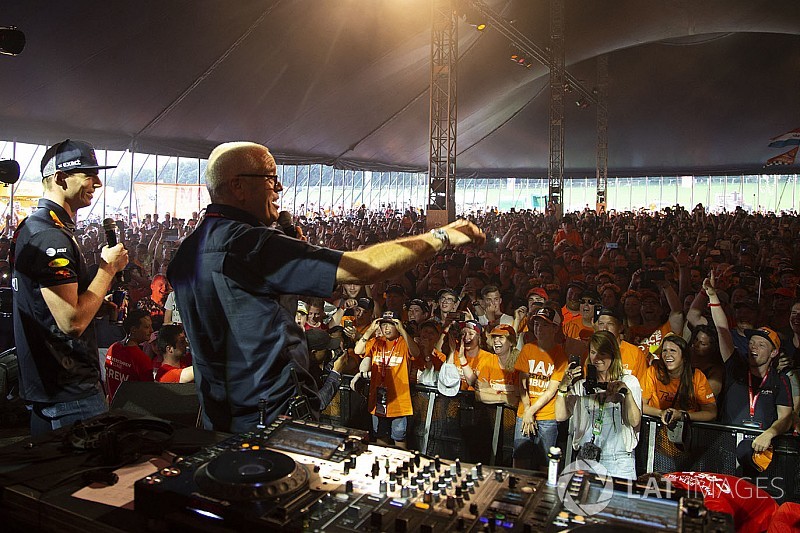 Max Verstappen says a visit to his fan village “gave me goosebumps”, as his adoring fans went wild for their hero on Saturday night.

Verstappen has been in no shortage of support this weekend in Austria, given all the orange on the grandstands around the Red Bull Ring. A large chunk of the Dutch crowd has been staying in the Max Verstappen Village, so Motorsport.com went along to sample the atmosphere.

An estimated 18,000 Verstappen fans have travelled to Austria, and around 5,000 of them have been staying at his ‘Village’ this weekend. The enormous campsite is a stone's throw away of the Spielberg track and is situated on farm grounds, which during the rest of the year are home of a flock of sheep.

“It’s incredible to see how much orange came out here, and especially when I was in the Max Verstappen Village”, the Red Bull driver said after visiting on Saturday night. “When I walked onto the stage, it just gave me goosebumps. Really crazy, but a lot of fun.”

The last couple of years the Austrian Grand Prix already proved a very popular one amongst Dutch race fans, with a lot of them being seated on a special Max Verstappen Grandstand. But this year especially, the race has drawn a lot of orange thanks to the arrival of an entire ‘Village’.

“It’s because it’s the start of the summer holidays. So a lot of people go by caravan or camper to Italy, Spain and also Austria”, says Dennis van der Veen, operations manager at SportStadion, the company who took the initiative for the campsite. “And on the other hand, the track itself is really popular, because it has amazing views. The grandstands are high, so you can see a lot of the cars. It’s open. And it’s really easy with transportation.”

The Max Verstappen Village offers a wide variety of accommodation types, from small tents to luxury hotel rooms. The whole fan area has been brought over from the Netherlands.

“Everything you see here, it’s all from the Netherlands”, Van der Veen says. “Why did we bring everything? Because in the Netherlands festivals are really popular.

“We have a lot of festivals so the whole structure for creating festivals is there. You don’t find this in Austria. So what we’ve done is that we brought a total of 30 trucks with equipment and we’ve been building two weeks to create this huge campsite.”

SportStadion is looking to setup a Max Verstappen Village at more Grands Prix from next year onwards. “We see there is a big market in creating an experience apart from the race”, Van der Veen says. “The race is an experience, but we want to show people that there is much more to do and that we can organize that.

“We have a F1 simulator here, children can play here, we’ve got entertainment, there is a full concept restaurant, the sanitary is premium and all very clean. So we do much more. Next year, if possible we would like to do this at three Grands Prix. We are currently in discussion with many other circuits to see what’s possible.”

The Max Verstappen Village has also piqued the interest of others teams and drivers in the F1 paddock. Stefan van den Berg, managing director at SportStadion, says: “We want to start working together with more racing teams, not only Red Bull. We are a partner of Red Bull now, but there is also interest coming in from other racing teams. And even managers of some drivers got interested.”

Also companies who are involved in F1 have showed interest in this new way of fan engagement. “Normally they spend it on media or they spend it on the track with signage. But what I've learned so far that a lot of those corporates are searching for a way to interact in a better way directly with an audience, with the clients, with the fans", Van den Berg elaborates.

“For example, here in Spielberg we work together with Unilever, Heineken, Jumbo and Vodafone. And basically we support them in direct interaction with their clients. This is good for them and it is good for us. I expect a lot more cooperations with big companies around the world.

SportStadion is also looking beyond Formula 1. Van den Berg: "So this here is about F1. But the plan is also to start expanding this idea of full customer centric fan engagement model to other motorsports like MotoGP, World Cup Endurance and motocross. We are talking with stakeholders from those branches and they are really definitely interested.”