McLaren CEO Zak Brown says new drivers Carlos Sainz and Lando Norris have played a key part in setting up the team's current position at the top of Formula 1 midfield. 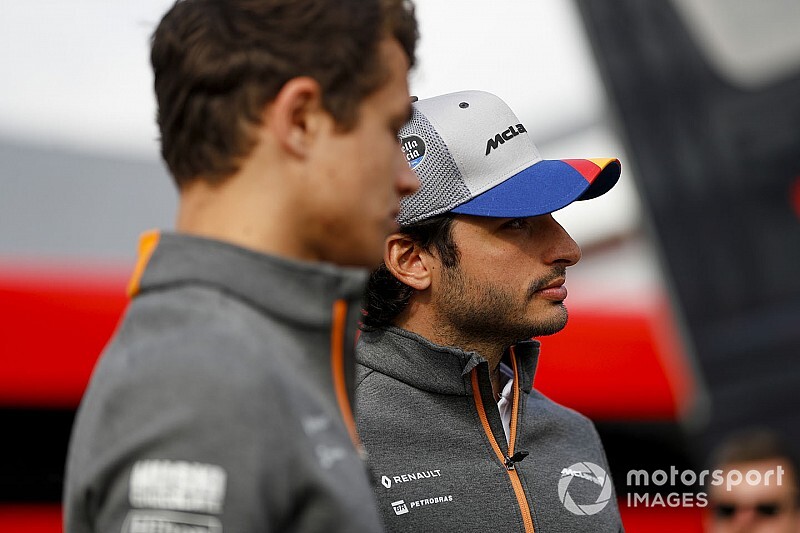 McLaren currently lies fourth in the world championship, having regularly won the “best of the rest” midfield battle in recent races.

And Brown believes it is not just the improved MCL34 but strong performances from the two drivers that have given McLaren an edge over its nearest rivals.

“We’re very happy with both our drivers, they’re both very quick they get along very well, they drive for the team. That’s what I think I’m most pleased with," Brown said.

“If you look at our competitors, I think one of the reasons that we’re currently fourth in the championship is a lot of credit to our drivers both bringing it home, whereas you look at some of our competitors I think their cars are as quick as ours if not quicker at times, but they have one driver that’s strong, or no drivers that are strong.

"I think our driver combination deserves a lot of the credit for where we are right now.”

Brown conceded that opting for Norris, who had been promoted from F2 to replace Stoffel Vandoorne, had involved risk.

“I think any time that you have a rookie there’s risk in that. Carlos we’d watched very closely, so we were very confident in Carlos. That’s why we put Lando in those FP1s [in Belgium and Italy], it was to see how would he react when he was up against Stoffel, and then he was up against Fernando [Alonso].

“That got us more comfortable. That was kind of the final test. I think it’s definitely turning out to be the right decision, our driver line-up. Hence our early commitment to our driver line-up for the future.”

Brown downplayed the suggestion that McLaren is now clearly the fourth-best team on the grid.

“I’m not sure we’re solidly the best team in the midfield, as it’s so close, that’s why we need to keep our head down. We’re early enough in the season that you can go from fourth to eighth in no time.

“Our goal was to improve on last year, and in reality we were seventh, not sixth, because of the whole points situation [with Force India].

“I’m pleased with how we’re doing. We have to keep our head down and stay focussed, because a bad weekend by us and a good weekend by somebody else, you can fall down the order quickly.”

However, he'd conceded that the team's improved form has made attending grands prix a lot more enjoyable than it had been previously.

“It’s fun to come to the race track now,” said Brown. “It wasn’t fun the last couple of years. We’re just trying to consolidate where we are, the drivers are doing a good job, Andreas [Seidl, new team boss] is settling in well, and development is underway on next year’s car.”

Asked by Motorsport.com if that fun element was purely down to improved performance, he said: “Just the racing. You show up to the race track, you’re in the garage, and you want to cheer for your team, the adrenalin of fighting for Q3 – there’s not much of an adrenalin rush fighting for Q1, and that’s what we were fighting for last year, especially the second half of the year.

“Clearly we’ve got a better car this year than last year, but we started OK last year and declined as the season went on, or didn’t improve as everyone else improved. By the end of the year we were the eighth, ninth, tenth car. I want to make sure we don’t have a repeat of that.”