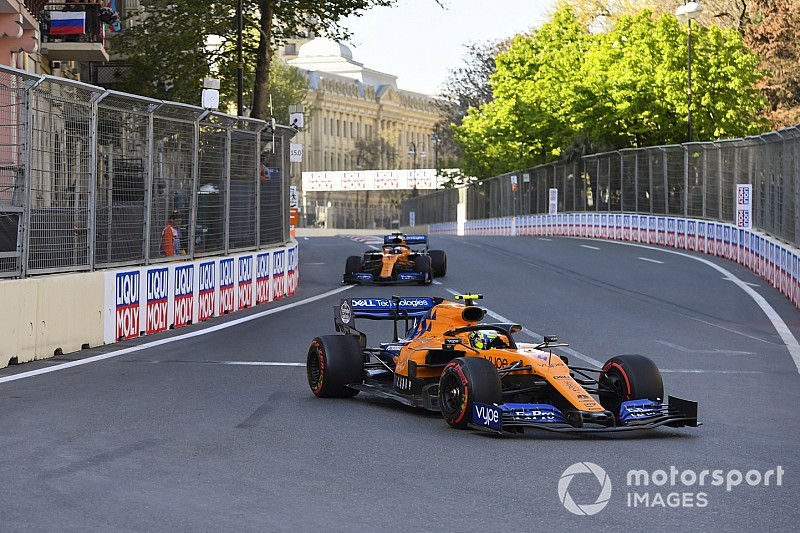 McLaren racing director Gil de Ferran says the team's decision to swap its drivers and give Lando Norris an extra pitstop in Azerbaijan was an "aggressive and defensive" choice.

Having qualified ahead, Norris had run ahead of Sainz throughout the race.

In the closing stages the pair had such an advantage over the cars behind that there when the virtual safety car was deployed it was a possible to do a free pitstop that would not cost a position to another team.

Norris was ahead of Sainz but, having made his first stop four laps earlier, the Englishman was on older tyres, and there were concerns about how they would behave at the resumption after the VSC.

The McLaren pit wall thus elected to stop the rookie, dropping him behind Sainz, but without impacting the team's overall haul of points.

The potential upside for Norris was that had a late safety car subsequently closed up the field his much fresher final set could have given him an advantage.

"That was a strategic decision that was designed to be both aggressive and defensive at the same time," de Ferran told Motorsport.com. "We obviously had a free pit stop.

"Because we didn't run on Friday there was some uncertainty as to whether the tyres were going to be able to restart well, being quite worn, on a late safety car. There was also some concern over were they going to be able to last the race in a good way.

"By doing a pi stop we protected ourselves against that eventuality with one of the cars, and also put ourselves in a position where if the soft came into the window better late in the race we could have been in a strong position to attack.

"None of that happened, but it was a piece of risk management that we deployed because we had the opportunity to do so."

Norris said he had no problem with the decision to pit and drop him behind Sainz, despite losing two points from his personal tally.

"It's not an easy place to turn the tyres on and get them working," he told Motorsport.com. "The main thing that didn't play into our favour is the temperature, the ambient temperature.

"What's gone on in the past, in practice and P3 and qualy, is people aren't able to turn tyres on when they get cold, and we were just banking on that a little bit more, and hoping that after the safety car they wouldn't be able to get the tyres to work as well. But it was almost the opposite.

"They gained quite a bit of pace, and I was dropping even the last couple of laps. I didn't have the pace. It was a good decision for us to make, a good thing to try, as a team. It was only me who lost a couple of points, or a point, whatever it was.

"As a team, we didn't lose or gain, so it was a good decision, just didn't turn out how we wanted it to."

How the Senna myth has been transformed