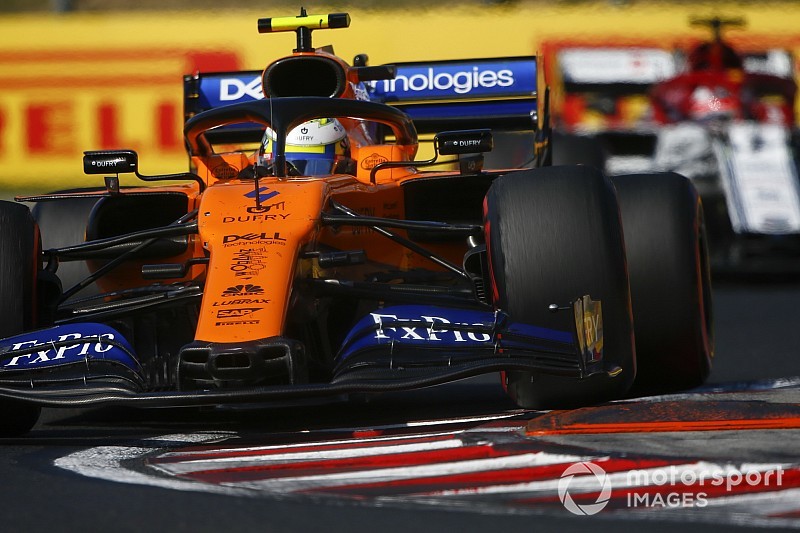 McLaren has revealed that a wheelgun failure was to blame for the slow pitstop that cost Lando Norris the chance to help deliver its best result of the season in the Hungarian Grand Prix.

Norris had looked on course to follow teammate Carlos Sainz home at the Hungaroring, with a potential fifth and sixth-place finish on the cards.

But it all went wrong during Norris' only pitstop when a problem changing his left rear wheel cost valuable seconds that allowed other cars to get the jump on him.

As well as losing two positions, the delay dropped Norris into the clutches of the recovering Valtteri Bottas, who managed to overtake him and snatch eighth near the end.

McLaren team principal Andreas Seidl apologised to Norris for what happened, but said that an unexpected equipment failure had been the culprit of the young Briton coming home ninth.

"Unfortunately we had an issue with the left rear wheelgun which caused a delay in the tyre change," said Seidl. "In the end that lost him two positions, plus allowed Bottas to get close to him in the race and get him as well.

"Sorry from our side to Lando that he was unlucky, because in terms of driving he pulled off a great performance. But these things happen in racing."

Although slightly disappointed with the result, Norris said he did take encouragement from the performance of the car at a track where the team had not been expecting great things.

"We had good pace, so it's glass half full, let's say," said Norris. "There was good potential, the car got a good result, so there's a lot of positives and just one negative.

"It happens sometimes and it's just that the pitstop wasn't great on my car. Generally the team have done a very good job, and I have to give them a lot of credit.

"They've done a very good job all season, especially compared to last season, where they were struggling a bit more in the pitstops. So we still made good progress, just today was a one off."