Ron Walker will retire after the 2015 event.

Mar.21 (GMM) The long-serving chairman of Australia's Grand Prix in Melbourne is stepping down.

Ron Walker, a stalwart of the almost twenty-year-old Albert Park race and a close friend and political ally of Bernie Ecclestone, will retire after the 2015 event.

"I'm 75 this year and it's good governance to let someone fresh take the reins," he told News Limited publications in Australia. 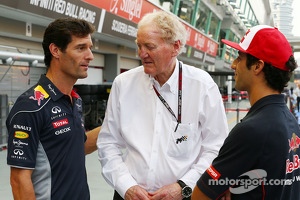 "It's not public knowledge," said Walker. "We haven't made the announcements, because we wanted to continue to do what we do without any fanfare."

The fact that Harnden will only take over for the 2016 race is a clear sign that Melbourne wants to keep the Grand Prix beyond its 2015 contract.

Walker, who was recently battling lung cancer, revealed last week that he has negotiated a basic new deal with Ecclestone.

"I think the foreplay is over so to speak and it's now a case of talking to the government about whether it is worth it or not," he is quoted by the AFP news agency.

"I think everyone in the government wants the race. The assessment is going to be made over the price," Walker added.

He told News Limited: "We are asking for three extra years. We are not like the Arab states and some other countries -- we have to be very careful the way we spend taxpayers' money."

The late Ayrton Senna honored on his birthday with Google Doodle