Bottas was close to "big trouble" in Spain - Mercedes 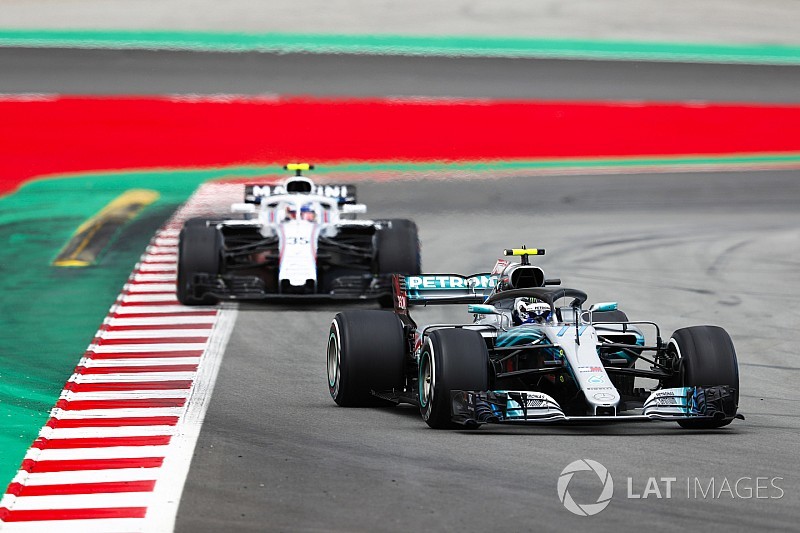 Mercedes has admitted that the decision not to pit Valtteri Bottas for a second time in the Spanish Grand Prix was "extremely marginal" and that the Finn was close to being "in big, big trouble".

Bottas stopped for medium tyres on lap 19 in Barcelona - six laps before teammate and race winner Lewis Hamilton - and had to run 47 laps to the chequered flag.

Mercedes opted not to bring Bottas in for new tyres when Vettel pitted under the late Virtual Safety Car, preferring to jump the Ferrari and gain track position, which ultimately paid off in securing second place.

"It's fair to say that it was extremely marginal," chief strategist James Vowles explained in a Mercedes video.

"It's fair to say that if the race had been a lap or two longer, we could have been in big, big trouble."

Vowles admitted the call left Bottas in a "very difficult position" and gave credit to the Finn for managing to bring the car home in second, maintaining a gap over Red Bull's Max Verstappen and Vettel.

"The last few laps of the race for Valtteri were very, very tense," Vowles recalled. "We knew that the front left tyre would be very much down to zero rubber remaining. And it's a very difficult call as to what's going to happen.

"But he had eight seconds of race time relative to the Red Bull behind, and what we were trying to do was very delicately use up some of that race time to slow down in some of the key corner sequences to make sure we looked after that tyre whilst not losing temperature in the rubber that was still actually left on it.

"It's a very, very delicate balance, and I really can't understate this, Valtteri did an absolutely incredible job. We put him in a very difficult position, and he dealt with it absolutely perfectly, taking that tyre just to the end of the race as we asked him to do."

Explaining why Mercedes had opted for the strategy in the first place, Vowles said he was confident Red Bull was "absolutely going to make the one-stop work" and did not want to give up track position.

"What we concluded based on all the evidence that we had is there was as strong possibility of Vettel taking it [the stop], and it's extremely unlikely that anything else would have happened if we took it, rather than just staying behind Vettel, and Red Bull, and therefore finishing lower than the P2 that was the potential in the car.

"We decided to take the risk, we took the tyres to the end of the race. It was extremely close, it was a very tight judgement call, but it ended up on the right side for us on that occasion."