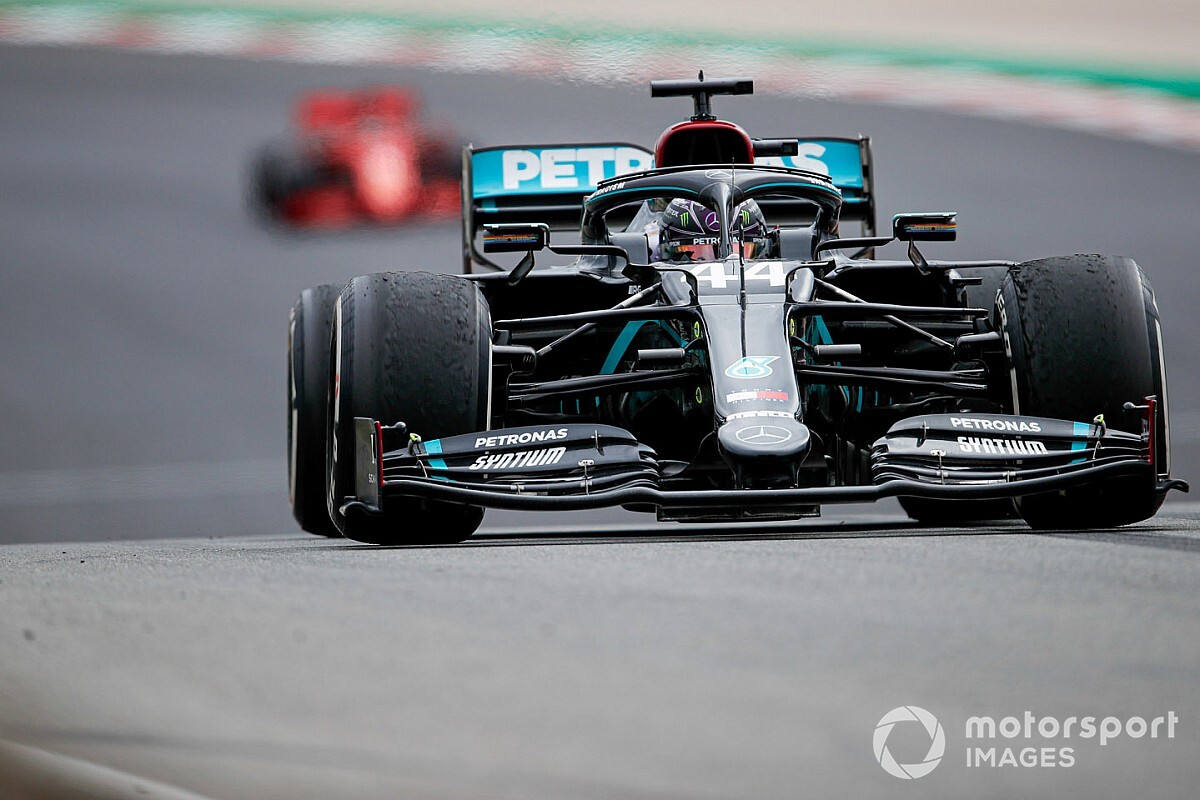 Hamilton swept to his 92nd career victory after recovering from a poor start in low grip conditions to pass teammate Valtteri Bottas during the first stint, before going on to win the race by over 25 seconds.

Hamilton said after the race that he had placed a particular focus on race set-up at Portimao after struggling through much of the weekend in the low grip conditions, with cooler weather conditions and some spots of rain also making the start more difficult.

Mercedes F1 trackside engineering director Andrew Shovlin explained after the race that a decision was made to use a wing level that offered Hamilton and Bottas more downforce from Saturday onwards.

Shovlin said the set-up direction taken by Hamilton aided his tyre management and warm-up, which proved particularly decisive against Bottas. The Finn's pace faded towards the end of the opening stint, leaving him nine seconds off his teammate in the lead ahead of the pitstops.

"On Saturday morning, we tried two different wing levels," Shovlin explained. "We'd started the weekend with a lighter wing, and I think it was definitely the right decision to go for.

"The more downforce would have helped us today, and whether the drops of rain would have turned into a proper shower.

"But [Hamilton is] more talking about how he got the balance of the car to sort of use the tyres not be too hard on either end. Qualifying was really all about warm-up, getting the temperature there.

"In the race, it's the left-hand-side tyres that get a hammering here, and just not working the front or the rear too much, because then the balance starts to get away from you.

"Lewis is just naturally good at managing the tyres. He's got this really good feel for where he's hurting them. And he's able to keep the rubber on them."

Bottas had a request to take soft tyres for the second stint of the race turned down by Mercedes, who kept him on the identical strategy to Hamilton by giving him a set of hards.

While Bottas had reported a vibration on his tyres that meant he had to pit, Hamilton said his mediums felt in good shape, and that he could have gone further into the race before pitting.

After their stops, Bottas then saw the gap to Hamilton grow after he encountered lapped cars when exiting the pits, causing him to back off and fail to get his tyres up to temperature.

"I think the key thing here is the tyre temperature, because if you can generate temperature, your grip goes up," Shovlin explained.

"We spend 90% of races where we've actually got too much of it, and it's a case of trying to keep the tyres cool, but you're in the opposite situation here in these cold conditions made worse with a bit of light rain kicking around.

"It was most evident on that hard tyre transition. So Lewis actually got it to work quite well, quite quickly. Valtteri dropped into some backmarker traffic, which meant he was having to run at their pace, not the natural pace, and at that point, there was about 10 degrees of difference in the tyre temperature.

"You can see that it was manifesting itself as near enough a second of lap time. So the key is all in that temperature difference."